The pick of the morning's,media 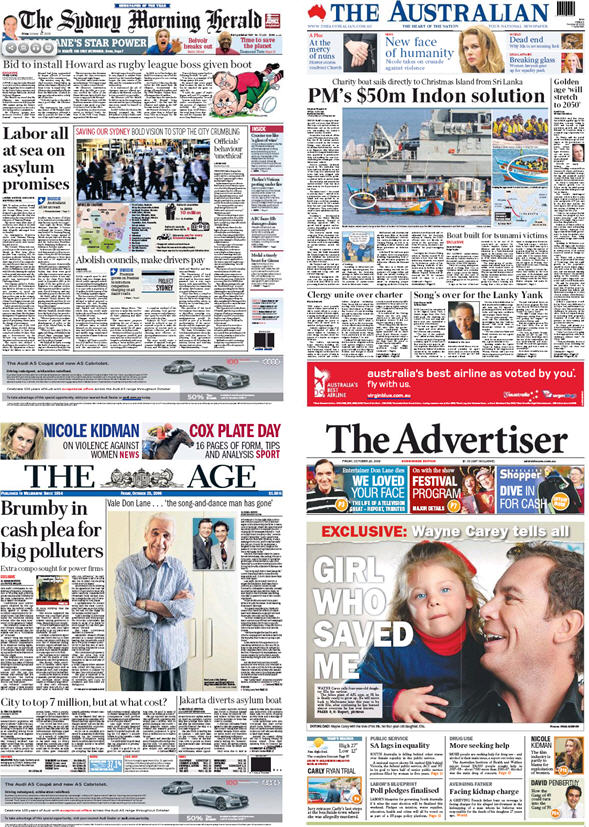 Chaos as Jakarta diverts asylum boat – The the issue erupted in Federal Parliament, where Opposition Leader Malcolm Turnbull was forced to distance himself from a claim by maverick Liberal Wilson Tuckey that there could be terrorists on boats that come to Australia – Melbourne Age

Kevin Rudd to ponder citizenship laws as Sheik Haron accused of harassing dead Digger families – The case is certain to raise debate over whether migrants guilty of hate crimes against the nation should be deported, even if they have citizenship, but Mr Rudd said he could not comment immediately – Sydney Daily Telegraph

Golden age ‘will stretch to 2050’: Ken Henry – Treasury chief Ken Henry has outlined a golden age for the Australian economy lasting to 2050 and beyond, as rapid population growth and Asian demand for resources bring a sustained surge of global investment – The Australian

Pension grab to be blocked – The Treasurer, Wayne Swan, will confront his state counterparts today over their plans to plunder the recent increases granted to pensioners by lifting rents for public housing – Sydney Morning Herald

Election spending record a year late – The Health Services Union has disclosed that it spent $599,184 on political campaigning and donations in the 2007 election year, with a significant slice of these funds believed to have been used to back its former national secretary, Craig Thomson, for the NSW Central Coast seat of Dobell – Sydney Morning Herald

Barry O’Farrell stoking the Liberal fires – Say what you like about Barry O’Farrell. Many have and many will. But he has quietly achieved in Opposition what Nathan Rees has failed to do in Government. He has unified his parliamentary wing and the party organisation – Sydney Daily Telegraph

Labor Party to unveil SA State Election 2010 policy – Economic growth and more jobs will be Labor’s prime objectives if it wins the State election in March. The SA Labor Party’s election platform – including pledges on tax, water, health and crime – will be finalised this weekend – Adelaide Advertiser 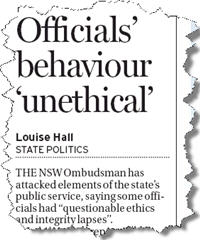 Officials’ behaviour ‘unethical‘ – In his annual report, Bruce Barbour accused various agencies of withholding information, cited cases of police officers lying to protect one another from disciplinary action, and detailed an incident where WorkCover failed to protect the public from asbestos exposure – Sydney Morning Herald

Agencies criticised over FOI requests – The NSW Ombudsman’s annual report has condemned a number of agencies, including the Board of Studies and the Roads and Traffic Authority, for their handling of freedom-of-information requests – Sydney Morning Herald

How busy is Tim Fischer, senators ask – Coalition senators have vigorously attacked the role being played by the former National Party leader Tim Fischer as ambassador to the Vatican, saying their one-time colleague could hardly find enough to keep himself occupied there – Sydney Morning Herald

Our sexist public service – Contrary to State Government claims that it is achieving equality for women in the public service, South Australia’s efforts are falling behind those of other states. A national report by the West Australian director of equal opportunity – which ranks that state worst – shows SA has slipped from third best in filling senior executive positions with women to fifth best from 2006 to 2008 – Adelaide Advertiser

Abolish councils, make drivers pay – The Association of Consulting Engineers Australia yesterday released a radical proposal to transform the way housing, transport and utilities are planned, funded and developed, which they say would make Sydney the world’s most liveable city within 40 years – Sydney Morning Herald

Canberra ‘too remote’ to run state health – State Health Minister Daniel Andrews has cast doubt on Canberra’s ability to run Victoria’s health services, signalling a new level of opposition to a proposed federal takeover. In a speech yesterday, he painted the capital’s health bureaucrats as remote and incapable of understanding the day-to-day needs of patients – Melbourne Age

Charge for road use, Rees urged – A leading think tank has urged the NSW Government to ration the use of Sydney’s roads by introducing congestion charges – Sydney Morning Herald

Swanston Street ‘fix’ down to four options – Melbourne City Council yesterday released four design options to fix the trouble-plagued spine of the city, one of which will be used to develop the new Swanston Street plan – Melbourne Age

Military opts for US chopper – In a classified submission sent to defence ministers John Faulkner and Greg Combet, the military chiefs have opted for the US Navy’s MH-60R Seahawk as the best choice for the Royal Australian Navy’s new rotary wing anti-submarine warfare platform – The Australian

Australians all let us react, says the right – Richard Ackland in the Sydney Morning Herald laments the nastiness of the phoney moral panic about boat people.

Coalition misses boat – Dennis Shanahan in The Australian sees the debate on asylum-seekers having the potential to fundamentally change the politics of border security and give Labor the upper hand. By using tough talk, Rudd is playing the hard man on populist appeal and, while his ministers talk about treating asylum-seekers humanely and with dignity, he’s catching the Coalition in a cleft stick while trying to appeal to both ends of his own support base.

Don’t sell the farm, says BHP chairman – BHP Billiton chairman Don Argus has dramatically escalated the foreign investment debate, saying Australia needs to form fresh policies to ensure local investors are not squeezed out of the country’s natural resources as China and India prepare for a phase of growth even greater than the previous boom – The Australian

What a difference four degrees makes: warming’s extra toll – The British weather bureau’s Hadley Centre for Climate Prediction has produced a map charting the different regional temperature increases across the globe, if average global temperatures rise by four degrees due to unchecked global warming. The map shows temperature increases will vary significantly across different regions of the world, but that on average land surfaces would be 5.5 degrees warmer as early as 2050 – Sydney Morning Herald

Emissions scheme compo limited – The Government’s emissions trading scheme is not a ”bottomless pit” of money, and Opposition amendments will have to be financially responsible, the Climate Change Minister, Penny Wong, warned yesterday – Sydney Morning Herald

Brumby in cash plea for polluters – The Rudd Government is considering giving extra compensation to Victoria’s high-polluting power stations after lobbying by the State Government, according to leaked documents – Melbourne Age

$47 million in rural drought help unveiled – Announcing the package during a flying visit to the Wimmera, Premier John Brumby said it showed the Government had stood by Victorian farmers throughout the extended drought – Melbourne Age

Ten spills red ink but expects upturn – Television broadcaster Ten Network says a sharp rebound is under way in the Australian economy. According to executive chairman Nick Falloon, “positive signs have increased” in recent weeks in advertising, and Ten was likely to return to profitability next year – The Australian

Clergy unite over human rights charter – The nation’s most powerful church leaders have united in a bid to scuttle efforts to create a national charter of human rights, warning the Rudd government it could curtail religious freedoms and give judges the power to shape laws on issues such as abortion and gay marriage – The Australian

James Packer’s £20m polo plan opens old wounds in the countryside – The village of Selham, with its tiny 11th-century church, pub and scattering of houses, is a world away from the yachts and casinos that James Packer, the billionaire Australian businessman, is used to. But the son of Kerry Packer, the late media tycoon, is facing a showdown with the residents after he choose the West Sussex village as the site for a £20 million polo centre – London Daily Telegraph