“We don’t want to develop a reputation of having a two-tier immigration system – one tier for legal, law-abiding immigrants who patiently wait to come to the country, and a second tier who seek to come through the back door, typically through the asylum system. We need to do a much better job of shutting the back door of immigration for those who seek to abuse that asylum system.”

Canada’s Immigration Minister Jason Kenney read from the same script as the Australian Prime Minister Kevin Rudd as he welcomed 76 men believed to be from Sri Lanka who arrived on a rusty boat off Canada’s West Coast. Mr Kenney is as determined as his Australian counterparts to battle the perception that his country is a soft touch for asylum seekers. 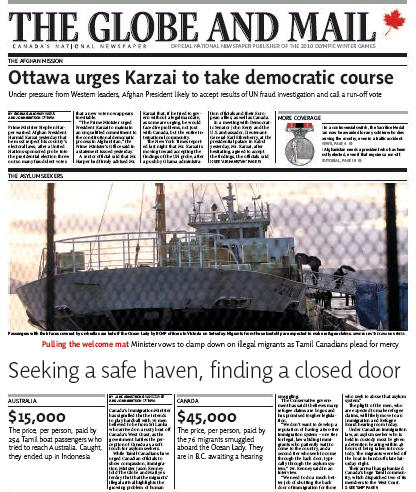 ‘Humanitarian’ boatpeople deal breaks deadlock – Kevin Rudd and Indonesian President Susilo Bambang Yudhoyono last night resolved their standoff, with Jakarta agreeing to accept 78 asylum-seekers rescued by Australia at the weekend, citing the plight of a sick child on board – The Australian

Deal struck on fate of asylum seekers – Indonesia will take the 78 asylum seekers on board an Australian Customs ship, in a diplomatic breakthrough in talks last night between Prime Minister Kevin Rudd and President Susilo Bambang Yudhoyono – Melbourne Age

Call for compassion before politics – One of the nation’s leading industry figures has slammed the tawdry politics surrounding asylum seekers and called on the major parties to adopt a bipartisan approach for the good of the nation. Heather Ridout, the chief executive of the Australian Industry Association, said the shrill politics surrounding asylum seekers was ”causing the worst possible outcome” – Sydney Morning Herald

Reserve Bank wary over inflation – The Reserve Bank is worried that even with rising interest rates over the next year, inflation may again escape its control as an Asian-driven resources boom gathers strength – The Australian

Painful adjustment for spendthrifts – Paul Kelly in The Australian writes that Ross Garnaut has given a sharp warning to the Rudd government by arguing that the global financial crisis legacy for Australia is more serious than has been assumed and that the community has “barely begun” to grasp what lies ahead. Garnaut told a Lowy Institute audience on Monday night that Australia should expect a contraction in living standards. His concern was that “the Australian community has not focused at all on the difficulty of the task” – The Australian

Buswell’s errant expense claim – Treasurer Troy Buswell has slipped up on his parliamentary expenses, claiming a living-away-from-home accommodation refund he was not entitled to – and now the Opposition says he should be sacked. An investigation by Channel 7 has revealed Mr Buswell claimed $240 for staying at his home-away-from-home in Shenton Park on July 15 this year, when he was in fact at his home in Busselton – The West Australian

Trust me, mate, she is ideal: Burke – Choking back tears, Brian Burke acolyte and former West Australian minister Norm Marlborough said the corruption investigation into his dealings with the former premier had shattered his life. Taking the stand at his trial in Perth’s District Court yesterday, Mr Marlborough admitted he could not “just say no” to the former premier “He’s a mate. I’ve spoken to him about hundreds of things I didn’t want to upset him, I didn’t want to hurt him,” he said – The Australian

Lobbyists who lunch – If only the walls of a Leichhardt restaurant could speak, writes Andrew Clennell in the Sydney Morning Herald of a Graham Richardson lunch.

Japan’s first lady wins award for looking good in jeans – “I’m very honored to be given an award I had been longing for,” said the 66-year-old fashion-conscious wife of Prime Minister Yukio Hatoyama at a ceremony for the Japan Jeans Association’s annual “Best Jeanist 2009.” – Mainichi Daily News

Julia Gillard’s ‘secret deal’ for Construction Forestry Mining and Energy Union – Julia Gillard has changed the rules for assessing workplace agreements on taxpayer-funded construction projects, provoking employer claims there will be a return to unproductive work practices throughout the building sector – The Australian

Rudd can chart a new course – Shaun Carney in the Melbourne Age writes that the asylum seekers debate boils down to values, and the Government can, if it wants, set a humanitarian tone.

Rudd ambition needs urgent action – Patrick Walters in The Australian writes of the problems with the Collins class submarines that need to be dealt with before Australia embarks on acquiring a dozen of the next-generation boats.

Human rights alongside national values – Tim Soutphommasane, the author of Reclaiming Patriotism: Nation-Building for Australian Progressives, turns to Hobbes to explain the behaviour of Sri Lankan boat people – The Australian

Our Obama beats theirs – Janet Albrechtsen has found an Australian who, like Barack Obama, knows how to harness language to further his success but also how to use that gift for a greater good rather than just empty rhetoric – The Australian

Treasury must reassess policy – Michael Stutchbury in The Australian asserts that the Reserve Bank is now more worried about inflation than the Rudd government’s insistence on stimulating the economy to protect jobs.

Pakistan urges Nato to seal Afghan border – Pakistan on Tuesday urged Nato troops stationed in Afghanistan to share intelligence and seal the border as it mounts a massive offensive against Taliban militants in the lawless northwest – Dawn, Pakistan

Automakers in Japan See Two Paths to ‘Green’ Cars – At the Tokyo Motor Show, which starts Wednesday, Toyota is banking on gasoline-electric hybrids — and Nissan and Honda on fully electric cars — as Japan’s top automakers jostle to dominate the next phase in green technology – New York Times

Clash on red gum logging revealed – Recently released documents have revealed the battle within the Rees Government over logging in Riverina red gum forests. The row climaxed with a dramatic stand-off last month when the Primary Industries Minister, Ian Macdonald, barred officers from the Department of the Environment from entering the forests after he discovered they were on their way to assess them – Sydney Morning Herald

Trafigura: anatomy of a super-injunction – As the ‘super-injunction’ obtained by oil-trading firm Trafigura and law firm Carter-Ruck is published for the first time, the Guardian’s editor Alan Rusbridger offers a clause-by-clause guide – London Guardian

‘Strange’ questions stun applicant for racing job – A high profile candidate for a key role in running Queensland’s racing industry was asked in the job interview what school he attended and if he was a practising Catholic, a court heard yesterday – Brisbane Courier Mail

Gamblers face a cap on what they risk – Poker machine users will be forced to cap the amount of money they risk when gambling, under a proposed shake-up to be recommended by the Government’s economic adviser today – Sydney Morning Herald

Sex-claim sailors were ‘railroaded’ – The navy knew within days that claims crewmen ran a competition on how many female sailors they could sleep with were false, but did nothing to set the record straight, the Federal Opposition claims – Melbourne Age

Pope Sets Plan for Disaffected Anglicans to Join Catholics – In an extraordinary bid to lure traditionalist Anglicans en masse, the Vatican on Tuesday announced that it would make it easier for Anglicans who are uncomfortable with their church’s acceptance of women priests and openly gay bishops to join the Roman Catholic Church – New York Times

No excuses, all pools must be fenced – All home owners with backyard swimming pools, including those on waterfront properties, will be forced to install fences under tough laws to be introduced by the State Government – Sydney Morning Herald