The political talk goes on over boat people and emissions trading

‘Thousands more’ Tamils to come – People smuggling networks are moving to bring out thousands more Tamils from war-ravaged northern Sri Lanka, according to the leader of 254 Tamil asylum seekers who have refused to leave their boat moored at an Indonesian port for eight days – Melbourne Age

Apology over scum ‘slip’ – A Territory politician has apologised for calling asylum seekers “scum” – but maintains it was a slip of the tongue. The CLP’s Adam Giles yesterday made a personal statement to parliament saying he “inadvertently confused people traffickers and asylum seekers” – Northern Territory News

Unions warn PM over boatpeople – Kevin Rudd is facing growing grassroots anger over his tough rhetoric on boatpeople, with two of the labour movement’s most powerful unions warning the Prime Minister against demonising refugees – The Australian

Richo avoids a public grilling by using back door – Kate McClymont in the Sydney Morning Herald writes that yesterday Graham Richardson threw little light on the subject at hand – dealings his clients, the property developers Ron and Roy Medich, might have had with State Government or planning officials over their land at Badgerys Creek.

‘Scandals drive off corporate donors’: Graham Richardson – Political election campaigns will ultimately be funded by taxpayers as corporations shy away from donations following a spate of recent scandals, according to Labor power broker and lobbyist Graham Richardson – The Australian

Richo’s diary all in his head – Graham Richardson’s memory was put to the test in front of a state parliamentary inquiry yesterday as the Labor heavyweight admitted he keeps no notes. His diary is in his head, his invoices contain no details of the work he does for his millionaire clients and Mr Richardson never asks a client to sign a contract, instead they shake hands – Sydney Daily Telegraph

Disgruntled Liberal MPs slam Baillieu’s leadership – Victorian Liberal MPs have launched a scathing attack on their leader Ted Baillieu, with one saying he is leading the party ”to the slaughter” at next year’s election. In a fresh outbreak of disunity, MPs have told The Age that Mr Baillieu is invisible, ”highly removed” from his party and protected by a ”praetorian guard” of supporters – Melbourne Age

Ted Baillieu’s tall order – David Rood in the Melbourne Age writes how the most recent Victorian Newspoll, published in August, shows the Baillieu Liberals lagging behind the Brumby Government 44 to 56 per cent, worse than the result at the 2006 election. If the August poll result was repeated in 2010, the Liberals would be at risk of losing three lower house seats.

Support for Liberals slides to just 30pc: Newspoll – Support for the Liberal Party has dropped to its lowest level since June last year. Dissatisfaction with Malcolm Turnbull has leapt back to near what it was in the aftermath of the fake email affair in August, as the Coalition remains divided on an emissions trading scheme. Even a small rise in dissatisfaction with Kevin Rudd’s management, during a period dominated by boatpeople arrivals in Australian waters, has failed to help the Coalition – The Australian

First Rudd, now G-G’s staff desert – And we thought Kevin Rudd was the nation’s toughest boss. It turns out the Prime Minister has to fight for the honour with Australia’s first female Governor-General Quentin Bryce. The Federal Government revealed yesterday that since Ms Bryce was sworn in as the country’s 25th Governor-General in September last year, about 30 staff had left Government House – Sydney Daily Telegraph

Loss of staff puts Quentin Bryce in hot seat – One-third of the Governor-General’s staff has left in the past 12 months, prompting fresh criticism of how Quentin Bryce operates. The turnover of personnel at Government House in Canberra will reinforce the reputation Ms Bryce gained as Queensland governor for being difficult to please – The Australian

Welcome to Minnesota, NSW – The Rees Government’s $2 million economic stimulus advertising campaign will be investigated following a series of embarrassing revelations from breaching advertising regulations to using images of a US city to represent Sydney in commercials – Sydney Daily Telegraph

Costello bows out with a predictable sideswipe – Peter Costello, the nation’s longest-serving treasurer, exited politics yesterday declaring the Rudd Government did not need to stimulate the economy to shield it against the global economic crisis – Sydney Morning Herald

Newspoll blow for Turnbull – Dennis Shanahan in The Australian finds that the latest Newspoll survey contains not one good number, no solace and little hope for the man who has wanted to be leader for so long and who has been so keen to make leadership changes in the last few years.

One Nation voters can look to Joyce – John Pasquarelli writes i9n The Australian that 13 years after Pauline Hanson struck a chord with mainstream Australia, the vacuum she left when she departed the political scene remains unfilled.

Behold a tough new PM – Having spent months projecting himself as a benevolent leader splashing around billions of dollars in cash handouts and infrastructure payments, Kevin Rudd is refashioning himself as a policy tough guy at home and on the world stage, writes Malcolm Colless in The Australian

Battle of black holes and hollow logs – Stand by for the battle of the $6 billion black hole versus the $20bn hollow log, writes Lenore Taylor in The Australian. The black hole is what the government is likely to allege the Coalition’s amendments to the emissions trading scheme could cost the budget in just the first few years. The hollow log is the money from selling emissions permits the Coalition will allege is hidden away in the government’s long-term costings

Judges and juries called it as they saw it – Gerard Henderson in the Sydney Mrning Herald explains that there is considerable evidence that members of what is best termed the civil liberties lobby – including some journalists, lawyers and academics – do not want to accept that a few men in Western societies want to engage in violent jihad. The evident cynicism is not confined to Australia but extends to Britain and the United States, where acts of violence by militant Islamists have occurred.

Big-picture man with a yen to bond passes the bucks of Uncle Sam – Peter Hartcher in the Sydney Morning Herald writes of the new Japanese Prime Minister, Yukio Hatoyama, and his plans for an East Asian community that does not include the United States.

A race to the bottom – Tim Colebatch in the Melbourne Age on how day in, day out, Malcolm Turnbull and his colleagues have been slamming the Government for ”reckless spending”, ”spending like drunken sailors”. Every day they have demanded spending cuts – until Sunday, when they demanded more spending: tens of billions of dollars more.

Karzai to be forced into run-off – Afdghan President Hamid Karzai is set to be stripped of an outright win in the August presidential election, after UN fraud investigators last night disallowed hundreds of thousands of ballots cast for the incumbent – The Australian

Block Woolies hardware buyout, urge independents – Independent hardware store operators are urging the competition regulator to block a move by Woolworths to enter the home improvement sector, saying it will wipe out their businesses – The Australian

Farmers reject Nationals on carbon scheme – The Nationals have put themselves at odds with their traditional constituency by rejecting a National Farmers Federation demand they scrap their trenchant opposition to carbon emissions trading. And the Liberals have put climate change mavericks on notice that bucketing their own party could lead to disciplinary action, amid claims of disloyalty and threats to preselection – The Australian

Presenter sorry for loopy polly moment – An ABC news presenter has apologised to a Coalition senator after she was caught on air pulling a face and twirling a finger to suggest he was crazy. ABC2’s Virginia Trioli was shown making the gesture on ABC News Breakfast just moments after vision of Nationals Senator Barnaby Joyce talking about the Government’s proposed Emissions Trading Scheme to tackle climate change was aired – The Australian 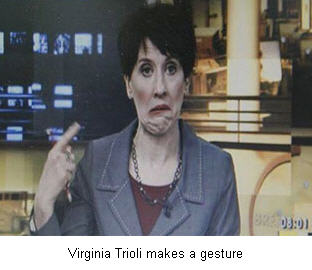 If you think I’m crazy, have a look at the ETS – Senator Barnaby Joyce reckons the true insanity is that so many media commentators think that this ETS thought bubble won’t turn into an economic nightmare – The Punch

Year 6, 7 students banned from displaying affection – Year 6 and 7 students who are “boyfriends or girlfriends” have been banned from hugging at a primary school that fears it sets a “bad example” to younger students – Adelaide Advertiser

Losses may be God’s will: Jensen – The Sydney diocese of the Anglican Church is fighting for survival after a catastrophic loss of $160 million on its once bountiful share portfolio – The Australian