Plenty of talking to come about emissions trading before a decision 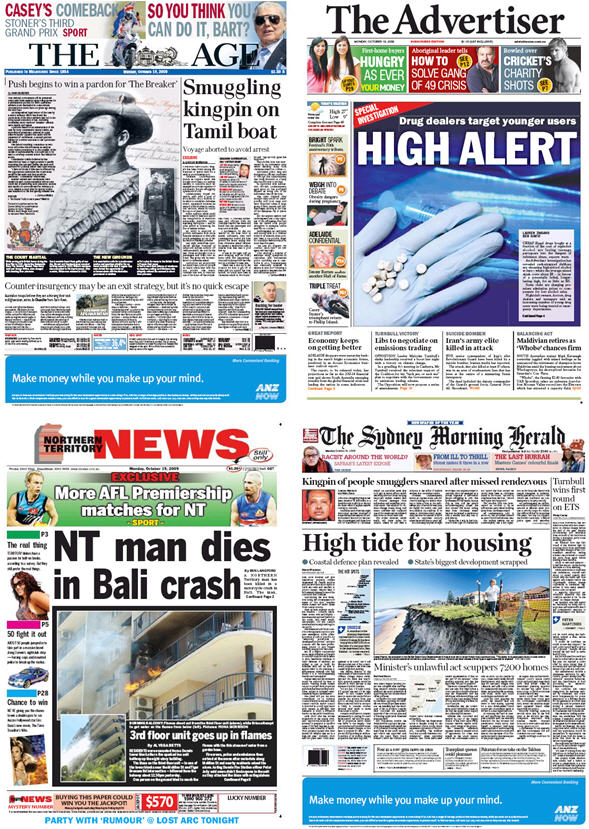 Business wish-list covers all Coalition bases – The Coalition has passed a business wish-list of amendments to Kevin Rudd’s emissions trading scheme that the government is extremely unlikely to agree to in its entirety, but which could form the basis for a deal – The Australian

PM heads to Jakarta over asylum seekers – Prime Minister Kevin Rudd will leave for Jakarta on Monday, where he will seek a solution to stem the influx of asylum seekers into Australian waters. The issue is shaping up as a test for the government, which has adopted a more compassionate border protection policy than its predecessors but is trying to portray a tougher image on the issue – The West Australian

Hostel in jobs furore, claims over foreign labour – A labour hire company is using a backpacker hostel in Cronulla as a way to tap into cheaper foreign workers. Unions have questioned the impact its practices had on Australian jobs – Sydney Daily Telegraph

Smuggler found on asylum boat – Sri Lankan asylum-seekers last night continued their stand-off, refusing to leave their boat in Indonesia as it was confirmed that a key people-smuggler responsible for the journey had been arrested – The Australian

Fourth Sri Lankan returned to Colombo – A fourth failed Sri Lankan asylum-seeker has been forced home by the Rudd government after the failure of his last-ditch appeal to the United Nations. Roshan Fernando was deported to Colombo on Saturday after the Department of Immigration was told the UN’s High Commission for Human Rights would not investigate his case – The Australian

Market bets on rates threepeat – Financial markets are betting the Reserve Bank will raise interest rates at each of its next three meetings, with the key interbank rate that tracks the cost of short-term borrowing jumping to an eight-month high – Sydney Morning Herald

Aboriginal jobs ‘stifled’ by legislation – Restructuring the lives of Aboriginal people away from welfare dependency was more than just ensuring children attended school, but was dependent on their getting real employment and the ability to own their own homes, Aboriginal leader Noel Pearson said yesterday – The Australian

Jobs watchdog takes union to court for strike – Unions are being targeted by the nation’s workplace watchdog, with 20 investigations being conducted into allegations of unlawful industrial action by workers – The Australian

Stuck in traffic with no-hopers, Nathan Rees abandons Sydneys congested roads – The Rees Government has abandoned Sydney’s 4.7 million motorists by admitting it does not have a single plan to fix the city’s most congested roads – Sydney Daily Telegraph

Celebrity banker at odds with his employer – Malcolm Farr in the Sydney Daily Telegraph explains how the era of the celebrity central banker is causing new problems for the Government as it struggles to be the sole authority on the economy.

Wong’s ETS unites foes on Left, Right – Glenn Milne in The Australian writes how Greens and Nationals are both opposed to the scheme and new evidence supports their cause.

Leader puts his judgment on the line – Malcolm Turnbull has won the battle. He’s yet to decide how to fight the war, writes Lenore Taylor in The Australian

Rudd buys off business on carbon trading – Ross Gittins in the Sydney Morning Herald suspects Kevin Rudd is indeed a man who can’t be trusted with the purse strings. A man too keen on making himself popular by giving away our money to powerful interest groups.

A bloody mob of hypocrites – Paul Sheehan in the Sydney Morning Herald describes how Australians (including himself) express outrage about the whales and the dolphins, but when it comes to hypocrisy about animal cruelty, we are world class. We hunt, slaughter and brutalise our national symbol while lauding, exploiting and symbolising it at the same time. Similarly, we don’t expend much curiosity about the abject conditions in the factory farms that produce our pork and poultry. 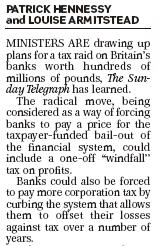 Tax raid on banks planned by ministers – Ministers are drawing up plans for a tax raid on Britain’s banks worth hundreds of millions of pounds – The radical move, being considered as a way of forcing banks to pay a price for the taxpayer-funded bail-out of the financial system, could include a one-off “windfall” tax on profits. Banks could also be forced to pay more corporation tax by curbing the system that allows them to offset their losses against tax over a number of years –The London Sunday Telegraph

Nine sacks five as plan fails to outsource bureau – After a plan to save $2 million by outsourcing its Canberra bureau to Sky News fell over, Nine has moved to cut costs by sacking five producers – The Australian

TV’s sports laws ‘ripe for change’ – Michael Lee, the former Keating government communications minister who helped create the anti-siphoning regime governing sports-watching in Australia, has hinted that reforms should be made, thanks to technological changes over the past decade – The Australian

Shared parenting laws on way out – The Rudd government is planning to roll back the controversial shared parenting law passed in the final term of the Howard government, enraging men’s groups, which say the laws have finally given them access to their children after separation – The Australian

Legal challenge brewing over Holy Communion row – The Sydney Anglican Archbishop, Peter Jensen, is facing a legal challenge over his church’s decision to break with the national church and permit apprentice ministers to give Holy Communion. The highest court of the Australian Anglican Church, the Appellate Tribunal, has been convened to decide on the contentious issue of whether church law allows deacons or church workers to preside over the Lord’s Supper, a duty exclusively performed by ordained priests and bishops – Sydney Morning Herald

In the wash-up, doctors forget about hygiene – Doctors are by far the worst health workers when it comes to washing their hands, with fewer than half managing to do so despite knowing its importance in reducing infection rates, a survey of public hospitals has found – Sydney Morning Herald

Drunks illegally served booze – Police have uncovered only a handful of cases of drunk people being served alcohol – in an entire decade – despite the state’s booze-fuelled havoc. Anti-binge drinking advocates have lashed out at police for nor not bothering to properly enforce the law – Melbourne Herald Sun

Campaigners take shot at booze-inspired toys – Booze-inspired toys encouraging binge drinking have been slammed by alcohol safety campaigners ahead of schoolies week. The popularity during the party season of gadgets such as beer bongs and guns that shoot liquor has sparked calls for a national review into where alcohol-related paraphernalia is sold – Melbourne Herald Sun

When love is found in a pill – The pusher: Ecstasy dealer Elijah is not worried about what happens to hiscustomers. An enthusiastic salesman, he sings his products’ praises – Adelaide Advertiser

Experimentation leads to permanent effects – The user: Justin seems like an ordinary 20-year-old.He went to a respectable school, holds down a good job and has plenty of friends. But he also is a recreational drug user and says years of messing with drugs have taken their toll on him – Adelaide Advertiser

The venues: Want a fix? You don’t have to look far – Nightspots and festivals are hotspots for illegal drug use – Adelaide Advertiser

Drugs, drunks on a night of dirty deals – Ben Harvy takes Adelaide Advertiser readers on a night out in the drug scene.

Clean up your act – Victorian sporting clubs will be forced to control rogue players and spectators or risk losing millions of dollars in funding. The State Government will this week tell clubs and associations of the tough new plan amid escalating concern at violence and abuse in community sport – Melbourne Herald Sun

Skate expectations as city boarders look for a new place to roll – Tonight a City of Sydney committee will consider a proposal for a purpose-built facility at the Western Distributor underpass near Wynyard, a plan that has lifted the hopes of skaters such as Alon Settinger, 20 – Sydney Morning Herald