Curbing the drinking habits of a nation on the Sunday agenda 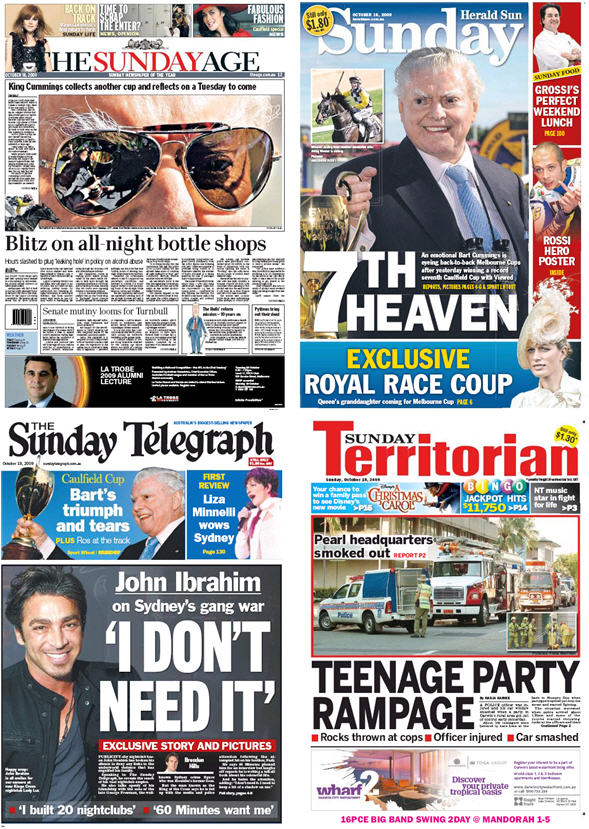 Secrecy fostered by public service – A culture of public service secrecy is alive and well, with as many as eight out of 10 ”confidential” Federal Government contracts being inappropriately shielded from public scrutiny – Melbourne Sunday Age

Libs want to make ‘friends’ with youth – The Liberal Party will start a recruitment drive to attract younger people who may be sympathetic to its policies but not keen to be full party members. People can become ”friends” of the NSW Liberal Party for $15 a year – Sydney Sun Herald

A1 shambles is the pits, Anna – Qneensland’s premier motor racing event may be dead after the embarrassing withdrawal of the A1GP from the Gold Coast’s Super GP yesterday – Brisbane Sunday Mail

Kosky’s pain relief on us – A Brumby Government minister’s $7.90 headache tablets are among thousands of petty and extravagant expense claims charged to the taxpayer by public servants and MPs working overseas – Melbourne Herald Sun

Liberals labour with great divide – Glenn Milne writes in the Sydney Sunday Telegraph that the real problem Malcolm Turnbull faces as he plumbs the opinion poll depths is that he’s the symptom, not the cause, of the Liberal Party’s current troubles.

Attention or asylum seekers – Kevin Rudd has decided to make a public show of being tough on asylum-seekers and this particular human cargo has, sadly, played into his hands. They are not huddled, disempowered, silent shadows, grateful for any crumb of consideration we throw _ they are bold and stroppy and a bit melodramatic. And some Australians just can’t cope when refugees don’t fit the cliche – Claire Harvey in the Sydney Sunday Telegraph

Where the mild things are – A navel-gazing Coalition is in dire need of leadership, policies and luck writes Josh Gordon in the Melbourne Sunday Age

Coming up trumps – Don’t believe the hype – James Packer is no loser and, as the sharemarket surges, will regain his place as Australia’s richest man – Melbourne Sunday Age

News Corp seeks retransmission fees – Rupert Murdoch opened a new front in his battle to obtain “fair compensation” for content produced by his media companies, by saying he would be seeking fees from American cable and satellite operators to carry his Fox television network – London Times

Kevin Rudd gets whack for smacking – Leading psychologists said the Prime Minister sent the wrong message to parents in an interview on Friday, when he said he had disciplined his children with a “whack across the knuckles” – Sydney Sunday Telegraph

Sydney’s great toll rort – Tolls on Sydney’s main motorways have far outstripped inflation in the past decade, with some having doubled since 1999. So-called “escalation formulas” built into the contract deeds of the toll roads, allowing for increases to be rounded up – to 20c or 50c increments – are behind excessive charges – Sydney Sunday Telegraph

Threats against judges double – Threats to judges have doubled in the past 12 months, forcing one of the biggest reviews of court security since the 1980s – Sydney Sunday Telegraph

Lawyers seek a leash on state watchdog – The coercive powers of the Victorian Ombudsman run the risk of eroding the rule of law in the state and should be reviewed by an independent judicial inquiry, according to Victorian lawyers – Melbourne Sunday Age

No script, no cold drug: radical plan for ice war – Cold and flu remedies that contain pseudoephedrine would become available only by prescription if authorities adopt a radical plan aimed at tackling Australia’s growing epidemic of the drug known as ice – Sydney Sun Herald

Supermarket bars alcohol deliveries – Woolworths has suspended all home deliveries of alcohol nationally after The Melbourne Sunday Age revealed how easy it was for under-age drinkers to obtain liquor using the retail giant’s courier service.

Rees urges public service: keep it simple, stupid – NSW public servants will be put under a plain-English microscope to make sure the documents they produce are clear and precise – Sydney Sun Herald

Plan for SA ‘super town’ – The masterplan for a multi-billion-dollar town of more than 18,000 homes and 46,000 people, earmarked for Adelaide’s north, has finally been released – Adelaide Sunday Mail

ALP backs late night trading – Labor has opened the door to Perth finally getting extra shopping hours. On Friday, WA Labor strongly indicated to The Sunday Times that the party would back some form of the Barnett Government’s latest push to establish tourism precincts in Joondalup, Midland and Armadale, allowing extended trading for those areas – Perth Sunday Times