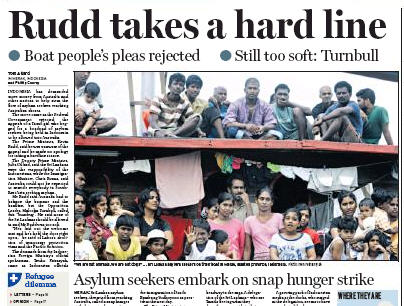 Hardline faction peddles fear and punitive policies for asylum seekers – Zhi Yan writes in the Sydney Morning Herald that fear tactics reminiscent of the Howard and Ruddock years are emerging in the debate on asylum seekers. A hardline faction within the shadow cabinet is pushing the line that Australia is being ”swamped” by asylum seekers as a result of the Government’s reforms to asylum policy.

Not sorry: PM unmoved by pleas – Prime Minister Kevin Rudd has brushed off emotional appeals from Tamils aboard the boat he had the Indonesians intercept, and whose fate is at the centre of a political row over asylum seekers – Melbourne Age

AFP rushed to asylum seeker frontline – Australia will send police and hi-tech gear into several Asian hot-spots in a frantic bid to stem the flow of asylum seekers. Taxpayers are also likely to stump up millions of dollars in extra assistance for border protection as the Rudd Government tries to deal with the growing political storm – Sydney Daily Telegraph

We’re slow to aid the world’s hungry: study – Just 10 days after the United Nations declared Australia to have the second-best quality of life in the world, a less flattering study has found it slow to share its wealth with a world in which more than a billion people go hungry. The international group ActionAid will release a scorecard today on which Australia is ranked 17th out of the world’s 22 most developed countries in terms of their aid – Sydney Morning Herald

Aussie dollar heads for parity – The Australian dollar appears headed towards parity with the US dollar after Reserve Bank governor Glenn Stevens agreed the economy’s strength could drive it “way up” to $US1.10 – The Australian

Root-and-branch review, but no big tax changes likely – Ken Henry’s tax review is unlikely to recommend drastic reforms to the tax system, amid concerns any major change would not be worth the cost – Sydney Morning Herald

Call for tax to ease road congestion – The Henry review of Australia’s tax system is likely to propose a radical reform of road taxes to shift from taxing petrol and car registration to charging for access to congested roads, Treasury secretary Ken Henry has revealed – Melbourne Age

Driving in peak hour or on busy roads to cost more – Queensland motorists will be forced to pay to drive on congested roads under a controversial proposal by Australia’s Treasury boss, Ken Henry – Brisbane Courier Mail

Rann assault not affecting vote – Almost nine in 10 voters say the circumstances surrounding the recent assault on Premier Mike Rann will not cause them to change their vote. An Advertiser poll also shows Labor’s primary vote has risen since the attack, along with Mr Rann’s personal approval rating which – in a major blow for the Liberals – is now higher in the country than in the city – Adelaide Advertiser

Labor may end union funding – Labor is willing to sever its financial ties with the union movement as part of its push for substantial reform of campaign finances, including the abolition of corporate donations – Sydney Morning Herald

Diagnosis positive for public hospitals, report shows – Public hospitals are faring relatively well in terms of costs and patient pressures, a Productivity Commission report has found, in contrast to the ”bleak” assessment given by the Prime Minister, Kevin Rudd, this week – Sydney Morning Herald

State funding inadequate, say hospitals – Victoria’s first ”billion-dollar health service” has blamed inadequate State Government funding for its slipping further into the red. Other hospitals are said to be angry the Government has not fully funded the wages deals it signed with doctors and nurses, leaving them to pick up the tab – Melbourne Age

NT Govt slashes bookies’ taxes – The NT is slashing taxes for online bookmakers in a bid to hold off poachers from down south. Tasmania is trying to become a world hub for internet gambling by capping state taxes for bookies at $250,000 a year. The State Government hopes to lure some of the NT-based companies to Hobart. But the Northern Territory News learnt yesterday that the NT Government will match the Tasmanian offer at a cost of several million dollars – Northern Territory News

The Tamils are fleeing because no one will ease their plight – Bruce Haigh writes in the Sydney Morning Herald that political point-scoring is obscuring the facts on asylum seekers.

Refugee lobby’s 10 commandments – Paul Sheehan in the Sydney Morning Herald points out how the tough border security rhetoric of the Rudd Government has been exposed as mere macho grandstanding. Suddenly the PM is talking about ”illegal immigrants” and standing up to evil people smugglers. It’s spin.

A simple Twitter brings down the mighty cone of silence – Richard Ackland in the Sydney Morning Herald tells how Twitter messages beat a judicially imposed cone of silence on a court cazse involving a major polluter.

An ugly, divisive debate – Michelle Grattan in the Melbourne Age sees the the tone as getting nasty and this is alarming. The Government, worried about its inability to control the water-borne influx and also about the politics, has launched into both frantic activity and hyped rhetoric. The embattled Opposition is seizing on an emotive issue that played for it politically in the past – before causing it trouble. But that could be a dangerous tactic: this is something that divides Liberal ranks.

It’s Rudd’s new Tampa – Andrew Bolt in the Melbourne Herald Sun calls it Kevin Rudd’s Tampa – a boat of illegal immigrants turned back at gunpoint and sent to a foreign island. Hey, where’s the media outrage now? Or is that reserved just for prime ministers called John Howard? If this didn’t involve the lives of 255 Sri Lankans, now bobbing off Java and refusing to leave their boat, you’d laugh – Melbourne Herald Sun

Squandering the crisis – Henry Ergas in The Australian believes that on any objective assessment, the advanced economies’ long-term growth potential has gone backwards over the past two years.

Verve bosses get big pay rises despite loss – The managing director of WA’s power generator Verve Energy was given a $94,000 pay rise last financial year despite overseeing a loss at the State-owned utility of $171 million and rocketing prices for households – The West Australian

BHP, Rio ditch joint iron ore marketing plan – BHP Billiton and Rio Tinto have been forced into the first major backdown on the hastily arranged $US116 billion ($126m) merger of their Pilbara iron ore interests, scrapping the proposed joint marketing of up to 15 per cent of production – The Australian

Threat to turn off tap on water grants – The Rudd government is threatening to rethink $3.7 billion in water grants to laggard states because of unacceptable delays in state governments spending the money – The Australian

Brumby warned of power shortage – Victoria could face widespread power disruptions due to the closure of two of its four brown coal power stations in the next decade as Australia reduces its greenhouse gas emissions, according to high-level advice before the State Government – Melbourne Age

Chips are down as parents get healthy diet message – The contribution of ”extra” foods like chips, sweets and fizzy drinks to Australian children’s diets has fallen over the past decade, according to Sydney University analysis that suggests the healthy eating message may be getting through to parents – Sydney Morning Herald

Yes, it’s OK to give the kids a smack, parents say – overwhelmingly – A massive 92 per cent of heraldsun.com.au readers yesterday said parents should be allowed to smack their misbehaving children. Many said the hands-off approach was creating a generation who showed no respect for authority – Melbourne Herald Sun

ICAC work is not my role, says Pallaras – SA Director of Public Prosecutions Stephen Pallaras, QC, has defended his call for an independent crime commission, saying neither his office nor the police can adequately investigate corruption issues – Adelaide Advertiser

New cops led astray by rotten rebels – A cabal of experienced Victoria police see themselves as “guardians” of a counter-culture that promotes self-interest ahead of ethical service and encourages rule-breaking among younger officers as a necessary part of the job. Victoria’s police watchdog, the Office of Police Integrity, yesterday handed down its annual report, exposing the practice of some officers “green-lighting” unethical conduct – The Australian

That’s another fine mess to backflip on – Archaic laws banning fortune tellers, fighting for money or letting loose a horse in public are likely to be scrapped in the Northern Territory under a complete overhaul of dated legislation – Northern Territory News

Golliwogs out of work after store banishment – They were popular toys for generations of children but now golliwogs have become casualties of the Hey, Hey It’s Saturday blackface controversy – banished to the back of some shops to keep them out of the public eye – Sydney Daily Telegraph

Labor, Nationals tagged as hypocrites over shop hours – Nationals and Labor MPs have been accused of rank hypocrisy over their deregulated trading stance after it emerged that most of the country areas granted exemptions to the State’s retail trading rules sit squarely in their electorates – The West Australian

yes ..mr o7 is taking a hard stand, i wonder if he remembers labor policy on the tampa that sat out in the ocean with 200 on board .

As I was saying yesterday, after appointing War for Oil Nelson, Kevin ‘science’ Rudd is exposed as a news grab in search of a conviction. Too clever by half.

Be assured only about 5-10% of Australians are bigoted or might change their vote on refugee policy, but that is also the margin that federal elections are won and lost by. So we get this tiresome illogical tub thump about 1000-10,000 asylum seekers under a treaty we signed while maintaining a 300,000 plus per year economic immigration programme.

If the Govt, any Govt, really believed their bullsh*t on so called “illegal” or “unlawful entrants” (in fact refugees under treaty) they would repudiate the treaties. But then how could Global Man of the Moment stride into Copenhagen having trashed equity principles so central to climate talks?

He couldn’t. Science as I call him ironically, is weak. The elixir of popularity and power is a powerful one – been there done that – and he is hooked big time. It’s the beginning of the end for Science because without rock solid principles there is no way to maintain inner faith and self confidence. And from that can only follow failure. The bigger they are …

And where did I get his new nickname “Science” from? It was when early in his term he said he would decide on old growth forest protection in Tasmania ‘according to the science’. But only until the science departed from ALP Right unionist policy. Onya Kev, a true academic jellyback.

“Be assured only about 5-10% of Australians are bigoted or might change their vote on refugee policy, but that is also the margin that federal elections are won and lost by”
– Couldn’t agree with you more TOM MCLOUGHLIN, but if there was real leadership from Turnbull and Rudd they (the bigots) would have nowhere to go unless Hanson did a Lazarus, and even then it would go to preferences.