I noticed this morning that Paul Krugman in his blog The Conscience of a Liberal quoted a colleague Stan Collender as writing that people read deep meaning into statements by Ben Bernanke that are, in fact, almost content-free, and compares the estimable chairman of the US Federal Reserve to Chauncey Gardiner in Being There. “But the resemblance” wrote Krugman, “is much, much closer than Stan seems to realize” and he posted a link which led me to the Wall Street Journal and a piece back in April by Justin Lahart: Fed Chairman Chauncey Gardiner: You Must Believe In Spring. In it Lahart drew attention to how the combination of signs that the economy may have begun to recover and the arrival of spring had led to the overuse of a metaphor that could use a little pruning.  “We’re talking,” he wrote, “about those ‘green shoots’ (sometimes ‘shoots of green’) that keep showing up in policymakers’ speeches, economists’ notes and, unfortunately, reporters’ stories.”

Now because it’s old news and not protected by the Journal’s subscribers only arrangements I am risking the great man’s wrath and unashamedly plagiarising. But first refresh yourself about Chauncey with this trailer of the movie and then read the dialogue from the 1979 film Being There, based on the Jerzy Kosinski book of the same name, which “should serve as a reminder to everyone involved that it’s all been said before, and so much better.”

BENJAMIN RAND: …There is no longer any margin for inflation, it has gone as far as it can. You’ve reached your limits on taxation, dependence on foreign energy is at a point of crisis, and, from where I see it, Mr. President, the so-called Free Enterprise System could be at the breaking point.

PRESIDENT: You don’t think I should take that chance, huh?

PRESIDENT: Do you agree with Ben, Mr. Gardiner? Or do you think we can stimulate growth through temporary incentives?

CHANCE: As long as the roots are not severed, all is well and all will be well in the garden.

PRESIDENT: …In the garden?

RAND: I think what my most insightful friend is building up to, Mr. President, is that we welcome the inevitable seasons of nature, yet we are upset by the seasons of our economy.

CHANCE: Yes. That is correct. There will be growth in the spring.

State defies gloomy May budget forecasts – Victoria has ducked the worst of the global financial crisis, with the state budget surplus growing again and unemployment no longer expected to rise as high as feared. New state Treasury figures show the budget surplus for last financial year was $251 million, up from the $163 million forecast in the May budget but still well down on the $828 million predicted before the global financial crisis – Melbourne Age

Crisis over as Treasury revises its doomsday forecasts – The Australian 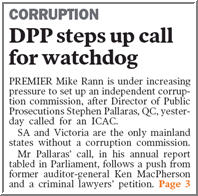 South Australia needs an ICAC says Director of Public Prosecutions – The issue was reignited yesterday when Director of Public Prosecutions Stephen Pallaras, QC, once again called for the introduction of an Independent Commission Against Corruption. His latest comments will ensure the Opposition makes an ICAC an important policy difference during the state election campaign – Adelaide Advertiser

Bias blocks barristers from taking silk, critic charges – A Sydney barrister has risked ostracism and the ire of the legal hierarchy with his unprecedented public criticism of the system of appointing silks in NSW – Sydney Morning Herald

The spoon squad strikes over child discipline – A mum was warned by police she could be charged with assault with a weapon for disciplining her nine-year-old daughter with a wooden spoon. The mother was dobbed in by a school support worker after her daughter revealed during a classroom discussion on bullying that she had been smacked – Sydney Daily Telegraph

Remove the glass ceiling or have it smashed – Australian companies should be given five years to increase the number of women sitting on their boards before government legislation forces them to do it. Federal Sex Discrimination Commissioner Elizabeth Broderick has outlined her vision to steer corporate Australia toward “the road to gender equality” – Sydney Daily Telegraph

Anna Bligh bombs out on MasterChef – The Liberal National Party gatecrashed Anna Bligh’s televised dinner party as the Premier lost the battle of the kitchen in Celebrity MasterChef. As Ms Bligh’s cooking prowess with Queensland produce fell short on the top-rating Channel 10 show, viewers were hit with LNP-funded commercials questioning the Premier’s honesty over her Government’s asset sales and reasons for appearing on the show – Brisbane Courier Mail

Premier branded a hypocrite – Mike Rann has been accused of being a “political hypocrite” over his comments relating to the alleged assault on him at the National Wine Centre. Liberal frontbencher Rob Lucas was heckled in the Upper House by Labor MPs yesterday when he raised issues surrounding the incident – the first time the Opposition has mentioned it in Parliament – Adelaide Advertiser

Money cures nothing as care for patients suffers – Public hospital performance has reached the lowest point on record and the funding system is so ”dysfunctional” that cash boosts from the Rudd Government have failed to improve patient care, doctors say – Sydney Morning Herald

NT hospital waiting times ‘among the worst’ – Public hospitals in the Territory are not operating at a safe level, with patients waiting longer for elective surgery and in emergency than in most other parts of the country, according to a new report – Northern Territory News

Parking inspectors set for good guy makeover – One of Sydney’s biggest councils has pledged an end to the days of stony-faced inspectors in leather jackets, cargo pants and boots. Parramatta Council will rename staff “community safety officers” and dress them in tailored pants and business shirts. The changes will be matched by new operating procedures, giving council officers more discretion when issuing tickets – Sydney Daily Telegraph

Corporate NSW puts money on O’Farrell – Donations to the NSW Opposition have surged ahead of those given to state Labor, with big business bankrolling the Coalition to the tune of more than $17.5 million in the past two years, compared to Labor’s $13.9 million – Sydney Morning Herald

Labor back but Ripper still adrift – WA Labor has moved to within striking distance of the Barnett Government over the last two months, but Opposition Leader Eric Ripper remains a long way behind Colin Barnett as preferred premier, the latest Westpoll has revealed – The West Australian

Pain on the home front – Alan Wood in The Australian looks at the question of what the Reserve Bank of Australia’s decision to start moving official interest rates up towards a neutral level will do to house prices? 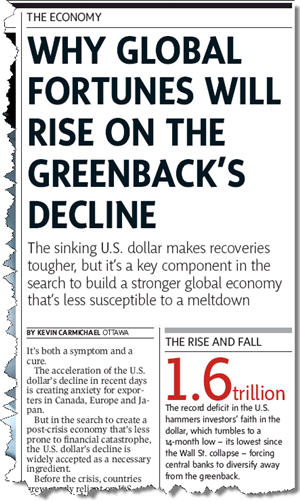 Why the U.S. dollar’s decline means a rise in global fortunes – In the search for post-crisis economic stability, a weaker greenback is widely thought to be a key component – Toronto Globe & Mail

U.S. Economy: Retail Sales in September Drop Less Than Forecast – Sales at U.S. retailers fell less than forecast in September after the Obama administration’s cash-for-clunkers program expired, signaling consumers are gaining confidence in the outlook for an economic recovery – Bloomberg 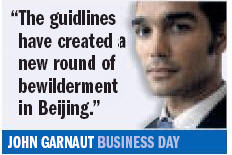 Rudd policy on China ‘set by BHP‘ – A former senior Treasury official has accused the Rudd Government of caving in to the wishes of BHP Billiton over Chinese investment in Australia, contributing to a serious deterioration in relations with Beijing. Stephen Joske says BHP bent the ears of senior ministers and exploited the Government’s ”policy dysfunction” to get its way on China – Melbourne Age

China renews appetite for Rio iron ore – Rio Tinto has killed off concerns that China’s demand for its iron ore would suffer following the stand-off on benchmark pricing in the Chinese market and the political tension caused by the July arrest in Shanghai of its chief iron ore price negotiator, Stern Hu – Sydney Morning Herald

Turnbull to get green light on climate – Malcolm Turnbull is set to win party room support on Sunday for negotiations with the Government on the emissions scheme, but it will be only the start of the toughest month of his difficult leadership – Melbourne Age

Fifty-five days and counting: oil still spewing from rig – One of the worst oil spills in Australia’s history has entered its 55th day after a second attempt to stem a leaking well in the Timor Sea failed, deepening concerns among environmental scientists that the impact on marine life will be felt for decades – Sydney Morning Herald

What our overflowing reservoirs mean for you – Water restrictions will remain in force in Adelaide, despite above-average rainfall and full catchments allowing 14 gigalitres of fresh water to be released into the Coorong – Adelaide Advertiser

How the mighty are fallen – The age of the media baron is past, and once powerful empires are unravelling says Mark Scott, managing director of the ABC in an edited version of the A. N. Smith Lecture in Journalism given last night at Melbourne University – Melbourne Age

Diagnosis to rock the world of mental health – Mental illnesses such as depression and schizophrenia could soon be diagnosed by plugging an electrode into a patient’s ear and rocking them around on a chair. Researchers at Monash University have come up with this new invention called ”electrovestibulography” – Melbourne Age