The pick of this morning's media with a bonus racing video

Stimulus may be cut, Swan hints – Treasurer Wayne Swan has flagged spending cuts ahead, declaring that the Government is ready to adjust its budgetary policy ”should circumstances warrant it” – Melbourne Age

Wayne Swan denies split with Reserve Bank – Wayne Swan has denied there is a split between Treasury and the increasingly optimistic Reserve Bank, claiming the two organisations had always engaged in “healthy debate” – The Australian

NSW the financially worst state of all – NSW is stumbling out of the global financial crisis slower than any other state or territory, embarrassed by little Tasmania which is setting the pace for economic recovery – Sydney Daily Telegraph

Rudd call stops refugee boat – Indonesia’s navy swooped on a boatload of 260 Australia-bound asylum seekers at the weekend after Prime Minister Kevin Rudd made an extraordinary personal plea to President Susilo Bambang Yudhoyono. It is believed Mr Rudd was given top-level intelligence on the whereabouts of the boat by Australian officials in Indonesia – Melbourne Age

Philip Ruddock predicts flood of 10,000 boatpeople – Kevin Rudd and the architect of the Howard government’s Pacific Solution, Philip Ruddock, yesterday clashed over whose administration was tougher on boatpeople, with Mr Ruddock claiming recent policy changes left Australia exposed to a “pipeline” of 10,000 unauthorised arrivals a year – The Australian

‘I did not mislead McGurk inquiry‘ – The head of the NSW planning department, Sam Haddad, will deny accusations today that he misled Parliament after he claimed his department’s submission to the McGurk inquiry was ”not redrafted”. Mr Haddad told the inquiry on September 29 that the department’s submission was ”essentially, fundamentally the same submission that was prepared by departmental officers to me”. But documents given to Parliament after a call for papers in the upper house show the submission was substantially changed after an early draft was emailed to Mr Haddad on September 24 – Sydney Morning Herald

1-in-3 would pay PM more – More than one in three Australians believe the Prime Minister is grossly underpaid, according to the Age/Nielsen poll. But more think the PM’s pay – around $340,000 annually – is about right – Melbourne Age

Homeless housing plan in doubt – The State Government appears to be scaling back its plan to provide permanent housing for chronically homeless people in Sydney, drawing accusations that the project is being set up to fail – Sydney Morning Herald

Anna Bligh the target of union asset-sale campaign – Key unions spent almost $450,000 of their members’ money on advertising campaigns backing Premier Anna Bligh before her March state election victory, according to new details released by the Electoral Commission of Queensland. But the significant advertising splurge seems unlikely to be repeated at the next election after unions vowed to campaign against the Government if it goes ahead with the asset sale – Brisbane Courier Mail

Given the climate, Turnbull’s the right man for the job – Gerard Henderson argues that in the short term the Liberals, under Turnbull’s leadership, have little alternative but to advance good policy. There is much that can be said about small business including farmers, rising youth unemployment and the likely increase in power generation costs under a carbon reduction scheme that should appeal to the Opposition’s core support base. That’s about all that can be done until, in time, the electoral cycle turns. As it invariably does – Sydney Morning Herald

The error of our ways – Tim Colebatch in the Melbourne Age ponders why it is that if you’re in public life, you can’t own up to failure. You’re not allowed to make mistakes. A minister can do 1000 good things while he’s in office, but the one thing everyone will remember is the time he was seen to goof up.

Credit crunch we had to have – Michael Stutchbury in The Australian suggests the bullish thoughts of former Reserve Bank of Australia governor Ian Macfarlane encourage the view that both the diagnosis of the global financial crisis and the policy implications drawn by Kevin Rudd and others are dangerously wrong, particularly for Australia.

Obama’s peace shattered as dollar takes a pounding – Peter Hartcher in the Sydney Morning Herald notes that as the Nobel Prize committee was voting one way on Barack Obama’s promise for the world’s future, the global marketplace was holding a very different vote on America’s future with the US dollar falling sharply against currencies around the world and the price of gold rising to an all-time high of $1040 an ounce .

Australians warm to nuclear power – An Age/Nielson poll found 49 per cent of Australians believed nuclear should be on the nation’s list of potential power options, while 43 per cent were opposed outright. The finding marks a big shift of public opinion from 2006, when a Newspoll showed just 38 per cent in favour of nuclear power and 51 per cent opposed – Melbourne Age 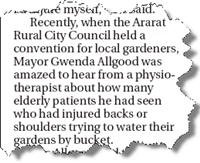 Buckets down in Ararat as tap water flows again – Ararat is among 38 towns in western Victoria that have had their severe water restrictions relaxed from level 4, which bans all outside watering, to level 1 – Melbourne Age

Cooling detected on global warming fears – The anxiety of Australians about climate change is falling substantially, even as the issue dominates political debate in Canberra according to a Lowy Institute poll – The Australian

Fairfax Media is ready to anoint Corbett as chairman – The Australian

Nine-year-old dragged teacher by hair, court told – A teacher was attacked at school by a nine-year-old pupil who kicked her, threw rocks in her face and dragged her by the hair to the staffroom floor – Sydney Morning Herald

Bad teachers need an ‘incentive’ to leave – Graeden Horsell, former Senior Secondary Assessment Board of South Australia board member and head of the state’s peak governing council body, has suggested poorly performing teachers near the end of their career should be offered packages of about $50,000 to lure them into early retirement – Adelaide Advertiser

Australia tops poll for student safety – Foreign students rate Australia as the safest study destination but rank it third for education system prestige, according to a global survey – Melbourne Age 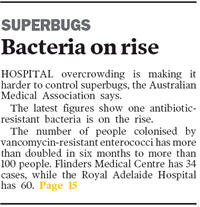 Dirty eateries escaping shame – Thanks to a loophole in the State Government’s name and shame list, the “worst of the worst” restaurants that are shut down immediately rarely make it to the Food Authority’s official list. The Sydney Daily Telegraph today lists those restaurants