But in both the Coalition is well behind in the polls. The pick of this morning's media

Hockey firms as voters’ choice – Joe Hockey’s claim as the next legitimate leader of the Liberal Party has been bolstered by a new poll showing the shadow treasurer is slightly favoured over Malcolm Turnbull and well ahead of the other main contender, Tony Abbott. On a two-party preferred basis, Labor leads the Coalition by 57 per cent to 43 per cent – Sydney Morning Herald

Joe Hockey’s support falters after Peter Costello withdraws – Turnbull’s besieged leadership has received a boost, with support for him as Liberal leader clearly outstripping his putative rival Joe Hockey. After a week of speculation about Mr Turnbull’s leadership – sparked by Mr Hockey’s public declaration that he had been approached by Liberal MPs to stand as leader – his support has beaten that of the popular Opposition Treasury spokesman for the first time – The Australian

Liberals sinking with a corpse at the helm – Peter Hartcher writes in the Sydney Morning Herald that the good news for Malcolm Turnbull in today’s poll is that his personal approval numbers have stabilised. The bad news is that they have stabilised at levels usually found in the politically dead.

Turnbull’s Joe blow: Hockey the front runner – A majority of Coalition voters say the Opposition should not finalise any emissions trading deal with the Government until after Copenhagen, in an Age/Nielsen poll that also shows Labor strengthening and Joe Hockey with his nose in front as preferred Liberal leader. The Coalition has slipped two points in the two-party vote – Melbourne Age 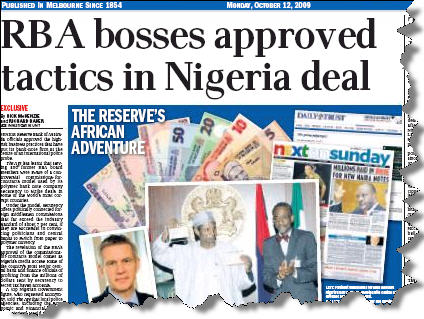 MPs’ allowances should be revealed: Integrity Commissioner – Queensland’s politicians have been warned to explain how they spend their massive secret allowances or risk facing a British-style MP expenses scandal – Brisbane Courier Mail 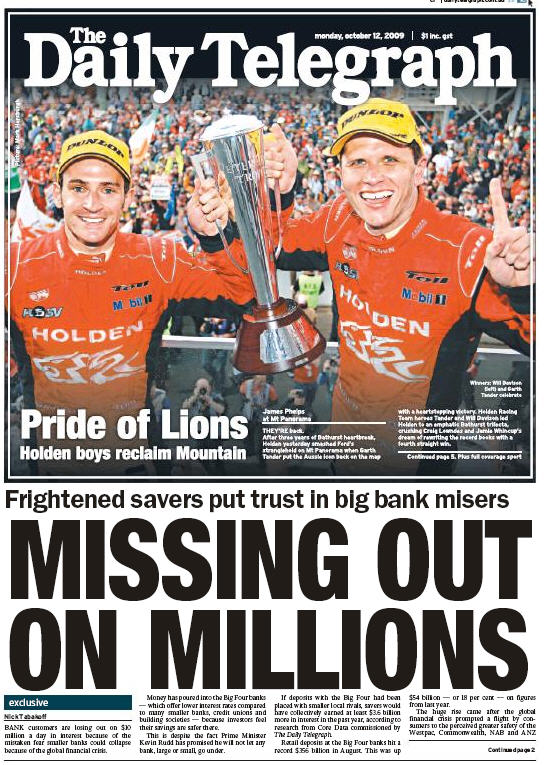 Wayne Swan doubles support for small home lenders – The government is doubling its financial support for competitors to the big four banks to $16billion amid concern that Australia faces the threat of a near-monopoly of the home loan market. Wayne Swan has directed the Treasury’s financing arm to buy up to $8bn in mortgage bonds – packages of mortgages that can be sold and traded on financial markets – from small home lenders to ensure they survive against their bigger competitors – The Australian

Swan lifts mortgage assistance – In a move to strengthen the competitiveness of smaller lenders, the Treasurer announced the Government would invest in residential mortgage-backed securities (RMBS), which are effectively mortgages packaged and resold – Melbourne Age

Spy van in thug hunt – Melbourne City Council will unveil its own hi-tech spy van in the battle to control booze-fuelled thugs on city streets. Ratepayers will shell out for the CCTV vehicle to roam the CBD and provide video evidence against violent offenders – Melbourne Herald Sun

Shire’s rate hike a bit rich: residents – A few residents are steamed up over a Territory shire’s decision to double its rates. Wagait Shire Council has recently hit residents with a rate increase of about 95 per cent. This means their bills went from $220 to $430 – Northern Territory News

Costello’s sharp tongue may never taste the milk of human kindness – Phillip Coorey in the Sydney Morning Herald writes how there there is a real antipathy towards Peter Costello from within Labor.

Mere words do not make a credible storyline, Mr Turnbull – Lindy Edwards in the Melbourne Age explains how politicians play to two audiences. There are the Parliament House insiders who hoot and cheer at a display of question time dominance replete with eviscerating invective, and then there is the public sitting in the visitors’ gallery, appalled. Turnbull is on the nose with both audiences, but his problems with the latter are the real threat to his aspirations.

Mandarin’s partiality – Glenn Milne reports in The Australian that at the most senior levels of the opposition there is now a belief that Henry, the head of the federal Treasury, has crossed the Rubicon; that he has become a partisan political player, instead of remaining an impartial bureaucrat.

Pay lavishly and risk being short-changed – Kenneth Davidson in the Melbourne Age writes how it is difficult to argue that the more moderate salaries in countries such as Japan, France and Germany have undermined their countries’ economic performance.

Two Wrongs Make Another Fiasco – George Rich writes in the New York Times that perhaps the most surreal aspect of our great Afghanistan debate is the Beltway credence given to the ravings of the unrepentant blunderers who dug us into this hole in the first place. Those who demanded that America divert its troops and treasure from Afghanistan to Iraq in 2002 and 2003 — when there was no Qaeda presence in Iraq — bear responsibility for the chaos in Afghanistan that ensued. Now they have the nerve to imperiously and tardily demand that America increase its 68,000-strong presence in Afghanistan to clean up their mess — even though the number of Qaeda insurgents there has dwindled to fewer than 100, according to the president’s national security adviser, Gen. James Jones.

Banking regulation can work – we are the proof – Ross Gittins in the Sydney Morning Herald writes that while the world looks on in admiration at our economy’s relative strength – the first country to need to raise interest rates – there’s a valuable lesson it can learn from our success: sensibly done, government regulation of the financial markets can work a treat.

Kerry Packer happy to let son James take One.Tel fall – Daniel Petre, who started NineMSN and ecorp, which allowed the Packers to profit from the internet boom, tells Four Corners he could not imagine a worse father-son relationship in Australian business than that between Kerry and James – Sydney Daily Telegraph

Wine glut vineyards abandoned – Wine companies are being forced to close their businesses and abandon vineyards as demand for their product dries up. South Australia’s wine industry has plunged into a deep crisis that threatens to claim hundreds of jobs – Adelaide Advertiser

Kevin Rudd to go easier on power industry – Energy Minister Martin Ferguson has signalled the Rudd government will consider further concessions to the electricity industry under an emissions trading scheme, amid fears some power generators could go broke – The Australian

Aussie shows wow the world’s kids – The annual television trade fair in Cannes, Mipcom, may have delivered Australian television a hot new series from Jerry Seinfeld, to be produced next year for Seven, but our local producers have given the world our own inventions for kids: Pearlie and Penelope K – The Australian

Sorrell lieutenant appointed to pull up Patts – Martin Sorrell, head of global advertising holding company WPP, has taken a direct interest in rebuilding its struggling agency George Patterson Y&R, appointing one of his most-trusted lieutenants as vice-chairman and chief strategy officer – The Australian

Tougher cannabis laws on way – Police will be given unprecedented powers to stop and search people for weapons and drugs in designated areas under a plan unveiled by Premier Colin Barnett at the annual State Liberal Party conference in Perth. Mr Barnett has used his address to the 60th annual conference to emphasise the Government’s tough law and order policy, which he recognised was a focus of last year’s State election – The West Australian

Obama renews pledge to gays to end ‘don’t ask, don’t tell’ – He says he will work for ‘full equality’ but does not give a timetable for his initiatives, which include changing the military policy and a federal ban on gay marriage – Los Angeles Times

Minister warns of tanking threat to gambling – Proof that AFL teams were ”tanking” – deliberately setting out to lose – could have dramatic consequences, the minister responsible for maintaining the integrity of gambling on sport in Victoria has warned. Making his first public comments on the investigation into the controversial issue of AFL teams tanking, Gaming Minister Tony Robinson said the image of sport in Victoria had to be safeguarded at all costs and he planned to discuss the tanking issue with other ministers – Melbourne Age