Campaign launched to lower drink-drive limit from .05 to .02 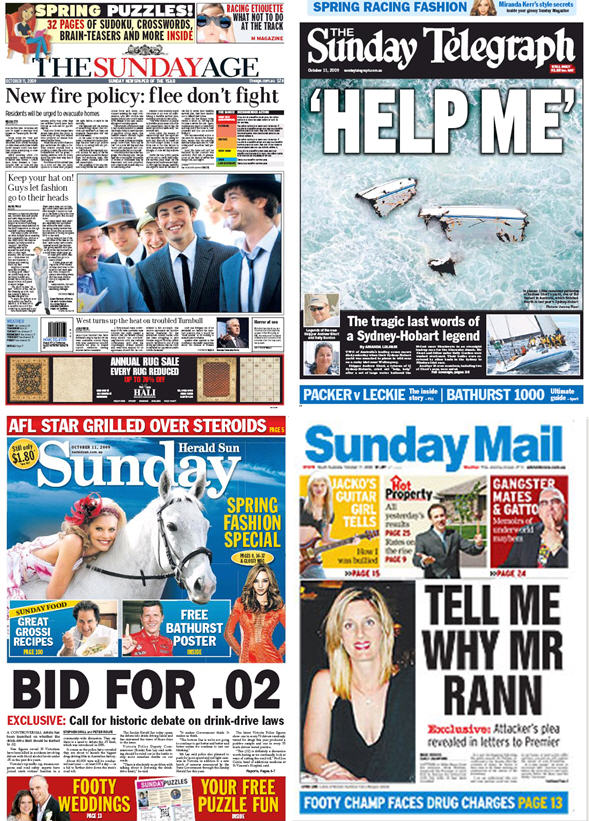 Government considers tracing welfare money – People who receive family assistance payments or welfare could have their purchases tracked via barcodes as part of a new income-management system being explored by the Federal Government. Spending would be controlled by making welfare and other payments available through Eftpos-style cards that could allow recipients to buy only products such as food, clothing and household goods – Sydney Sun Herald

How the West was not won on climate – Malcolm Turnbull has been delivered a slap in the face by the West Australian Liberal Party, with near unanimous hostility towards his plan to amend Labor’s emissions trading scheme before the Copenhagen summit – Melbourne Sunday Age

Emissions deal with ALP unlikely: Turnbull – Opposition Leader Malcolm Turnbull has admitted the Federal Government is unlikely to accept his amendments on the emissions trading scheme and urged his party to adopt a position it could defend at an election – Sydney Sun Herald

Belinda Neal’s career saved by ‘the Dell’ – The infidelity that cost Labor’s John Della Bosca his health portfolio has saved the political career of his wife, Belinda Neal. Short of intervention by Prime Minister Kevin Rudd, Ms Neal will be preselected for the seat of Robertson early next year – Sydney Sunday Telegraph

Samoa disaster tests surfing doctor’s skills – Staff thought Don Hannam was nuts when, wearing board shorts and thongs, and with zinc cream on his nose, he walked into Samoa’s Apia Hospital the day of the tsunami. But, after nine hours, they could not have been more grateful for the assistance of the Manly Hospital emergency doctor who helped save countless people in the under-resourced medical facility – Sydney Sun Herald

Bulldogs plan tackles affordable housing – The Melbourne Sunday Age reveals AFL club the Bulldogs are asking for $90 million of federal Nation Building funds to develop 251 affordable and social housing units at the Geelong Road end of the club’s home ground. But the proposal provoked an angry rebuke from the Maribyrnong City Council.

Bligh says state is safe for students – Queensland Premier Anna Bligh has become the latest politician to try to ease concerns over attacks on Indian students in Australia. Ms Bligh, in India for a trade mission, said Queensland had an ”excellent track record” in providing international students with a safe environment – Sydney Sun Herald

Black Saturday’s survivors deserve much better – Fran Bailey, the retiring federal member for McEwen, in the Melbourne Sunday Age argues that the authority in charge of bushfire recovery is more of a hindrance than a help.

Abbott appears the Right choice – Glenn Milne in the Sydney Sunday Telegraph tells how the hard heads in the Right convinced their colleagues to stop countenancing Joe Hockey as the only alternative leader and to start promoting one of their own, Tony Abbott.

Obama’s Nobel Peace Prize A Mixed Blessing At Home – President Obama’s stunning Nobel Peace Prize win may help solidify his international reputation and cement the prize committee’s clear desire to repudiate former President George W. Bush. Back home, however, where the president is grappling with near-record unemployment, an epic health care struggle and wars on two fronts, the honor was, at best, a mixed blessing. Even those who generally support Obama say it carries more than a dollop of political peril – National Public Radio

Death in suburbs – big business – A funeral director argues that the absence of government regulation of privately run mortuaries had created an uneven playing field, where some funeral directors were paying $30,000 or more for purpose-built facilities while other business owners were able to store corpses in refrigerated sheds – Brisbane Sunday Mail

Water crisis as bad as a war: ALP – Melburnians believed their 13-year water crisis – with its withering parks and gardens, dying trees, and the end of carefree water use – was as severe as facing a war or major natural disaster. This was the State Government’s view, recently revealed in documents released under freedom of information, as it prepared to unveil its 2007 major water plan – Melbourne Sunday Age

How pollution might just save the planet – If the climate’s broken, planetary engineering could perhaps help us fix it, writes Graham Phillips of the ABC’s Catalyst program in the Melbourne Sunday Age.

Want to know who built the nanny state? Check the mirror – Guy Rundle in the Sunday Melbourne Age explains how governments are micro-managing us because we want them to. The urge to control is coming from society, not government.

Harry quits gig after web attacks – Harry Connick Jnr cancelled a Sydney shopping centre appearance yesterday because of concerns for his safety. His management pulled the plug because of abusive comments posted online about Connick jnr after his stance against ”blackface” performers on Hey Hey It’s Saturday – Sydney Sun Herald

My brush with an angry Packer – Ros Reines in the Sydney Sunday Telegraph recounts being on the receiving end of James Packer’s fury back in 2001.

Hey Hey dancers hire PR consultant – The six Sydney doctors, who painted their faces black and donned Afro wigs in the “Jackson Jive” skit have gone into hiding since the show was slammed as racist by guest judge Harry Connick Jr, who was openly offended by the antics watched by a TV audience of 2.3 million. One of them has hired crisis PR manager Matthew Horan on a pro-bono basis to protect them from the global backlash, which included criticism from Michael Jackson’s family – Sydney Sunday Telegraph

House prices hotting up – The price of your home is rising, and it’s going to keep rising – by at least 5 per cent a year – for the next five years. That’s a forecast from ANZ Bank economist Paul Braddick, who this time 12 months ago did the bravest thing an economist can do: he broke with the pack – Melbourne Sunday Age

Exposed: Grog online too easy for under-age teen – After suggestions that minors were ordering alcohol online, The Sunday Age decided to investigate. Using a reporter’s credit card, the paper paid for the beer online at Woolworths’ Home Shop and coles.com.au and arranged for it to be delivered – Melbourne Sunday Age

Call for debate on drink-drive laws – A controversial debate has been launched by the Melbourne Sunday Herald Sun on whether the drink-drive limit should be slashed to .02.

Catholic, a chemist but he won’t sell the pill – Trevor Dal Broi is telling women using oral contraceptive pills for birth control to take their scripts to another chemist. He removed condoms from his East Griffith Pharmacy several weeks ago and has banned the sale of emergency contraception morning-after pills – Sydney Sun Herald