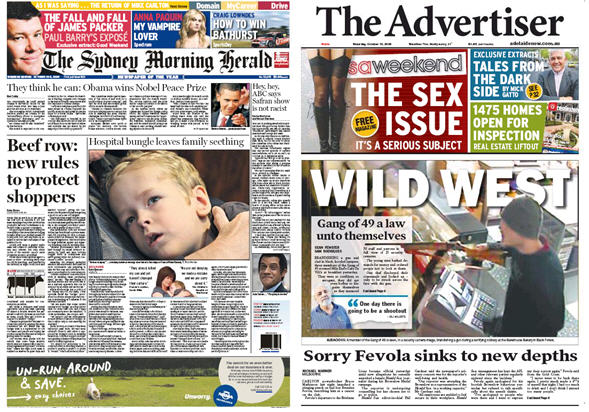 Malcolm Turnbull mates turned to Peter Costello to take over – Confidants of Malcolm Turnbull, convinced his leadership of the opposition was terminal and he was leaving politics, sounded out Peter Costello about taking over the Liberal leadership only four weeks ago. Approaches to Mr Costello were on the basis Mr Turnbull was resigning, amid confusion and conflicting views about his future. About two weeks ago, just as Joe Hockey made his decision to stand as Liberal leader if Mr Turnbull’s leadership failed, Mr Costello was told Mr Turnbull had “changed his mind” and was staying on – The Australian

Keep the motor running – Dylan Welch in the Sydney Morning Herald takes an insider’s look at the battle waged by bikies against a government crackdown.

Stimulus bill to drive up taxes, warns Ken Henry – Treasury boss Ken Henry has warned Australians they could face higher taxes and spending cuts in future budgets as the Government pays off the hefty bill for its economic stimulus spending. Dr Henry told a Senate inquiry yesterday the debt level was “manageable” but would take “a considerable number of years” to be wiped – Brisbane Courier Mail

Stimulus wind-back canvassed – Treasury chief Ken Henry has revealed that Treasury is working on possible ways to trim back the Federal Government’s fiscal stimulus — while warning that to scrap it entirely would cost 100,000 jobs – Melbourne Age

Beef row: new rules to protect shoppers – Fears that as much as 30 per cent of the beef sold in Australia is old cow meat repackaged as prime produce has prompted the NSW Government to introduce rules to protect consumers – Sydney Morning Herald

Judges for the boys

Howard tactics help Rudd corner Turnbull – The public sees an Opposition racked by internal brawling and a leader lurching from crisis to crisis. The accepted wisdom is that the Coalition has brought all this on itself. But credit where it is due. Turnbull and the Opposition would not have got into such a disastrous position without a great deal of help from Kevin Rudd. Rudd has played clever and ruthless politics. Wedge politics. And he learned how to do it from an expert – Laurie Oakes in the Sydney Daily Telegraph

No easy fix for Turnbull – writes Steve Lewis in the Adelaide Advertiser. Many of his colleagues perhaps a majority believe his leadership is terminal.

Malcolm in the muddle – The planets are lining up in ways that will cause the Opposition Leader much heartache in the months ahead, writes Phillip Coorey in the Sydney Morning Herald.

The banter will turn earnest after Hockey’s sunrise – Peter Hartcher in the Sydney Morning Herald writes that Joe Hockey has not been destabilising Turnbull. He has not been campaigning for his job. He has not been leaking to the media. He has, if fact, been supporting Turnbull. Because he doesn’t want the job. Not yet. Why would any sane person?

Costello: the exit of the enigma – Miranda Devine laments a retirement as ongoing disarray in the Opposition means Australia risks being saddled with all sorts of uncontested disasters, from rampant Commonwealth debt to bigger government and a jobs-wrecking emissions trading scheme – Sydney Morning Herald

Here we go again – Shaun Carney in the Melbourne Age writes that it was always going to be a dog of a time for the Liberals, having lost power after four terms in office, and that’s how it is turning out.

Libs in a flap as Turnbull wings it – Tony Wright in the Melbourne Age tells the tragic story of the mother duck in the parliamentary courtyard assaulted by marauding crows before turning his attention to Malcolm Turnbull.

Last resort: state’s 1000 bushfire safe havens – More than 1000 properties across NSW are expected to be earmarked and prepared as shelters of last resort in case of a bushfire – Sydney Morning Herald

MPs fired up over smut on TV – Ten WA Liberal MPs have called for less sex, bad language and drug use on free-to-air television. They want the language to be toned down, a higher standard applied to the depiction of sex on the box and a total ban on ads for sexual services – The West Australian

James Packer friends hit back at ‘vicious’ book – The Australian

Packer vs Leckie – Loyalty, betrayal and fury in public – Informed sources yesterday confirmed James Packer had called Leckie a “f . . . wit”. He was furious when David Leckie attempted a jovial greeting, telling him not to “pretend” he was his best mate when Seven’s Today Tonight had run stories which Packer saw as part of a “campaign” against him. Packer forcefully told Leckie of how he had always stuck up for him when his father had thought he was an idiot. Now, he said, his view had changed: “My father was right: you are a raging f. . .wit. Now f. . . off.” – Sydney Daily Telegraph

Murdoch urges China to open up to media – The Australian

The right time to die – The Melbourne Age

NSW obsessed with McMansion-type housing – While the rest of Australia opts for smaller, more efficient abodes, new homes being built in NSW are 22 per cent larger than the national average – Sydney Daily Telegraph

House sizes shrink to blocks – New homes in South Australia are shrinking and, on average, are the smallest in the nation – Adelaide Advertiser

Price spike puts a house beyond many – Fuyers will be able to afford the typical Sydney family home thanks to the recent price spurt, according to the head of the real estate researcher Residex, John Edwards – Sydney Morning Herald

Transit lane offenders targeted, penalties boosted – Queensland motorists who illegally use bus or transit lanes will be targeted under new laws which give transport officers the power to hand out hefty fines – Brisbane Courier Mail

Men’s club owner defends risque roadside billboard – A lap dancing club owner has been forced to defend her racy advertising billboard on Abbotsford Rd, Bowen Hills, which has landed her before the Advertising Standards Bureau. The advertisement features an attractive woman and the words “Tell your wife you’ll be late”. Four people have formally complained, arguing that the billboard undermines marriage and encourages infidelity – Brisbane Courier Mail

First boxing belles in 20 years – One has a degree in sport science and the other is at TAFE and hopes to study civil engineering. But that didn’t matter last night when they met in the boxing ring – the first women to do so in NSW – Sydney Daily Telegraph

Cygnet mum victim of Clover dog rule – Bird life has been devastated in a Sydney park where Lord Mayor Clover Moore has allowed dogs to roam without leashes, it was claimed yesterday – Sydney Daily Telegraph