Turnbull goes to Perth while football comes to Washington 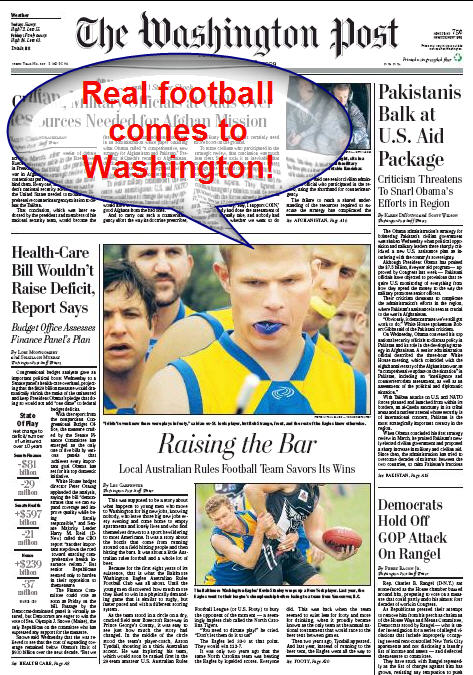 For the Love of Footy – Once Playing to Party, Team Now Rallies Around Wins – It was a story about the bonds that come from running around on a field hitting people and then hitting the bars. It was about a little Australian rules football and a whole lot of beer. Because for the first eight years of its existence, that is what the Baltimore Washington Eagles Australian Rules Football Club was all about. Until the young men discovered how much more they liked to win in a physically demanding game that is similar to rugby, but faster paced and with a different scoring system – Washington Post

Jobs picture shows sickest state on the mend – NSW, long derided as Australia’s sickest state, is staging an economic comeback with a revival in the finance and construction industries in the state delivering a big fall in the number of jobless. For the first time in five years, NSW has a lower unemployment rate than either of the two resource states, Western Australia and Queensland – The Australian

Garnaut warns PM on stimulus – The doyen of Labor economics advisers, Ross Garnaut, has warned that Kevin Rudd’s attacks on neo-liberalism risk an expansion of government that could damage the economy and even erode Australia’s democratic values. And he warns that, by further fuelling excess spending, the Rudd government’s budget stimulus will have to be followed by “hard times” and lower living standards that the government has “barely begun to contemplate” – The Australian

Battle looming on human rights as committee backs new act, role for courts – Battle lines were drawn yesterday for a fierce political debate after the government’s hand-picked committee said Australia should adopt a charter of human rights and give the High Court power to declare laws incompatible – The Australian

Labor lobbyist emerges as $60m developer – The Labor figure revealed as a key lobbyist to the NSW Planning Department, former federal minister Gary Punch, is applying as a developer to a Government-appointed planning panel to build a $60 million project – Sydney Morning Herald

No one’s fooled by false levity – Michelle Grattan reaches the conclusion that when dissident Liberals have kicked the leader almost to death, he’s not going to be able to pick himself up and stage a credible election fight; especially when a substantial proportion of his troops dislike and distrust him – Melbourne Age

Brilliant but not made for politics – Christian Kerr in The Australian recalls Malcolm Turnbull was embarrassed back in August when Bob Hawke claimed the Liberal leader told him as his hopes for a republic slid beneath the waves on referendum night in 1999: “Bob, the only thing I can do now is join the Labor Party.” Turnbull, of course, never followed through. That could have added insult to the injury of the republic’s defeat. But it may have saved him from a looming catastrophe.

Besieged leader losing traction – Dennis Shanahan in The Australian says Malcolm Turnbull has spent the past 10 days under siege over his leadership and the Rudd government’s emissions trading scheme. Yesterday the Liberal leader tried to get back on to less treacherous ground and attacked Labor over economic management and the handling of the stimulus spending to combat the global financial crisis.

Indigenous intervention a costly flop – Alastair Nicholson writes in the Melbourne Age how the advent of the Rudd Government brought new hope to those who would advance the position of indigenous people. It indicated that it proposed to support the UN Declaration on the Rights of Indigenous Peoples. Unaccountably, however, progress seemed to slow thereafter. The intervention was not abandoned, although several of its aspects were alleviated. It has proven to be a costly failure in achieving the object of protecting indigenous children. The plight of indigenous adults and children remains serious, despite countless reports and other interventions.

Furore over minister’s sex with brothel boys – It was a bestseller, critically acclaimed and widely read. Now, four years after publication, the memoir by the French Culture Minister, Frederic Mitterrand, has sparked a national storm after a political opponent read extracts on national TV describing sex with boys in a Bangkok brothel – Sydney Morning Herald

Packer in dumps as family money mountain slipped – James Packer’s retreat from public life this year is a sign of the emotional impact of losing part of the wealth he inherited from his late father, Kerry, says a new book on one of Australia’s most powerful businessmen – Melbourne Age

Turnbull’s climate change – Michelle Grattan in the Melbourne Age writes that the prospects of Australia passing emissions trading legislation this year have dived, as Malcolm Turnbull prepares to yield to pressure from his Coalition critics to take a tougher line. 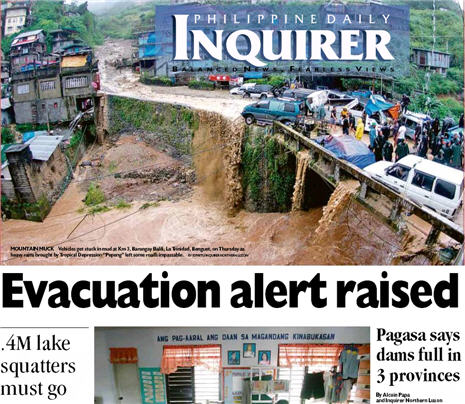 Sydney’s $1b rubbish bin – Sydney households throw out more than $600 million worth of fresh produce every year – and that does not include leftovers, which account for another $182 million in the bin, university research has found – Sydney Morning Herald 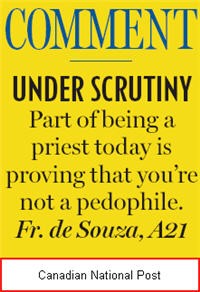 Anguish and absolution – Father Raymond J. de Souza writes in the Canadian National Post that while a reported accusation of child pornography in 1989 apparently did not get followed up, today, that would not happen. Today, parish volunteers — yes, including the pious church ladies of impeccable character — are subject to police background checks. I have had to demonstrate that I am not an abuser, criminal or miscreant in a half-dozen jurisdictions in the last few years. A routine part of being a priest today is demonstrating that you are not a pedophile; it’s not the state that asks that, it’s the Church.

Muslim group calls for burka ban in Canada – A Canadian Muslim group is calling on Ottawa to ban the wearing of the burka in public, saying the argument that the right to wear it is protected by the Charter’s guarantee of freedom of religion is false – Canadian National Post

Conrad Black: Why I became a Catholic – Canadian National Post

Watchdog cries fowl over bugs – Up to three-quarters of fresh chickens sold in Australia carry bugs that cause food poisoning. The nation’s food watchdog has confirmed the bacteria campylobacter is rampant in raw poultry– Melbourne Herald Sun

Public hospitals not failing, just starved of funds: Deeble – Public hospitals have performed ”extremely well” in recent years despite repeated claims of mismanagement and failure, the Medicare pioneer, John Deeble, has declared in an analysis that will confound doomsayers of the public system – Sydney Morning Herald