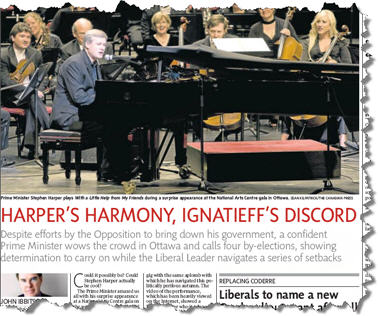 Harper’s harmony; Ignatieff’s discord – The Prime Minister amazed us all with his surprise appearance at a National Arts Centre gala on the weekend, where he sang and played the Beatles’ With a Little Help from My Friends. It was no small gamble to don smart but casual clothes, play the piano alongside renowned cellist Yo-Yo Ma, and try to sing in tune. But Mr. Harper handled the gig with the same aplomb with which he has navigated this politically perilous autumn. – Toronto Globe and Mail

Malcolm Turnbull’s economic, ETS woes slash voter support for Liberals – Liberal Party support has slumped back to the level it was at early in Brendan Nelson’s embattled leadership, as Malcolm Turnbull loses economic credibility with the public and fights his own back bench over an emissions trading scheme – The Australian

75pc say stimulus spending a winner – An overwhelming majority of voters — 75 per cent — believe the Rudd government’s economic stimulus package will make them better off or leave them no worse off in the coming year, despite concerns about the level of national debt – The Australian

Malcolm Turnbull risks revolt on West Australian front – Turnbull is facing a rebellion from the Liberal Party’s West Australian branch, which is demanding he drop his plan to negotiate with the Rudd government on an emissions trading scheme before the UN summit on climate change to be held in Copenhagen in December – The Australian

Liberals demand ‘respect’ from Turnbull – The shadow parliamentary secretary, Mitch Fifield, has added his name to the growing list of Liberals who disagree with their leader, Malcolm Turnbull, on emission trading policy. With shadow cabinet set to agree at a meeting tomorrow to a rough set of amendments to try to make to Labor’s scheme, the Victorian Liberal senator refused repeatedly to back his leader and stressed there should be no negotiation until early next year – Sydney Morning Herald

More trouble for Turnbull – Malcolm Turnbull’s leadership has been plunged into further crisis, with a key Liberal rebuffing him over emissions trading and a major row erupting over the fate of frontbencher Peter Dutton – Melbourne Age

Rumour mill puts pressure on Premier – The speculation speculation and innuendo surrounding the alleged assault on Premier Mike Rann could not have come at a worse time. This is an issue which seems almost certain to continue to dominate the state political arena until the Premier’s alleged assailant – Richard Phillips – appears in court in December – Adelaide Advertiser

No parachute ride into safe seat for Dutton: LNP – Queensland’s Liberal National Party has ruled out a deal to parachute Peter Dutton into a new federal seat to avoid a replay of Saturday’s preselection debacle, fanning federal Liberal fury at the frontbencher’s treatment – The Australian

Coalition ripping itself apart – Liberals and Nationals are at each other’s throats over the dumping of the federal frontbencher Peter Dutton, an act that has prompted discussion at high levels of the Liberal Party about a takeover of the Queensland branch – Sydney Morning Herald

Stimulus ‘to push up loan rate’ – Interest rates will be higher for the next four years, a Reserve Bank board member has predicted, because of the success of the Government’s $52 billion stimulus package – The West Australian

Reserve weighs up early rate rise – Australia is poised to lead the developed world in lifting interest rates, and home owners may be hit by higher borrowing costs from today – Sydney Morning Herald

Doing it even tougher – Victorian families face a sharp increase in household bills next year with grocery, water, electricity, food and gas bills set to soar by more than $1000. And poorest families will be hit hardest – Melbourne Herald Sun

Australia ranked No. 2 for quality of life – Australia has the second best quality of life in the world and could pip Norway for top spot next year, the author of a UN report on migration and development says – Sydney Morning Herald

Ad agency weapon in fight to deter illegal entrants – Taxpayers are funding a war against illegal immigration in Sri Lanka using street theatre, public banners and church notices to stem the flow of boat people. As the Rudd Government braces for more illegal arrivals, The Courier-Mail can reveal that global advertising agency Saatchi & Saatchi has been working on the radical campaign for the past five months – Brisbane Courier Mail

Sartor slams Keneally over lobbyist visits – The former planning minister Frank Sartor has broken Government ranks to condemn the fact that the Planning Department head Sam Haddad was able to be lobbied by the Labor identity Graham Richardson without his minister, Kristina Keneally, knowing or caring – Sydney Morning Herald

Body Armour puts Diggers in danger in Afghanistan – Australian soldiers fighting on foot in Afghanistan are being put at greater risk of enemy fire because they have to wear heavy, hot body armour that does not allow them to fire their weapons properly – Sydney Daily Telegraph

Marriage on the rocks – Peter van Onselen writes in The Australian that the Queensland merger of the Liberal Party and the Nationals into the Liberal National Party may be starting to cause the kind of problems its opponents said it would when the decision to proceed was ticked off last year.

Turnbull strategy out of control – Malcolm Turnbull’s bold endeavour – to simply tell the Liberals they couldn’t have him as leader without his ETS policy – was based on the belief that because there was no leadership alternative he would prevail. He may be right but his strategy may be careering out of control because now the Liberal Party is snapping back. The Nationals have been snapping for some time and it’s showing in the latest Newspoll surveys – Dennis Shanahan in The Australian

Save some prosperity – Michel Stutchbury in The Australian believes we need to think more about how to handle China boom 2.0 and beyond.

Aborigines deserve elected body – Gary Johns in The Australian writes that the Human Rights and Equal Opportunity Commission model for an indigenous congress is a chamber of peak associations and trusted insiders. It is not a directly elected chamber. The puzzle of the model and the government’s entertainment of it is, why the retreat from democracy?

End of the world is on its way, again – Peter Hartcher in the Sydney Morning Herald looks at the weather and concludes the rainfall related events – the dust storms and drought, the dry monsoon and the deluge – may well be symptoms of climate change, though it seems too early to be emphatic. But the earthquakes and tsunamis, and the Pacific typhoons, are part of older and immutable rhythms. Just like the human urge to speculate about the end of the world.

Rudd’s attitude to China gets the balance just about right – Gerard Henderson writes in the Sydney Morning Herald that in the wake of the global financial crisis, there is a tendency for some commentators in Australia to get the relationship between the two nations out of balance. Sure, China is important to Australia. But Australia is also important to China, especially as a reliable and efficient supplier of mineral resources. It is understandable that there is a degree of commercial tension involved. Australia is a free enterprise economy. For all its reforms, China remains an authoritarian regime where government controls business.

Obama’s Meeting With the Dalai Lama Is Delayed – In an attempt to gain favor with China, the United States pressured Tibetan representatives to postpone a meeting between the Dalai Lama and President Obama until after Obama’s summit with his Chinese counterpart, Hu Jintao, scheduled for next month, according to diplomats, government officials and other sources familiar with the talks. For the first time since 1991, the Tibetan spiritual leader will visit Washington this week and not meet with the president – Washington Post 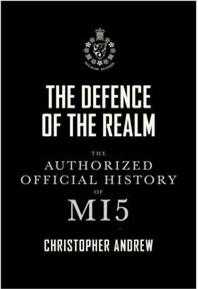 Spycatcher was mentally ill – Peter Wright, the British agent whose publication in Australia of Spycatcher was a victory for free speech, has been slammed in a new history of MI5 as a dangerous conspiracy theorist, whose work in the intelligence service was as damaging and distracting as that of some traitors. In the book, published by Penguin, the young Malcolm Turnbull who represented Peter Wright as a lawyer, is described as “able, aggressive.: – The Australian 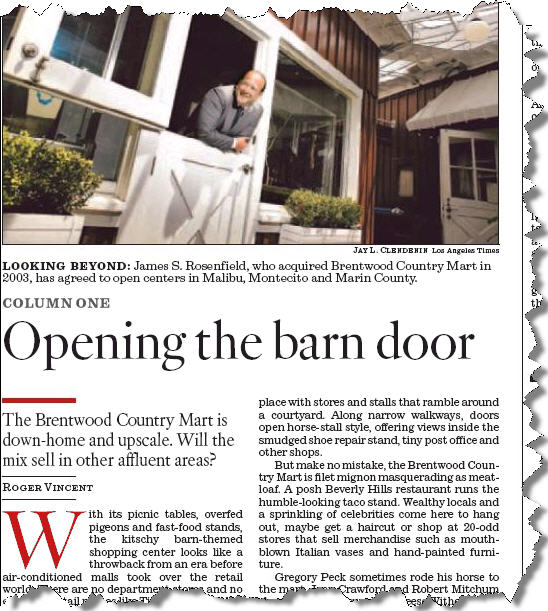 Can Brentwood Country Mart re-create its success? – The kitschy, barn-themed landmark has been around since 1948. Now landlord and developer James Rosenfield plans to take its down-home yet upscale sensibility to Malibu, Montecito and Marin County – Los Angeles Times

Store nuclear waste in Australia: Gareth Evans – Kevin Rudd’s troubleshooter on nuclear non-proliferation, Gareth Evans, says Australia could make a big contribution by entering the atomic energy fuel trade and taking back all waste derived from the uranium it sells – The Australian

Dust was blooming marvellous for harbour – Nutrient-rich topsoil from the city’s worst dust storm in about 70 years led to a tripling in the number of microscopic plants, or phytoplankton, in the upper layers of water, Sydney scientists have found. They also calculate this invisible explosion in photosynthetic life in the harbour and Tasman Sea would have soaked up an amount of carbon dioxide equivalent to a month’s emissions from the Munmorah Power Station on the Central Coast – Sydney Morning Herald

Victoria lags NSW in fire readiness – Victoria’s preparation for the coming fire season has been criticised for falling behind New South Wales’, with senior counsel for the Bushfires Royal Commission labelling Victoria’s strategy as ”lagging” in some aspects – Melbourne Age

Outspoken Australian scientist dropped by Bush wins Nobel – Australia’s 11th Nobel laureate, Professor Blackburn is a vocal advocate of independent scientific thought who fell out with the Bush administration over cloning and stem cells. She was dropped from George Bush’s Council on Bioethics in 2004 after questioning its bias – Sydney Morning Herald

Shooters back gun fun for families – The Shooters’ Party is pushing for the state’s gun laws to be overhauled to allow children of any age to fire air rifles on approved shooting ranges if they are under the supervision of an adult. A private members’ bill will be introduced in the next session of Parliament to change the laws to remove any age restrictions that currently only allow children over 12 to shoot air rifles, the Shooters’ MP Roy Smith said – Sydney Morning Herald

Little girls are the new sex objects – Preschoolers turning themselves into sexualised “mini-adults” by wearing bras, nail polish and lipstick are requiring psychological help in increasing numbers. Child development experts said young girls were now entering their “tween” years between being a child and a teenager at the tender age of six – five years earlier than previously – Sydney Daily Telegraph

Sex offenders skip jail rehab – More than half the sex offenders freed from WA prisons since the start of this year have failed to complete or participate in any rehabilitation programs, according to new figures – The West Australian

Well, if Malcolm is to sing a Beatles number, then the most appropriate one would be “Help!”

When I was younger, so much younger than today,
I never needed anybody’s help in any way.
But now these days are gone, I’m not so self assured,
Now I find I’ve changed my mind and opened up the doors.

Help me if you can, I’m feeling down
And I do appreciate you being round.
Help me, get my feet back on the ground,
Won’t you please, please help me?

And now my life has changed in oh so many ways,
My independence seems to vanish in the haze.
But every now and then I feel so insecure,
I know that I just need you like I’ve never done before.