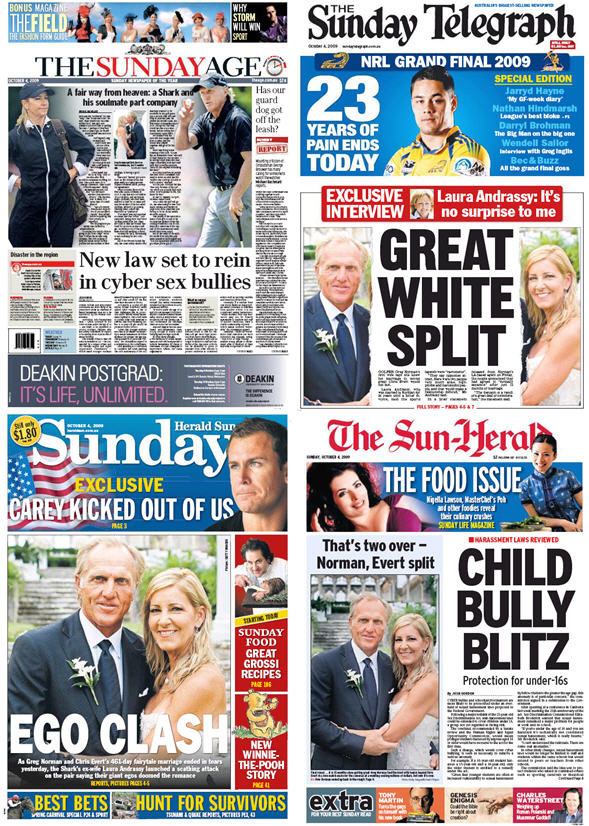 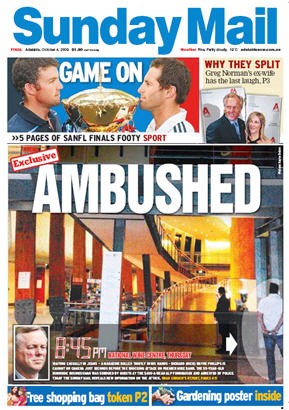 In Adelaide “new information” on the assaulting of the Premier dominated the front page with the story details not posted to the web by 6.30am.

Scuffling Young Libs face probe – The NSW Liberal Party will consider expelling several of its members following an out-of-control party meeting in the offices of a northwest Sydney federal MP last week. The NSW Liberal Party state executive voted on Friday night to investigate the altercation at the meeting. The incident is a sign of the deepening split within the Right following the falling out between Alex Hawke and Right factional leader David Clarke MLC – Sydney Sunday Telegraph 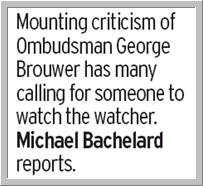 Has our watchdog slipped the leash? – When the State Government was cobbling together its anti-corruption framework in 2004, with the ombudsman and the Office of Police Integrity at its centre, critics were caustic. ”What we need in Victoria is a royal commission, but to head up that commission we need a caped crusader,” said then opposition leader Robert Doyle. ”The ombudsman’s more at home in a cardigan.” Fast forward to 2009 and nobody could complain that Ombudsman George Brouwer is some ineffectual bureaucrat. His recent reports have been robust to the point of aggression. The complaints are now that Brouwer’s powers are too great; that his investigators are using them too assertively; that his reports are too tough – Melbourne Sunday Age

Turnbull faces hostile climate – Glenn Milne in the Sydney Sunday Telegraph looks at the Malcolm Turnbull strategy and concludes that in the short term it will probably result in a Turnbull win as the alternative would be for the Liberal Party to roll its own leader.

When policies turn to clutter, what comes next? – Josh Gordon in the Melbourne Sunday Age goes searching to find what happened to the election promises of two years ago, is introduced to clutter and discovers that two years is . long time in politics.

Turnbull fights to escape toxic cloud of emissions – The Opposition Leader is frustrated by his party’s bickering over his wish to cut a deal with the Government on emissions trading, writes Michelle Grattan in the Sydney Sun Herald

Your piece of Myer? First, try it on for size – Share investment is something different to liking a business and admiring a business success story. It’s a lot more to do with the price you are paying for your piece of this business and the balance of risk and return you are taking on at that price. And with Myer, you appear to be paying a reasonably hefty price for an awful lot of business risk. This is particularly so given that Myer is a well-established business and arguably close to trading at a peak at the moment – Melbourne Age

Mass grave for 100 offered as island’s death toll soars – Samoa is planning a mass burial for victims of the tsunami that devastated the Pacific Island last week, as the death toll from the disaster creeps towards 200 – Melbourne Sunday Age 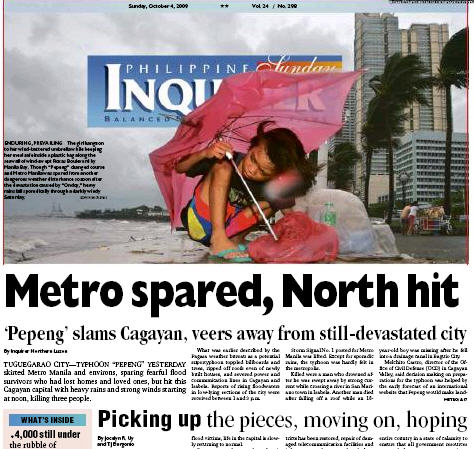 PM defies gallstones as Telethon aims for $millions – A painful case of gallstones did not stop Prime Minister Kevin Rudd flying to Perth to announce a federal government donation of $1.5 million to Telethon – Perth Sunday Times

Urgent cry for help for neighbours in need – Charities are urging Australians to donate ”as much as they can” to help those affected by the tsunamis in Samoa and Tonga, the earthquake in Indonesia and the typhoon which tore through parts of the Philippines, Laos, Vietnam and Cambodia – Melbourne Sunday Age

Don’t cave in to Coalition, climate lobby warns PM – The Federal Government will lose crucial support from a high-profile group of environmental, union and welfare lobbyists if it caves in to Opposition demands to water down its emissions trading legislation – Melbourne Sunday Age

New harassment law to rein in cyber bullies – Cyber bullies and schoolyard tormenters are more likely to be prosecuted under an overhaul of sexual harassment laws set to be introduced by the Federal Government. Australia’s anti-harassment laws – which currently do not cover victims under the age of 16 – are likely to be extended to protect younger children, who are widely considered by experts to be among those most at risk of sexual bullying – Melbourne Sunday Age

Casinos spend millions to make losers feel like winner – Governments have made some efforts to curb compulsive behaviour. In Ontario, the government spent $39-million in fiscal 2009 on treatment, research and prevention of problem gambling, with the Ontario Lottery and Gaming Corporation adding a further $9.6-million on responsible-gambling initiatives (the highest figure in North America, it says). But the same year, it laid out $558-million on marketing and promotion of casinos, more than half in comps – Toronto Globe and Mail

VicRoads struggles to rub out worst black spots – All but three of Victoria’s most dangerous roads and intersections are in Melbourne’s outer suburbs and the central business district, according to VicRoads’ latest black-spot list – Melbourne Age