A Prime Minister with gallstones and a bruised Premier battle on 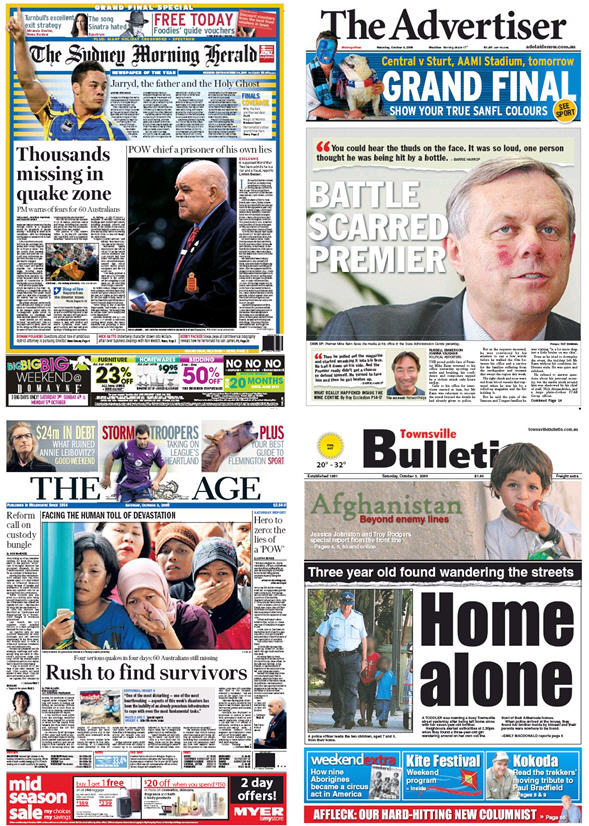 Aussie surfers missing in quake rubble – It will take days, even weeks, to determine if Australians have died in Padang – Sydney Daily Telegraph

Hopes fade for hundreds lost in destroyed city – Hopes for hundreds of people trapped under collapsed buildings in Padang faded yesterday, as diplomats frantically tried to account for as many as 60 Australians missing in the region that was hit by the big earthquake on Wednesday – Sydney Morning Herald

A message from God in Sumatra earthquake – The Australian

The great Samoan tsunami escape – An Aussie expat has detailed a remarkable escape from the Samoan tsunami, hanging by his fingertips as walls of water threatened to drown him. Finger marks remain on resort owner Chris Booth’s hut, which was swamped by waves up to 10 metres. Mr Booth said after being inundated, a later wave almost pulled him from his house, forcing him to hang on by his fingertips – Brisbane Courier Mail 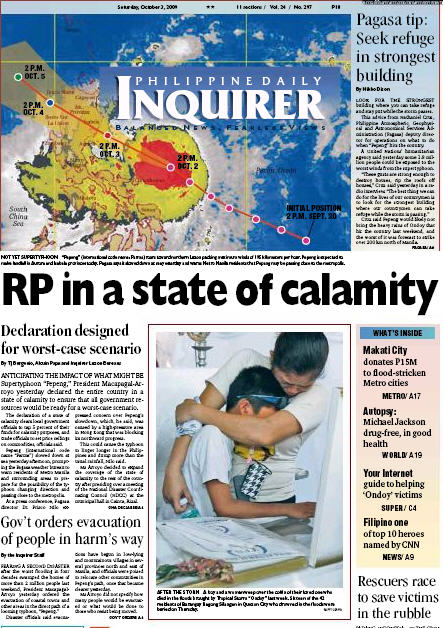 Battle-scarred Premier back at work – The proud public face of Premier Mike Rann returned to his office sporting red welts and bruising, his composure sapped by a violent attack – Adelaide Advertiser

Mike Rann bruised but unbowed after attack – The Australian

Lost tax the flipside of saving jobs – George Megalogenis in The Australian calculates that the new trend of hoarding staff in a downturn has had the same effect on the real economy as the retrenchment of more than 200,000 full-time jobs.

My way for jobs and votes: Turnbull – Malcolm Turnbull says he is insisting the Liberal Party negotiates on the emissions trading scheme to try to protect thousands of mining and rural jobs and avoid an electoral “wipe-out”. But he says the Coalition could still vote against the legislation if the Rudd government refuses amendments removing agriculture and coalmining from the scheme and improving protections for other heavy industry – The Australian

Some glue, a piece of 4×2 but no rope, thanks – A campaigning Malcolm Turnbull meets an old school chum in his hardware store – Sydney Morning Herald

Medich talks business with underworld figure – The Melbourne underworld figure Mick Gatto and the Sydney property developer at the centre of the McGurk affair, Ron Medich, have been exploring business opportunities together.Mr Gatto, who was acquitted of the murder of underworld hitman Andrew ”Benji” Veniamin in 2005, confirmed he met his ”friend” Mr Medich in Melbourne to see if Mr Medich could rescue a troubled development in Chapel Street, South Yarra – Sydney Morning Herald

Fine feathered factional friends – Miranda Devine in the Sydney Morning Herald writes of a a win-win for Turnbull. If he loses, he exits with dignity. If the backbench buckles, they will regain neither the moral high ground nor the respect of their electorates. Either way, the Liberal Party is damaged. Divisions in the party already run deep in Turnbull’s home state, culminating on Wednesday night in an extraordinary fracas at the Castle Hill electorate office of federal MP Alex Hawke.

Malcolm Turnbull told to take ownership of green issues – Laurie Oakes in the Brisbane Courier Mail (and other News Ltd papers)writes how Malcolm Turnbull’s UK trip confirmed – if he ever doubted it – the importance of green policies to his party’s electoral prospects.

When Winnie the Pooh meets the prophets of gloom – Peter Hartcher in the Sydney Morning Herald ssees Kevin Rudd and Wayne Swan having such a good crisis that they don’t want it to end. The crisis has plainly passed and the economic prospects brighten by the day, yet there is no news so good that they can’t find a dark lining. This is a complete inversion of the norm, where a government just loves to boast of how everything is perfect yet improving.

The cat is out of the bag – The Opposition Leader may have pulled the wrong lever with his back-me-or-sack- me ultimatum, writes Phillip Coorey in the Sydney Morning Herald.

You’ll never be happier, but keep working at it – Ross Gittins in the Sydney Morning Herald gets a little philosophical.

Bully sermon rouses dissenters – Peter van Onselen writes in The Australian that imbroglio is not a word regularly used in the English language but it is an apt way to summarise the situation in which Liberal leader Malcolm Turnbull finds himself. It means an acutely painful or embarrassing misunderstanding, or a bitterly complicated situation.

After the storm, a deluge of debt –  Lenore Taylor in The Australian writes how two federal departments treating grant funds in a different fashion led to a $1.5 billion budget mistake.

Spread the word: you don’t mess with diggers or our sacred Vegemite – Tony Wright in the Melbourne Age takes a look at branding and some lessons for political movements.

Party on the ropes – Shaun Carney in the Melbourne Age on how 13 months of slipping polls, the misjudgment of the Godwin Grech affair and some bad, and often inexplicable, calls on economic policy have obscured Turnbull’s original promise as Liberal leader. But some of that promise returned on Thursday when Turnbull chose to take on the ragtag opponents in his party room over the Government’s emissions trading scheme legislation – Melbourne Age 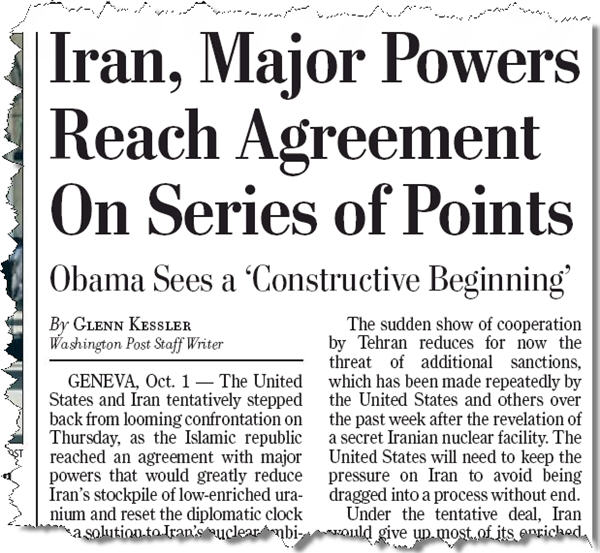 Iran, Major Powers Reach Agreement On Series of Points – The sudden show of cooperation by Tehran reduces for now the threat of additional sanctions, which has been made repeatedly by the United States and others over the past week after the revelation of a secret Iranian nuclear facility – Washington Post

White House Eyeing Narrower War Effort – Senior White House officials have begun to make the case for a policy shift in Afghanistan that would send few, if any, new combat troops to the country and instead focus on faster military training of Afghan forces, continued assassinations of al-Qaeda leaders and support for the government of neighboring Pakistan in its fight against the Taliban – Washington Post

Myer tarted up for sale but far from attractive – There’s nothing very attractive about the upcoming Myer float, according to some analysts who have spent the past week crunching the numbers. The offer is “outrageously” overpriced and opportunistic, they say – Sydney Daily Telegraph 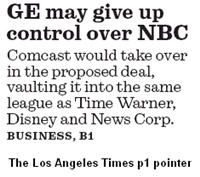 GE appears ready to hand over control of NBC Universal to Comcast – Under terms of the deal, Comcast would pool cash and its cable channels into a new company that it would control with a 51% stake. GE would contribute NBC Universal and own 49% – Los Angeles Times

Julia Gillard biographer review slammed – The publisher of Penguin books in Australia, Ben Ball, has accused the new editor of the Melbourne-based literary magazine The Monthly of a “gross betrayal of basic editorial standards” for allowing the author of one biography of Julia Gillard to critique another in the October issue – The Australian

Big fines to stamp out pill presses – Illegally importing pill presses, which are used to manufacture amphetamines, will attract new fines of $110,000 as the Rudd Government moves to clamp down on the illicit drug industry – Brisbane Courier Mail

Make drugs legal, says former US police chief – A retired American police chief will tell a Sydney audience tomorrow that the war on drugs has been a failure, and a disaster for police forces. Norm Stamper retired as chief of police in Seattle in 2000, and is a spokesman for Law Enforcement Against Prohibition, a fast-growing US organisation of 13,000 current and former police officers, prison warders, prosecutors and judges – Sydney Morning Herald

Kids on caffeine overdose – More than three quarters of energy drinks on sale in NSW and available to children contain illegal levels of caffeine, with some breaking the law by 30 per cent – Sydney Daily Telegraph

Drinkers pour scorn on reduced-strength VB – Drinkers are bitter over the latest change in the recipe of Australia’s favourite beer. In August, Carlton and United Breweries cut the alcohol content of Victoria Bitter by 0.2 per cent, but many regular drinkers are upset at what they see is a definite flavour change, and the issue has sparked a flurry of letters and texts to the Melbourne Herald Sun.

Strong demand cuts house discounts – Sydney houses are now typically selling with a 6.2 per cent discount on asking price, as competition from buyers has prompted the lowest level of discounting since 2004. Prices have risen in each of the last six months. Private treaty sales have been below the 7.3 per cent long-term average discount since March – Sydney Morning Herald

Camp dog dreaming – In a story of rags to riches, this Territory camp dog has gone from death row to waterfront views in an exclusive Sydney home. Mr Fluff is one of the eight camp dogs that have been adopted by well-to-do families since July – Northern Territory News

Doctors fear too few patients will have swine flu jab – Fewer than one-third of Australians are likely to seek immunisation against swine flu, experts fear, and the possibility that the new strain may be included in next year’s regular winter flu shot could further undermine the program – Sydney Morning Herald