South Australian Premier attacked by man armed with a knife

Hopes high visitors rode out wave after Indonesia earthquakes – Grave fears are held for Australians surfing almost directly above the epicentre of the Sumatran quake. Padang, the capital of West Sumatra, which was at the epicentre of the quake, is the gateway to the surfing hot spots across the Mentawi Islands – Melbourne Herald Sun 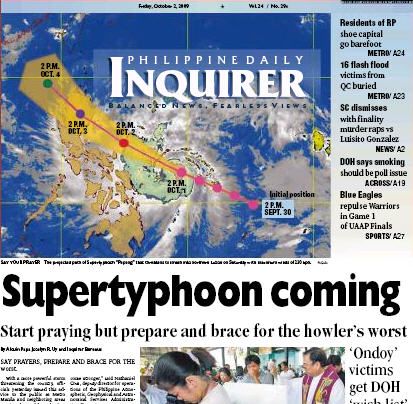 Supertyphoon coming – Forced evacuation; possible Signal No. 4 in Luzon – Say prayers, prepare and brace for the worst. With a more powerful storm threatening the country, officials on Thursday issued this advice to the public as Metro Manila and neighboring areas continued to reel from the devastation wrought by Tropical Storm “Ondoy.” The weather office said Typhoon “Pepeng” (international name: Parma) could develop into a supertyphoon within the next 24 hours and would not weaken even if it made landfall – Philippine Daily Inquirer

Premier Rann attacked at Wine Centre fundraiser – Premier Mike Rann was hit in the face by an attacker and allegedly threatened with a knife at a fundraising function in the National Wine Centre last night. He suffered bruising and a minor cut to his face when he was set upon by a man during a Labor Party SA Progressive Business function at North Tce in the city around 8.30pm. It is understood Mr Rann’s alleged attacker had left a wine-tasting function, rushing down stairs towards the guests. Mr Rann, who was sitting at a table, was attacked from behind – Adelaide Advertiser

Back me or I’ll go: Turnbull – Embattled Opposition Leader Malcolm Turnbull has drawn a line in the sand, declaring his leadership will stand or fall on his ability to deliver an active policy response to climate change. The extraordinary display of political courage has stunned supporters and detractors alike, and revealed the pro-green leader has decided continuing public disunity has gone far enough – Adelaide Advertiser

Back me or sack me: Turnbull – A threat by Malcolm Turnbull to walk away should the backbench defy him over climate change has further entrenched divisions within the Coalition and raised doubts about whether he will be leader beyond Christmas – Sydney Morning Herald

Malcolm Turnbull risks all in carbon debate – Malcolm Turnbull is on a collision course with his own back bench after staking his leadership on a demand that they back his climate change strategy. Several MPs immediately refused to do so – The Australian

Cup of java fuels Malcolm take-off – Christian Kerr in The Australian on a day of comments by Malcolm Turnbull on leadership and emissions trading.

Don’t cut the stimulus, IMF warns – There is a “significant risk” the global recovery will stall and governments must hold off on relaxing stimulus, the International Monetary Fund has warned – Adelaide Advertiser

Treasury signals tax break on savings – Ken Henry has signalled possible cuts to taxes on savings to help pay for infrastructure needs and the ageing population. The Treasury secretary, months away from delivering his review of the tax system, said the old ideal of taxing income earned from work and savings at the same rate was no longer appropriate – Sydney Morning Herald

‘Hot cakes’ go cold – Plans to build 32 “shoe-box” sized expandable houses at Bellamack have been scrapped after the proposal faced heavy criticism. Chief Minister Paul Henderson announced the plans for affordable housing in June and defended criticism that the 150sq m blocks of land were too small – arguing the houses would “sell like hotcakes” – Northern Territory News

Rise of refugees fleeing war zones – More than 600 asylum seekers have been granted refugee visas in the past 10 months, more than the number of illegal arrivals recorded in the previous six years. As border protection authorities intercepted yet another boat yesterday, figures showed 645 asylum seekers – mainly from Afghanistan, Iraq and Sri Lanka – were granted visas and resettled on the mainland since the start of the year – Sydney Daily Telegraph

Asylum boat fire ‘lit on purpose’ – A fatal fire on board a boat carrying 47 asylum-seekers was deliberately lit by one or more of the passengers, Northern Territory police have concluded – The Australian

State government to give presents to foreign students – The State Government’s international education division has spent about $7000 on a welcome to Victoria project that includes a letter from Education Minister Bronwyn Pike accompanied by a “small gift”. The gift, worth about $10, is a USB stick containing an electronic welcome message and is given to each new international government school student. The Opposition has attacked the project as a waste of money and says the Government is avoiding the real issues, but the State Government says it is just a way to wish students luck – Melbourne Herald Sun

Kindness can break through cultural barriers – Katherine Kizilos writes in the Melbourne Age that the good stories about foreign students have been hidden for too long.

This wretched place needs so much, but are we prepared to deliver? – Cynthia Banham writes in the Sydney Morning Herald that coalition allies are in an uncomfortable state of limbo, awaiting direction from Barack Obama on where he will take the increasingly unpopular war in Afghanistan.

No time to be a timid little nation – Richard Ackland writes in the Sydney Morning Herald that the report from Father Frank Brennan’s human rights consultation was received by the Attorney-General, Robert McClelland on Wednesday. It will be made public, with the Government’s response, next week. The recommendation most likely to emerge is for an enhanced Senate or joint parliamentary committee to review legislation and determine whether it is inconsistent with a nominated list of rights and values.

Leader plays for high stakes against rebels – Michelle Grattan in the Melbourne Age describes it as a typically Turnbull gesture. All or nothing. Take it or leave it. Malcolm Turnbull has returned from abroad in a defiant, some would say reckless, mood. He is telling his Liberal Party: take my position on climate change, or I quit.

Leader facing two partyroom showdowns – Lenore Taylor explains how the first comes on October 20 when Turnbull asks the partyroom to approve a set of amendments before he starts negotiations with the government.  After the negotiation the Coalition partyroom needs to agree how it should vote. It is here that the fundamental differences of view will be almost impossible to reconcile – The Australian

Farmers may be bankrupted by plan – Dennis Shanahan in The Australian quotes Nationals MP Mark Coulton: “”Regional Australia is the sacrificial lamb at the altar of the Rudd government’s ETS and it should come as no surprise to the Prime Minister that the people of regional Australia won’t stand for it.”

Bad economics not harmless – Henry Ergas in The Australian pokes some economist’s fun at the good people of Bundanoon and their ban on the sale of bottled water. 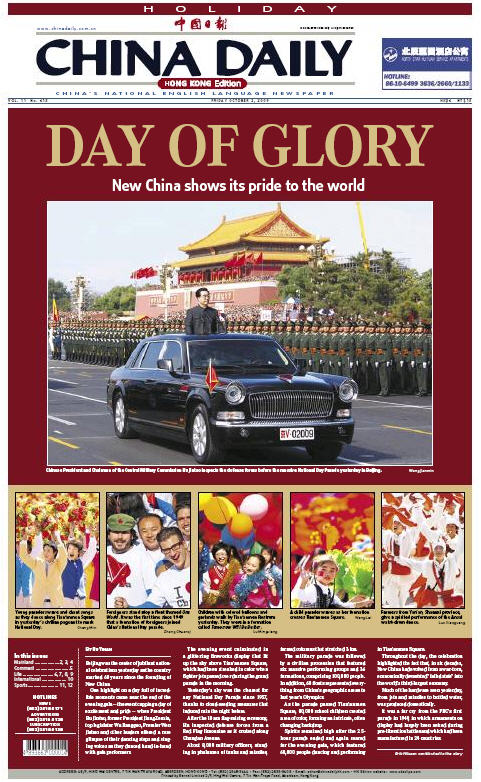 The protesters won: no democracy, but a true Great Leap Forward – Ross Cameron in the Sydney Morning Herald speculates that the Chinese people are content with their government. If a referendum offered ”multi-party democracy” or ”current arrangements” the latter would romp home. After three centuries of upheaval, the Chinese are basically happy.

Do you want Pi with that? Students gorge on McMaths program – McDonald’s has pulled off one of the marketing coups of the year by signing up more than 230,000 students to a free maths program across NSW. The fast food chain’s biggest foray into the school education system involves 46 per cent of the state’s secondary students. Under the scheme the Maths Online tutoring program – usually costing $40 per month – is provided free to individuals, classes or entire schools in the government, Catholic and independent systems – Sydney Daily Telegraph

Board pay reforms hit old boys club – The “old boys” network deemed to dominate the boards of corporate Australia could be busted open if the Rudd government accepts a recommendation by the Productivity Commission to end the so-called no-vacancy rule, which allows boards to limit new nominations to themselves – The Australian

Uproar as GM canola ‘contaminates’ beehive – Genetically modified canola has jumped containment lines and “contaminated” a commercial beehive in western Victoria, prompting claims that people are not being told enough about what they eat – Melbourne Age 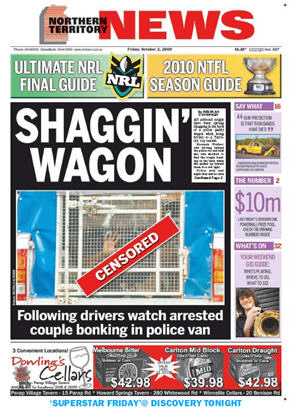 Shaggin’ wagon – An arrested couple have been sprung shagging in the back of a police paddy wagon while being driven to a Territory cop station. Hannah Walker was driving behind the police car and said she was shocked to find the couple bonking in the back when she pulled up behind them at a red light. Police said last night they had no idea about their randy rendezvous – Northern Territory News

Peers, not parents, responsible for binge drinking – Drinking campaigns shaming parents who pass bad alcohol habits on to their children may not be on the right track, new research shows. The study found peers overrode the influence of parents when it came to influencing university students’ drinking habits – Adelaide Advertiser

Outrage at ABC TV Hungry Beast Liz Ellis group sex skit – Australia has condemned an ABC Television skit featuring a fake interview with a man claiming to have been sexually assaulted by the national team. The skit, a clear reference to May’s Four Corners interview with the woman at the centre of the Cronulla group sex scandal, is due to air on ABC’s new current affairs/comedy crossover show, Hungry Beast next Wednesday. A promo for the skit aired on Wednesday night – Sydney Daily Telegraph

Indifference to Tozer’s genius is a disgrace – Paul Keating’s eulogy at the memorial service for the late pianist Geoffrey Tozer said if you think of our greatest artists, those who are so regarded in world terms, three come to mind: Nellie Melba, Percy Grainger and Joan Sutherland. In terms of sheer artistry and musical power, Geoffrey Tozer could well be the credible addition to that triumvirate.