A day of natural disasters – tidal waves, earthquakes and floods

No warning as Pacific Ocean tsunami strikes – The Australian

‘Truckloads’ of bodies pile up after Samoan tsunami – Food, medicine and temporary morgues are being sent to the Samoan islands after yesterday’s deadly tsunami flattened villages, killing at least 113 people, including four Australians – The West Australian

The day horror struck paradise – Paradise was pulverised. The physical damage to the islands of Samoa was immediately apparent but the human toll of the earthquake and tsunami won’t be certain for days. At least 84 people have been confirmed dead in Samoa, including a six year-old Australian girl and tourists Maree Blacker and Vivien Hodgins. A further 22 were killed in neighbouring American Samoa and seven in Tonga – Sydney Daily Telegraph

Samoans had little chance to escape – The Australian

Killer quake hits Indonesian island of Sumatra – UPDATE 6.24am: THE death toll from an earthquake in Indonesia may number up to 1000 people, officials fear. There are already 75 people confirmed dead in the second natural disaster to rock the region in two days – Melbourne Herald Sun

Earthquake hits Indonesia’s Sumatra island – At least 75 people have been killed and thousands are trapped, feared dead, underneath rubble after a major earthquake hit Indonesia’s Sumatra island. Large buildings including hospitals and hotels caved in, homes fell down and fires raged in the coastal city of Padang, home to nearly a million people, as communications and power remained cut hours after the 7.6-magnitude quake – News.com.au

Fears for thousands as second quake strikes region – Aircraft carrying medical teams and emergency supplies were on the way last night from Australia to the South Pacific, where hundreds of people are feared dead after massive tsunami waves yesterday slammed into the islands of Samoa, American Samoa and Tonga. There are also fears today of a major disaster unfolding on the Indonesian island of Sumatra, where a powerful earthquake flattened buildings in the city of Padang. At least 75 people are dead with thousands feared trapped under buildings after the quake, measuring 7.6 on the Richter scale, struck off the coast of western Sumatra at 5.16pm local time (8.16pm Melbourne time) – Melbourne Age 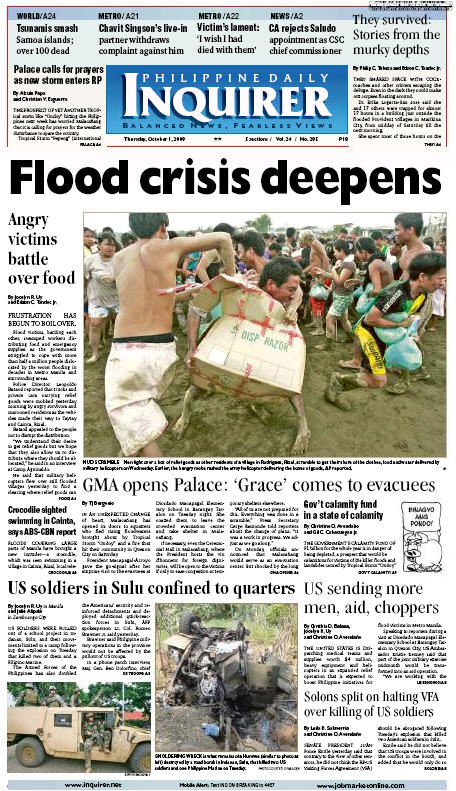 Flood crisis deepens – Angry victims battle over food – Frustration has begun to boil over. Flood victims, battling each other, swamped workers distributing food and emergency supplies as the government struggled to cope with more than half a million people dislocated by the worst flooding in decades in Metro Manila and surrounding areas – Phillipine Daily Inquirer

Weary Filipinos brace for new storm – Filipino flood survivors have been warned to brace for another potentially deadly storm, as the number of people affected by the heaviest rains in decades soared past 2.2 million. Five days after tropical storm Ketsana ravaged Manila and neighbouring areas, parts of the capital remained submerged in murky water, while people crowding into shelters were desperate for food, water and other aid. The storm killed at least 246 people – Melbourne Age

Kevin Rudd building own war room – Prime Minister Kevin Rudd is building his own hi-tech war room just a few paces from his office. Like the White House “situation room”, it will be used to co-ordinate government responses to natural disasters and terror attacks. The PM has evicted about 20 public servants from an area next to the Cabinet room to free up space for his crisis co-ordination centre – Brisbane Courier Mail

I didn’t discuss development with Medich, says Macdonald – The Primary Industries Minister, Ian Macdonald, met the developer Ron Medich twice at Tuscany Restaurant in Leichhardt in 2008, at a time when Mr Macdonald was being backed by powerbrokers Eddie Obeid and Joe Tripodi to become the state’s planning minister – Sydney Morning Herald

Elders prefer bush work over jail for Aborigines – Aboriginal elders want more youth programs in the Kimberley to prevent indigenous children ending up in detention thousands of kilometres away from family and culture, and stop a downward spiral from which they rarely escape – The Australian

Darwin plan for illegal arrivals on boats – More than 16 boatpeople a day sought refuge in Australia last month in the biggest surge in arrivals since the start of the decade, forcing Canberra to consider transfers from Christmas Island to Darwin to accommodate the rush – The Australian

Inconvenient economists – Don Harding, professor of economics at La Trobe University, defends the usefulness of research economists in The Australian and queries how is it good economic policy to run up a deficit and spend the proceeds in a way that hurts our traded goods sector? How does this protect jobs?

Migrants key to replacing baby boomers – Bernard Salt in The Australian writes that Australia, and he suspects the rest of the developed world, has entered or will soon enter a phase of heightened population growth. Although current population projections for Australia outstrip projections for other nations, such as the US and Canada, those two will surely revise their outlooks in due course.

PC gets it right on exec pay – Terry McCrann in the Melbourne Herald Sun writes that the Productivity Commission has produced a very measured and cool-headed analysis of executive pay and this has led to a set of sensible and even quite elegant recommendations.

Why Leigh Robinson should die – Daniel Robinson in the Melbourne Herald Sun writes that his stepfather took the lives of two women, 40 years apart. “There is no doubt in my mind that he should pay the ultimate penalty for his crimes.”

Cold-blooded killers – Kate Lauretta writes in the Melbourne Herald Sun: “In 1968 a 17-year-old girl was stabbed to death in the kitchen of her own home. From that moment, life for those involved would never be the same. I am the niece of Valerie Dunn, the teenager who was murdered that day by Leigh Robinson. This week, Robinson was convicted of of the murder of Tracey Greenbury last year. It is often said that with rehabilitation and counselling, we are able to turn cold-blooded killers into normal human beings. But Tuesday’s verdict has proved us wrong.”

It was the most brutal act I ever saw – Brian Morley in the Melbourne Herald Sun tells of the day he watched an execution and says the death penalty has no place in modern society. It is the most abhorrent act available to man – the deliberate taking of a human life in the name of justice.

A playground for the vile and dangerous – Piers Akerman in the Sydney Daily Telegraph reckons searching for truth at the United Nations is like looking for kernels of wheat in a mountain of horse dung.

Shareholders to get powers on pay – Shareholders have welcomed proposed new powers to sack board members who approve excessive, multi-million dollar salaries, while supporting the rejection of a cap on executive pay – The Australian

Executive crackdown but no cap on salaries – Shareholders will be given a greater role in setting corporate salaries after the Government and Opposition gave in-principle support to draft recommendations to curb executive excess – Sydney Morning HeraldNational Stock Exchange to list frozen funds – The nation’s second largest share trading platform, the National Stock Exchange, is preparing to list dozens of frozen mortgage and property funds – holding hundreds of millions of dollars – in a bid to return funds to desperate investors – The Australian

Climate folly before failure – Alan Wood writes in The Australian that the The looming failure at Copenhagen is a powerful argument against Australia rushing to pass the Rudd government’s flawed emissions trading scheme, which isn’t even proposed to start operating until 2011. For Australia, with an economic structure heavily dependent on cheap, carbon-based energy, to move ahead of the rest of the world is foolish.

After 43 years, Trading Post now a dream – From the end of October Trading Post will be exclusively online, at the cost of 279 jobs – The Australian

Celebrity MasterChef, NCIS: Los Angeles, Hey Hey It’s Saturday Reunion launched for TV ratings – In a month of hits and misses, September has emerged as the new television battleground, with the networks rushing out their best and brightest shows in a bid for ratings – Sydney Daily Telegraph

Call to bring back the noose after Leigh Robinson sentenced – The killer who escaped the noose in the ’60s only to kill again 40 years later has sparked a debate on whether the death penalty should be reintroduced. A poll conducted in Melbourne, where Leigh Robinson committed his crimes, found 78 per cent of about 3000 respondents voted for the return of capital punishment – Sydney Daily Telegraph

Parents blameless in rising teenage drinking – Drinking campaigns shaming parents who pass bad alcohol habits on to their children may not be on the right track, new research shows – Melbourne Herald Sun

All bets off for drunken yobs – Punters have been warned that drunken yobbish behaviour will not be tolerated during the Spring Racing Carnival. The race to the Melbourne Cup is on after Acting Premier and Racing Minister Rob Hulls launched the 50-day party, which is worth about $550 million to the state – Melbourne Herald Sun

Darwin property prices go through the roof – Darwin’s property prices are continuing to skyrocket and jumped close to 10 per cent in the first eight months of this year. Only Melbourne, which has fought out of a 2008 slump, has achieved bigger growth since January – Northern Territory News

WTF? Richard, I’m a bit confused by that graphic from Reuters (?) re the Indonesian earthquake.
Headline says a 7.9 quake and then further down on the map it says 7.6.

They are *very* different beasts.
Sub editor asleep at the wheel perhaps?