Labor ad takes on ‘gouging’ surgeons – The Federal government has accused eye surgeons of running a “dishonest scare campaign” over its plans to slash Medicare rebates for cataract surgery, in a new advertising pitch to win public support for the move – The Australian

Labor hits back at eye doctors’ campaign – The Rudd Government, under fire over cuts in Medicare payments for cataract surgery, has launched a hostile online counter-attack through the Labor Party – Melbourne Age

Boat people bluffing us, says Joyce – A large proportion of the boat people now on Christmas Island appear to be economic migrants, not refugees facing persecution, Nationals Senate leader Barnaby Joyce has claimed. In provocative comments made during a parliamentary visit to the island, Senator Joyce said all the people he had seen ‘‘seem very happy here — which is a concern’’ – Melbourne Age

RBA backs stimulus hit but vigilant on ‘over-heating’ – Reserve Bank governor Glenn Stevens says there could be a case for the government to defer stimulus spending if the economy looks as if it will overheat in the next two years, conceding there is a trade-off between the government’s budget spending and interest rates – The Australian

Recovery spells doom for low interest rates – The Federal Government’s stimulus measures have passed muster with Glenn Stevens, who has indicated he is keen to start lifting interest rates. The Reserve Bank governor yesterday suggested the peak in unemployment may not be far away, another pointer to a possible rate rise next week – Sydney Morning Herald 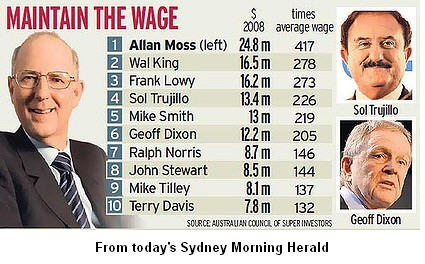 Medich rezoning not ruled out before meeting – The property developer Roy Medich and the Labor identity Graham Richardson were told there was still a chance of rezoning contentious land at Badgerys Creek when they met the director-general of the NSW planning department, Sam Haddad, early this month. The revelation is in a Planning Department submission to the parliamentary inquiry into corruption allegations following the murder of the moneylender Michael McGurk, which is set to begin today. It runs contrary to Government claims the inquiry is a waste of time because the land was never rezoned – Sydney Morning Herald

Dismay as trucks roll in to replace closed rail line – The Mayor of Moree Plains shire, Katrina Humphries, predicted there would be a serious accident involving a grain truck, as her council struggled to maintain just 40 per cent of its roads yearly, including 2000 kilometres of unsealed roads – Sydney Morning Herald

Beautiful one day, richer the next: our GST travels north – Queensland will receive an extra $670 million in GST revenue next financial year, largely at the expense of NSW, which will lose $434 million, the NSW Treasury estimates – Sydney Morning Herald

Our clogged freeways just keep on truckin’ – New figures published by VicRoads show the goods carried by trucks on Melbourne’s roads have grown by a massive 50 per cent in the past decade. The boom in road transport has come as rail freight has collapsed to carry what one expert said was just 2.5 per cent of the state’s freight load – a quarter of what it was a decade ago – Melbourne Age

Aborigines more likely to go blind – A comprehensive assessment of more than 2800 Aborigines and Torres Strait Islanders from 30 communities last year found that 1.9 per cent of the adult population was blind – six times the rate among non-indigenous Australians – Melbourne Age

War widows ‘should get soldier pay in full’ – The families of military personnel killed in wars should be given a home and they should continue to be paid the equivalent of the dead soldier’s salary, says the Australia Defence Association – Melbourne Age

Campaign on war pensions neglect – Angry veterans are planning to campaign against the Government, claiming they were “dudded” over a promise to boost their pensions – Sydney Daily Telegraph

Digger’s widow Breeanna Till gains powerful ally over pension – Commonwealth Ombudsman John McMillan has joined pregnant war widow Breeanna Till in criticising the gaps in the Military Rehabilitation and Compensation Act 2004, which accounted for one-fifth of the 162 complaints lodged with his office about the Department of Veterans’ Affairs last financial year – The Australian

Club staff owed $5 million back pay – Thousands of low-income NSW club workers across NSW have been underpaid a total of $5 million, with women the main victims – Sydney Daily Telegraph

Safety net for Lib rising star Peter Dutton – A hotly contested preselection involving federal Liberal frontbencher Peter Dutton must be ratified by the leadership of Queensland’s merged Liberal National Party, providing a backstop if his bid to switch seats is rejected by the local members – The Australian

Rudd changed the world order, says Rudd – and compliant media – It is important that Australian prime ministers travel internationally. And it is understandable that they tend to regard their contributions to international developments as somewhat more significant than is the case. However, problems emerge when sections of the media get caught up in the political hype – Gerard Henderson in the Sydney Morning Herald

It’s little things that count when the economic emergency ends – Tim Colebatch in the Melbourne Age writes that higher interest rates will be needed to keep the economy healthy.

Leader can’t just ignore his MPs – Peter van Onselen in The Australian believes Malcolm Turnbull might have to rethink how he treats his back bench. He doesn’t have the authority of a managing director or a prime minister. He is the Opposition Leader of a Coalition disunited on what to do about the government’s ETS legislation.

Earning seat at the table – Michael Sutchbury in The Australian argues that Australia’s G20 membership is the pay-off from a quarter of a century of sensible pro-market reforms that have produced one of the world’s strongest economies.

Straying Nats will end in divorce – The big morale boost for the Nationals contained in the latest Newspoll analysis of voting trends will not help to preserve its rocky Coalition marriage with the Liberals says Malcolm COlless in The Australian.

G20 the right body for economic leadership – Kohn Denton in the Melbourne Age writes that the group has proven itself the best forum for its times.

A Rising Yen Leads Japan Into a Tricky Balancing Act – The yen is now about 11 percent stronger against the U.S. currency than it was in early June. This month alone, it has firmed about 4 percent against the dollar. The steady upward movement in Japan’s currency comes as its economy is still struggling to extract itself from its deepest recession in decades – New York Times

What to expect from Berlin after Angela Merkel’s return to power – The new German Government is likely to become more assertive in the world. Its guiding principle — this much is clear from Free Democrat strategy papers — will be to encourage any policy that increases German business opportunities, and to reclaim from China the country’s position as the world’s top exporter – London Times

ASIC turns up heat on ASX – The Australian Securities Exchange has been told to investigate the debacle surrounding listed toll-road builder BrisConnections, as well as examine its treatment of retail investors in general, following a report scrutinising the exchange’s performance during last year’s market crisis – Melbourne Age

Cassimatis has memory blank – Emmanuel Cassimatis headed a company with $4.7 billion under advice and management but yesterday he couldn’t even remember if he was managing director. Mr Cassimatis, founder of failed wealth adviser Storm Financial, appeared for a public examination into the affairs of the company in the Federal Court in Brisbane yesterday but had difficulty answering many of the questions – Townsville Bulletin

Turf scientists on a quest to engineer a superlawn – The goal: Grass that’s drought-proof, pest-resistant, oh, and a nice shade of green. It’s a tall order, but the need is great as water becomes increasingly scarce – Los Angeles Times

Copenhagen negotiating text: 200 pages to save the world? – Draft agreement being discussed ahead of December’s crucial Copenhagen summit is long, confusing and contradictory – London Guardian

Hoey heave-ho upsets fans – Fears for the future of a Surry Hills hotel mushroomed last night as patrons poured out their grief online after the much-loved live music venue was shut down for undisclosed reasons. “The Hopetoun Hotel is closed until further notice,” a notice stuck on the door said. “We apologise for any inconvenience to our patrons.” – Sydney Morning Herald

Crown chiefs face rap for Fevola binge – Ten directors of Crown, including chairman James Packer, face fines of up to $28,000 each over the fuelling of Carlton star Brendan Fevola’s drunken antics at the casino on Brownlow Medal night – Melbourne Age

International bid for Polanski release – The arrest of filmmaker Roman Polanski in Switzerland on sexual assault charges from 1977 has sparked an international incident, with Poland and France to lobby US Secretary of State Hillary Clinton to intervene – Sydney Morning Herald

Warning on property rebound – Property prices are continuing to climb and the strengthening market could post a double-digit price rise this year, industry pundits predict. But Real Estate Institute of WA deputy president David Airey has warned the quicker-than-expected recovery could spell bad news for the property market in the long term because it increased the risk of a price bubble – The West Australlian

Obviousy the Clerk of the Queensland Parliament Neil Laurie has carried out some long term research and personal observations to produce his submission on the drain of ethics and accountability within the Beattie/Bligh governments. Amongst his recommendations or pillars of ethics and integrity are leadership, culture, clear rules and standards and protection for whistleblowers – none of which he’s promoted in the past. In essence Mr Laurie implies he can now see the big picture. What a shame he’s been so slow to vocalise these observations.