Merkel wins; this time Germany to have Center-Right government

The pick of Monday morning's media

Budget in $10 billion rebound – The Rudd government will reveal an improvement of up to $10 billion in the past year’s budget bottom line this week, while the increasing strength of the economy is forcing Treasury economists to greatly upgrade their forecasts for the next three years – The Australian

Kevin Rudd’s stimulus wins G20 backing – Universal endorsement from US President Barack Obama, other G20 leaders and international bankers for economic stimulus as a means of protecting jobs has bolstered the Rudd government’s argument for its massive building plans – The Australian

Public debt monster that will feed on itself – become quite apparent from the ongoing Senate committee inquiry into the fiscal stimulus that debate over the size and efficacy of the largest fiscal turnaround in Australia’s history has become a highly partisan issue, influenced as much by politics as by genuine interest in the latest economic thinking. It simply need not have been so writes Tony Makin in The Australian

Wayne Swan and Joe Hockey clash over pay limits – A sharp divide has emerged between the Rudd government and the opposition on executive pay, with Wayne Swan warning he is “very serious” about cracking down on “obscene” salaries, but Joe Hockey arguing the issue is best left to shareholders – The Australian

Kevin Rudd loses ground in his home state and the bush – Newspoll in The Australian analyses the last quarter of polls to come up with the conclusion that the Coalition is doing better in the bush than the cities and improving in Queensland while going backwards in WA.

Labor may get burnt in Sunshine State – Andrew Fraser writing in The Australian sees the performance of Anna Bligh’s state ALP government – which has dived in the polls since its re-election in March – rubbing off on the federal government.

Poll results offer opposition merest glimmer of hope – Lenore Taylor in The Australian says before Barnaby Joyce and his Coalition country cousins start popping the champagne, it pays to look at the latest Newspoll breakdowns in detail. They show Labor’s vote has been pared to the same levels as at the 2007 election in two states (Queensland and NSW) and in regional Australia. Everywhere else Labor continues to poll well ahead of its 2007 election result.

Coalition admits it could lose on climate – Warning that the threat of a double-dissolution election was so great the Liberal and Nationals must now work to amend the Rudd government’s legislation, Ian Macfarlane said yesterday his goal was to craft amendments that would bring the Nationals back inside the tent – The Australian

War in Afghanistan splits the nation – A poll of 1000 voters conducted by UMR Research showed the Prime Minister, Kevin Rudd, would have a hard task politically should he decide to increase the commitment in response to a request from the US. The poll found 41 per cent of voters supported Australian troops being involved in Afghanistan and 35 per cent were opposed. Opposition to sending more troops remained high. Only 26 per cent agreed; about twice as many, 51 per cent, were opposed – Sydney Morning Herald

Young Coalition voters an endangered species – The federal Coalition is in trouble now and into the future unless it sharpens its appeal to younger voters, a study of long-term voting patterns reveals. It shows successive generations are less likely to start out voting for the Coalition than the generation that came before it. It is questionable whether enough of the younger voters will become conservative as they age to compensate for the lower level of initial Coalition support – Sydney Morning Herald

Figures indicate a police race bias in juvenile arrests – Police across Australia are far more likely to arrest young Aborigines and see that they go to court than non-indigenous juveniles, who are considerably more likely to be let off with a warning or caution – The Australian

No place like home – and that’s a tradition – Aborigines in Arnhem Land have sent a strong message to the Rudd Government, telling the Environment Minister, Peter Garrett, they want to live on their ancestral homelands. In private and public meetings, traditional owners told Mr Garrett they did not want their children growing up in larger communities racked by alcohol and drug abuse and domestic violence – Sydney Morning Herald

Pension increase gouged by rents – NSW and other states will raise public housing rents for single aged-care pensioners in tandem with their $30-a-week pension increase, defying the wishes of the Prime Minister – Sydney Morning Herald

Calls for overhaul of submarine manager – The Sydney Morning Herald has been told that the Government, the Department of Defence and the Royal Australian Navy are seriously concerned at the way ASC, formerly the Australian Submarine Corporation, is maintaining the existing fleet of six Collins Class submarines.

Big rush to help war widow – The Government will urgently investigate the plight of the widow and children of a soldier killed in Afghanistan after it emerged that despite promises of support, the family was surviving on a small pension and hunting for a home – Sydney Morning Herald

How HSC students won the right to know – Determined students have helped break the cult of secrecy around HSC marking, writes Anna Patty in the Sydney Morning Herald

Dispute on teacher standards body – Teachers will be accredited against a national set of standards setting out quality and excellence in the profession under a plan to be considered today by education ministers. A National Teachers Institute to set standards and accredit teachers would not have representation from teachers’ unions – The Australian

Let’s think twice about growth by immigration – Ross Gittins in the Sydney Morning Herald points out that from a narrow materialistic point of view, immigration-fed growth in the economy is good only if it raises the real average incomes of the pre-existing population. And it’s debatable whether it does.

The ambassador who saw the future – John Garnaut in the Sydney Morning Herald looks at cables from China in 1976 in which then Australian Ambassador Stephen Fitzgerald predicted the current China boom with his GDP forecast being correct almost down to the decimal point.

Will Wayne plan pass the IMF test? – Michael Stutchbury in The Australian concedes Wayne Swan scored political points over the Turnbull opposition yesterday by pointing to the G20 communique’s pledge to “avoid premature withdrawal of stimulus”. But the Treasurer may not be as keen for the G20 to take up the International Monetary Fund’s rejection of his 4 per cent-plus economic-growth projections, or its assessment that Australia’s housing is up to 20 per cent over-valued.

Liberals can’t lose Dutton – Glenn Milne writes in The Australian that a decision by the pre-selectors of McPherson next Saturday will resolve whether Peter Dutton’s gamble in abandoning his seat of Dickson, outside Brisbane, to stand for McPherson, has paid off. For the sake of the Liberal Party, it had better.

Kevin Rudd gets credit for epic transition – says Greg Sheridan in The Australian. The replacement of the G8 by the G20 is an epic development in global politics, and it did not come about by accident.

Shift to G20 was matter of time – The Pittsburgh summit is a landmark event, writes Paul Kelly in The Australian, where US President Barack Obama conceded the relative shifts in global power against the US and the need for a new strategy of pragmatic multilateralism after the failure of Bush-era unilateralism. 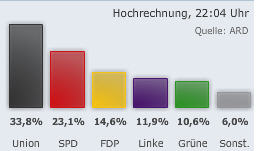 Merkel Wins German Election, Has Majority for Center-Right Government – German voters re-elected Chancellor Angela Merkel on Sunday and allowed her to ditch the center-left Social Democrats from her government and form a coalition with her preferred partner, the pro-business Free Democratic Party, instead, according to reliable projections – Der Spiegel

Big four prosper in a hard year – Three of the country’s big four banks will this week rule off one of their toughest years in a generation, but they should still turn in cash profits of $11 billion between them. In a showcase of the stark differences between banking in Australia and around the world, Westpac, ANZ and National Bank Australia will propel the total earnings made by the majors this year to more than $15.8 billion – Sydney Morning Herald

Australians back climate action – Three quarters of Australians believe that the price of fossil fuels should be increased to deal with climate change and 92 per cent believe a legally binding global climate deal is urgent and should be made at the conference to be held in Copenhagen in December. The project, Worldwide Views on Global Warming, had demographically representative groups of citizens deliberating in 38 countries, sending strong messages to their political leaders on the issue of climate change action – Sydney Morning Herald

War of words at SBS over Middle East – Conflict over Israel’s disputed territories has caused a skirmish about terminology at SBS, with the multicultural broadcaster accused of misleading viewers for directing that the term “Palestinian land” not be used in news reports about the Middle East – The Australian

Online ads to bounce back as slump ends – The Australian

Schoolkids exposed as asbestos found in ovals, sandpits – Children are being directly exposed to asbestos in schools, with debris resurfacing in school playgrounds, sandpits and ovals. The State Government has revealed the potentially deadly material may be part of “fill” used on their sites – Brisbane Courier Mail

Inner west on the boil but overall auction clearance rate dips – Anxious vendors mostly survived Super Saturday – the biggest auction day in the state’s history – but the clearance rate dipped to 62 per cent after its recent run of 70 per cent plus sales success. Sydney’s inner west remains the red-hot epicentre, with estate agents securing the sale of 79 per cent of the stock – Sydney Morning Herald

Grylls leads MPs’ creche push – Regional Development Minister Brendon Grylls, who has a pre-school aged child and another on the way, has led the charge, asking his fellow Nationals member and Legislative Assembly Speaker Grant Woodhams to investigate establishing a child-care centre within Parliament’s hallowed walls – The West Australian

Mr X tackles Woolies’ pokies – Shareholders of Australia’s largest pokie machine operator, Woolworths, are calling on the company to protect children from exposure to gambling. In a rare move, Senator Nick Xenophon has gathered the required 100 signatures to force the child-friendly motion on to the agenda at the annual general meeting, scheduled for November 26 in Sydney – Adelaide Advertiser

Thin blue line widens in park murder hunt – A man killed in Centennial Park at the weekend may have been the victim of a gay hate attack, police say – Sydney Morning Herald

Politicians a little elastic – It started with Kevin Rudd and his posse of young advisers, and migrated to the Labor backbench. Now it seems the Prime Minister’s inclination for wearing RM Williams boots to Parliament and other official events has crossed the floor. Elastic-sided boots have been spotted on several prominent Liberal frontbenchers in recent weeks, including Malcolm Turnbull and Tony Abbott – Sydney Morning Herald

Pressing zero beats business interactive voice systems and saves time and money – Despite dwelling at the bottom of the keypad, it has been revealed that the humble 0 is at the top of the dial pile when it comes to fighting the dreaded automated phone “services” – Sydney Daily Telegraph