A cash splash for politicians

Push for bank aid exit plan – The Rudd government is under pressure to bring its banking guarantees to an early end, now the banks are clearly out of danger and able to raise funds on their own – The Australian

Kevin Rudd spruiks merits of G20 to the UN – The Australian

Barnaby Joyce calls for Kevin Rudd to be paid $1million – Outspoken Senator Barnaby Joyce has called for Kevin Rudd’s salary to be almost trebled to $1 million as parliamentarians defended another pay rise. The Remuneration Tribunal’s decision to boost the base salary of federal politicians next week to $131,000 – an extra 3 per cent – comes just months after the Australian Fair Pay Commission refused to give 1.3 million workers on the lowest wage one cent extra – Brisbane Courier Mail

Politicians get a pay rise – Kevin Rudd’s freeze on politicians’ pay has ended, clearing the way for the nation’s 226 federal representatives to obtain a 3 per cent rise – their first in more than two years – Adelaide Advertiser

Corporate heavyweights enter the battle for Bradfield – The frontrunner for the Bradfield preselection, Paul Fletcher, has unveiled a list of more than 40 high-profile endorsements in a bid to see off his nearest rival, David Coleman, as the numbers tightened in the run-up to tomorrow’s preselection ballot – Sydney Morning Herald

Victims’ group wants new court protection – Defendants should be banned from court while their victims give evidence, to avoid intimidation during the trial process, the Victims Support Service says – Adelaide Advertiser

Please explain, envoy asks AFP on Balibo probe – Indonesia’s ambassador has asked the Australian Federal Police to explain why it is investigating the killings of five Australian-based journalists at Balibo nearly 35 years ago – Melbourne Age

Copenhagen isn’t the only place needing a grand climate deal – Michelle Grattan in the Melbourne Age writes that while the gung ho climate sceptics would be happy with an election any time soon, most in the Opposition, and especially marginal seat holders, are likely to put electoral caution first. At least, that will be what Turnbull is banking on when it comes to selling his amendments to the party room for the November Senate vote.

Time we realised our pollies deserve more than a cracker – writes Phillip Hudson in the Melbourne Age as he asks: Who will have the political mettle to clean up the way MPs are paid?

What a pile is this talk of reform – Richard Ackland in the Sydney Morning Herald writes that it’s funny how the expense of litigation keeps rising, the length of trials is steadily on the up and up, access to ”justice” is further away than ever and the gobbledegook increases.

Big step forward on climate treaty, but obstacles remain – is the verdict of Nicholas Stern writing in the Sydney Morning Herald

PM yearns to lead world on climate – Dennis Shanahan believes Kevin Rudd could solve the problem of the Coalition blocking his emissions trading scheme bill in the Senate almost instantly by simply agreeing to delay the vote from the end of November until the beginning of February next year. A relatively minor delay would kill much of the opposition in the Liberal ranks and ensure the passage of his Carbon Pollution Reduction Scheme bill, even if the Nationals split and continued to vote against it – The Australian

One-child policy aborting our growth – Dan Ryan writes in The Australian that the Department of Foreign Affairs and Trade has no view on whether China’s one-child policy is a good thing or a bad thing. This viewpoint needs to change. It is incoherent, it makes no sense economically, it poses long-term strategic risks to Australia and it tarnishes the otherwise good name our country has in sticking up for human rights across the world.

Grand vision, sound strategy – KIevin Rudd’s ambition for Australia and the G20 is vaulting. At one level it is almost absurd in its grandiosity. And yet it is sound. If it succeeds, it will put Australia at the institutional heart of global governance for the first time – Greg Sheridan in The Australian

Russia’s president pledges to help U.S. nudge Iran on nuclear issue – U.S. officials said they regarded Medvedev’s comments, after meeting Obama on the sidelines of the United Nations General Assembly, as a major shift in Russia’s position just a week before six major powers are to meet with Iranian officials in Geneva – Los Angeles Times

Obama wins passage of nuclear nonproliferation resolution at U.N. – The vote by the U.N. Security Council is the first step toward Obama’s goal of global nuclear disarmament – Los Angeles Times

Gulf states pitch in to help break Iran nuclear impasse – On the eve of Barack Obama’s plea to the world’s leading powers to sign up to an ambitious plan to control the spread of nuclear weapons, it has emerged that Gulf Arab countries will play a new role in the race to stop Iran’s nuclear program – Sydney Morning Herald 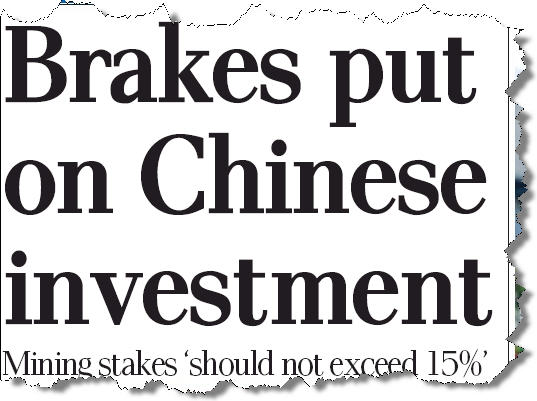 Station won’t ban Hunt – Yibbida, yibbida –the fat lady has not yet sung for Rex Hunt. – The larrikin football commentator looks set to stay at 3AW next year despite rumours his contract might not be renewed due to falling ratings – Melbourne Herald Sun

‘Crazy Noonga’ website sparks racism outrage – A website set up by a Perth student about a fictional Aboriginal character has been shut down and is being investigated by police amid racism claims. The website, which Radio 6PR reports was created by a 19-year-old Curtin University student, features audio excerpts of a character called “Nigel the crazy Noonga”, who prank calls businesses and fast-food outlets with a fake Aboriginal accent – Melbourne Age

Eels’ hopes come from on high – Not since Lazarus has there been such an unlikely back-from-the-dead tale. So it should come as no surprise that a helping hand is guiding Parramatta’s amazing run toward the NRL’s highest prize. The Eels ascension to tonight’s preliminary final against the Bulldogs has been blessed by two of the most influential figures in Australia’s fastest growing church, Hillsong – Sydney Daily Telegraph

Sellers put grand final bogy to test – It may not sound like many, but the 137 Melbourne homes for auction this weekend represent a record for grand final day. But old real estate conventions and the market are being transformed by government stimulus measures, the first home buyer grants and relaxation of foreign investment laws. This weekend will be the last before grants are scaled back – Melbourne Age

Boot Brendan Fevola out – Melbourne Herald Sun editorial tells the footballer “You deserve to be dumped by the Carlton Football Club for years of drunken behaviour that even for you went over the top at the Brownlow Medal night at Crown.