Nerd-in-chief Kevin is Bill’s celebrity pick – Former US president Bill Clinton has heaped praise on the Australian Prime Minister’s grey matter in front of an audience of 400 celebrities and world leaders. ”In my opinion, he is one of the most well informed, well read, intelligent leaders in the world today,” Mr Clinton said – Melbourne Age

Tripodi pushes grant for ALP man – The NSW Finance Minister, Joe Tripodi, intervened to encourage another minister to reinstate a $46,000 grant for a Fairfield community organisation after he was lobbied by a former Labor staffer he has known for more than a decade – Sydney Morning Herald

PM pushes Obama to back global shake-up – Kevin Rudd wants a radical overhaul of the bodies that set policy in the global economy – and in an unusually frank address, he calls for the US President, Barack Obama, to step up and drive the changes – Sydney Morning Herald

Keep stimulus rolling: Treasury – Treasury boss Ken Henry has weighed into the debate over the future of the economic stimulus programs, declaring that cutting them – as proposed by Opposition Leader Malcolm Turnbull – risks stalling the economic recovery and pushing workers out of jobs – Melbourne Age

Recovery could stall: Ken Henry – Ken Henry has warned Australia’s economic recovery is not yet assured and would come to a standstill if the Coalition succeeded in curbing the Rudd government’s stimulus spending – The Australian

Survey shows we’re all happier at home – Australians have coped with the economic slowdown by staying home, chilling out and saving money – and we’re all the happier for it. That’s the finding of the second annual happiness survey by marketing research consultancy The Leading Edge – Adelaide Advertiser

Tougher sentencing for child sex offenders – More child sex offenders will face a maximum 25-year jail term in Victoria under tougher sentencing laws to be introduced by the State Government. The Sentencing Advisory Council will today release a report recommending that the maximum penalty should be extended to offenders who sexually penetrate victims under 12. Currently the maximum applies only when the victim is under 10 – Melbourne Age

Rape at care homes alleged – Vulnerable women in state-monitored care homes are reportedly being raped and are trading sex for cigarettes and money in cases that highlight years of neglect and inaction by the State Government, according to its own watchdog. The Public Advocate, Colleen Pearce, says Victorians would feel ”ashamed” if they visited some Government-monitored private nursing homes – Melbourne Age

Motorist speed survey alarming – Almost two-thirds of motorists say they have exceeded speed limits by at least 10km/h in the past six months, according to a new WA Police survey – The West Australian

Minister ‘must accept’ God role – The Immigration Minister’s refusal to ”play God” is leaving life or death deportation decisions in the hands of inconsistent officials, a refugee advocate with 30 years’ experience in immigration says – Melbourne Age

I had no power, laments Haneef inquiry chief – The chairman of the inquiry into the Haneef affair says he did not have enough power to establish whether the case involved a political conspiracy – Melbourne Age

New boatload has Christmas Island at ‘breaking point’ – Another boatload of 100 asylum-seekers has arrived on the Indian Ocean outpost of Christmas Island, sparking renewed claims that the Rudd government’s border protection policy is in tatters and the controversial offshore detention centre is at breaking point – The Australian

Jury in on heroin ban – Alex Wodak writes in the Melbourne Age that if we want to help drug users,  prescribing heroin should be part of the treatment.

Blowing the dust of wacky Wong stunts – Piers Akerman in the Sydney Daily Telegraph says the dust-storm-that-ate-Sydney has nothing on the bulldust storm Kevin Rudd’s Labor Government has generated on climate change.

Obama urges ‘new spirit’ on shared goals – The US has embarked on a new era of global engagement but fixing the world’s problems cannot be “solely America’s endeavour” President Barack Obama has warned the world, in a blunt first speech to the United Nations General Assembly overnight – Melbourne Age

Heartbeat faint for climate change patient – Shaun Carney in the Melbourne Age says the one-day UN run summit was Secretary-General Ban Ki-moon’s attempt to shock the process back into life. Did it work? It looks like it did, but the heartbeat is faint. If this is as good as it gets, then Copenhagen is still likely to be a bust.

Hu’s UN statement falls short – Lenore Taylor in The Australian writes that China – the world’s biggest greenhouse gas emitter – emerged from this week’s United Nations meeting looking like the climate change “good guy” even though President Hu Jintao’s commitments did not quite live up to expectations.

Pass the climate parcel – Kevin Rudd is proposing a “grand bargain”, Chinese President Hu Jintao has proposed per capita emissions cuts and Indian Environment Minister Jairam Ramesh is celebrating proposed domestic legislation for emissions targets. Their statements aren’t about securing agreement but laying the foundations of blame for when the December Copenhagen meeting collapses in attempting to replace the failed Kyoto Protocol. Tim Wilson in The Australian

Court papers reveal lobbyist’s secret fee bombshell – Trinity paid lobbyist Ross Daley a secret $1 million fee “by mistake” after he allegedly misled the then chief executive of the company, Ben McCarthy, according to court documents. Trinity claims Mr Daley had convinced Mr McCarthy he could influence the decision-makers at Sunsuper to invest in the company – Brisbane Courier Mail 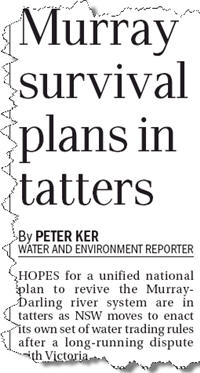 Murray plans in tatters – While the NSW and the Commonwealth hailed the deal as a boost for the environment, green groups claimed it was a step backwards for the river – Melbourne Age

Major Murray water sale – A deal with NSW will deliver 890 billion litres more water for environmental flow down the River Murray, including the Lower Lakes. NSW farmers will be able to sell their water entitlements to the Federal Government, which will return the water to the Murray-Darling Basin system and its wetlands – Adelaide Advertiser

NSW lifts embargo on buying back Murray water rights – Only months after slapping a ban on further sales of water rights to the Federal Government aimed at boosting water flows to the Murray-Darling Basin, the State Government has backed down and reached agreement on additional sales – Sydney Morning Herald

Air-quality readings go ‘off the chart’ – The Australian

Coalition digs in on climate change – The Coalition is seeking to recast itself as the good guy in emissions trading negotiations, saying the Rudd government had pulled a stunt by setting a deadline for proposed changes to the laws – Brisbane Courier Mail

Praise for China and Japan on emissions – Kevin Rudd has praised new offers from China and Japan on cutting greenhouse gas emissions before the Copenhagen climate change conference, but he has given limited approval to the offering by US President Barack Obama – The Australian

Hu steals Obama’s climate thunder – though he is relatively new to the international stage, Barack Obama is not accustomed to being overshadowed by another world leader. It happened yesterday as Chinese president Hu Jintao stole the show with a powerful speech to the UN General Assembly in New York on how to tackle climate change – The Australian

After the dredging – As as the dredging Port Phillip Bay project draws to a close, what remains unclear is how much those changes actually matter. Dredging proponents, the Port of Melbourne, believe the changes caused by shifting almost 23 million cubic metres of silts have not significantly damaged the bay’s environmental health – Melbourne Age

Push for an outsider as Fairfax chairman – Major shareholders are refusing to accept Roger Corbett’s ascent to the chairman’s role at Fairfax Media as a fait accompli, arguing that the company would be best served by an external candidate – The Australian

Walker has no regrets over stint at media helm – “I sold The Age at (inner-Melbourne) Richmond station in my young days, and I’ve been associated with The Age for all these years. If we’d done nothing, and I’d been the kind of chairman who simply chairs meetings, goes into the office once a month and signs the board minutes, then this company wouldn’t be alive today.” – The Australian

Battle to open 600-patron bar – Melbourne bar owner Jerome Borazio, the man behind St Jerome’s bar and laneway festival, is fighting a decision by liquor authorities to stop him opening a new venue capable of holding up to 600 people – Melbourne Age

Whip rule: hits now up to riders – The Australian Racing Board announced yesterday that, instead of restricting jockeys to seven hits in the final 100 metres, jockeys would be allowed to use the whip as many times as they wanted. ”Today, the ARB has voted to increase animal cruelty,” said RSPCA chief executive Heather Neil – Melbourne Age