Rudd’s emissions trading back flip as media concentrates on gowns

PAGE ONE OF THE MORNING PAPERS

Treasury figures land Rees in hot water over jobs claim – The Premier, Nathan Rees, will be accused today of misleading Parliament after the head of Treasury revealed his claim that the Government’s $62.9 billion infrastructure program will create 160,000 jobs is wrong – Sydney Morning Herald

Stimulus package jobs cost $1.5m each – Academics lined up yesterday to rate the Rudd Government’s big-spending effort to ward off recession as part of an inquiry examining the effectiveness of the stimulus and whether it should be curtailed – Brisbane Courier Mail

Voters back ETS but not early election: Newspoll – The Australian

The Newspoll numbers – The Australian

Proud to be gay, the Liberal with an eye on the safest of seats – One of the favourites to win Liberal preselection for Brendan Nelson’s seat of Bradfield has candidly addressed the issue of his homosexuality and won plaudits for doing so from senior Liberals as well as his mother – Sydney Morning Herald 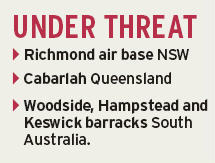 Last post for bases as Defence sits on report – A report that identifies up to $18 billion in military savings has canvassed the closure of military bases, but the Defence Force has refused to release details, saying it may cause “unnecessary speculation and anxiety” – Sydney Morning Herald

China ‘wrongly’ defined as threat – Dr Zhang Chun, a research fellow at the Shanghai Institutes for International Studies, is one of several regional experts giving their country’s reactions to the defence white paper for the Australian Strategic Policy Institute – Melbourne Age

Women sacked over leave – Women are being sacked for taking maternity leave, and told to quit if they can’t juggle family and the work roster, the Fair Work Ombudsman’s office has found – Melbourne Age

Bring back trams: mayor makes a pitch for Anzac Parade – The mayor of one of Sydney’s highest density municipalities has backed the introduction of light rail along Anzac Parade to serve one of the country’s biggest universities and a host of health and recreational sites – Sydney Morning Herald

Hansonite protest out of left field – Malcolm Colless in The Australian believes signs of community concern over Chinese influence on Australian living standards are shaping up as a key domestic issue for the Rudd government as it struggles to mend its already strained relations with China.

Greed is God again, and we have learned nothing – Peter Hartcher in the Sydney Morning Herald writes how, after a near-death experience, the world financial system is returning to business as usual – only worse.

Rudd avoids jobs for mates – Gerard Henderson in the Sydney Morning Herald finds, along with some bipartisanship in appointments, a vindictiveness in Kevin Rudd and some of his ministerial colleagues in dealing with opponents.

The world is relying on the G20 leaders to find a way back to economic stability – Tim Colebatch in the Melbourne Age on how the economic crisis has converted the G20 into the closest thing we have to a boardroom meeting on the global economy. That’s good. A global economy, now and in future, demands a global board, and a global executive. The G20 provides half of that, and it’s reasonably representative.

Failure looms in Afghanistan war – Australia is unlikely to send more troops to Afghanistan despite a blunt assessment by the top United States and NATO commander in the field, General Stanley McChrystal, that unless more forces are provided, the war will ”likely result in failure” – Melbourne Age

Sex, scandal and spies as Sarkozy smear case begins – The former French prime minister Dominique de Villepin lashed out at his rival Nicolas Sarkozy as he went on trial yesterday on charges of plotting to smear the French President – Sydney Morning Herald

Unless we all act together on climate change, everyone loses – Marian Wilkinson in the Sydney Morning Herald points out the alarming fact that yjr world is now collectively planning to build so many coal-fired power stations over the next 25 years that their lifetime carbon emissions will equal the total of all the human coal-burning activities since the beginning of the industrial revolution.

Hard men reign in Packer’s dream city – John Garnaut in the Melbourne Age visits Macao and learns how the punters are attracted.

Sky’s the limit for high flyers – The global financial crisis has failed to significantly dent the pay cheques of some of Australia’s highest-profile corporate leaders such as the former Qantas boss Geoff Dixon, setting the scene for a season of shareholder outrage over executive pay – Sydney Morning Herald

Price crash foils Rio’s aluminium plans – Aluminium prices continue to be unkind to Rio Tinto, forcing the group to rely on smelter closures, cost-cutting and asset sales to limit the continuing damage from its ill-timed $US38.1 billion acquisition of Canada’s Alcan in 2007 – Melbourne Age

Rudd switches tack on emissions legislation – Prime Minister Kevin Rudd has undermined his own argument that his emissions trading legislation must be passed before Copenhagen, admitting its defeat has not hampered his role in international climate-change talks – Melbourne Age

Byron Bay owners can defend castles in the sand – Reality has mugged Byron Bay’s Greens-dominated council, after the NSW government told it to reconsider two controversial policies that stop homeowners building seawalls to protect their properties, and renting homes out during holidays – The Australian

Baby left in care of rapist – Child protection authorities allowed a baby girl to live with her heroin-addicted mother and a convicted rapist for six weeks, the Victorian Department of Human Services has admitted – Melbourne Age

Legalise addicts’ heroin: experts – Australian doctors should be allowed to prescribe heroin to long-term addicts to prevent fatal overdoses, crime and the spread of blood-borne viruses, leading addiction specialists say. Dr Alex Wodak, director of the alcohol and drug service at Sydney’s St Vincent’s Hospital, called for Canberra to investigate whether long-term addicts who fail rehabilitation programs should be given a last-resort option of receiving the drug on prescription – Melbourne Age