The pick of Monday morning's media.

It’s a jump to the Left, then a step to the Right – The layout of Kevin Rudd’s ministerial wing reveals a lot about Labor’s power base, writes Mark Davis in the Sydney Morning Herald. The nearest thing to a Rudd Government inner sanctum isn’t the cabinet room but a select cluster of offices fanning out from the Prime Minister’s suite in Parliament’s ministerial wing.

Rudd lets the F-word slip – Kevin Rudd says he makes no apology for dropping the F-bomb during private meetings with his Labor colleagues. The PM is reported to have let rip a fortnight ago with an expletive-laden tirade at Labor factional bosses who complained about his plans to slash MPs’ printing allowances from $100,000 to $75,000 a year – The West Australian

KRude hits target with F-bomb blitz – Katharine Murphy in the Melbourne Age writes how apparently the potty-mouthed PM, or Kevin Rude as he is known on such occasions, had been at it again, shocking one group of Fs with his own singular, mega F-offensive. The shocked Fs were those most delicate of flowers, faction chiefs (FCs) – a group known for being prone to fainting fits.

Unions say 1000 jobs to go in hospital purge – The NSW Health Department’s voluntary redundancy program for public hospital workers is shaping up to be the state’s largest purge of nurses, therapists and other health workers, with about 1000 jobs expected to go, unions say. Despite severe workforce shortages, the department has been calling for massive redundancies to compensate for its $646.6 million budget blowout – Sydney Morning Herald

Cashed up council bosses – Local government chief executives in the past year have been awarded average pay rises of 7 per cent or up to $75,000. The state’s 19 metropolitan council CEOs are on average salary packages of more than $220,000. One is even paid more than Prime Minister Kevin Rudd – Adelaide Advertiser

Terror fear hits trip – Premier John Brumby, who leaves today on a trip designed to repair the fractured relationship between Victoria and India, has cancelled the Mumbai leg due to terrorism fears – Melbourne Age

Is street violence etched into the national character? – A ready tendency to resort to fisticuffs is, alas, nothing new writes Geoff Strong in the Melbourne Age

Partisan campaign, says PM’s Lib pal – Brendan Nelson says he will run a partisan campaign to assist his Liberal successor in the Sydney electorate of Bradfield despite being Kevin Rudd’s ambassador designate to the European Union – Melbourne Age

Defunct cab body costing millions – A government-run taxi committee has spent more than $7.6 million since it was officially dissolved five years ago when it was found to be riddled with budget problems and conflict of interest – Sydney Morning Herald

Passengers queue up for trams that do not arrive – Melbourne’s trams are being ”short-shunted” – their journey terminated before they reach their destination – 150 times a day, leaving passengers at the end of the line waiting for trams that never show up – Melbourne Age

Rudd finally out of the blocks on micro reform – Ross Gittins in the Sydney Morning Herald goes Hallelujah! After almost two years in office, Kevin Rudd has at last made his first foray into microeconomic reform with his plan to break up Telstra, splitting it off from its network monopoly.

Liberals rewrite an inclusive past – Liberal Senator George Brandis is reaching back beyond the founder of the Liberal Party Sir Robert Menzies to claim eight of the nation’s non-Labor political leaders as its own, and all they stood for – Phillip Coorey in the Sydney Morning Herald

Island faces rising tide of regulation – Paul Sheehan visits Lord Howe Island for the Sydney Morning Herald and finds the dark side of the environmental movement, the uncompromising, didactic, self-important side. Religious zeal may be on the wane in our society, but the impulse towards crusading, evangelistic certainty is not.

Protection racket is bad policy – Kenneth Davidson in the Melbourne Age is a Telstra defender. The Federal Government is essentially trying to blackmail the company and benefit its competitors which are basically marketing and billing organisations.

German poll a battle for second spot and Merkel’s favour – The runner-up will likely end up the junior partner in a coalition with the Chancellor’s Christian Democrats, writes Paola Totaro in the Sydney Morning Herald

George in a spin over noisy wind power – While Kevin Rudd was pushing global solutions for climate change in New York at the weekend, in NSW the battle between wind farms as planet-saving sources of renewable energy and residents who say they destroy rural life is coming to a head – Sydney Morning Herald

Rudd pushes climate change treaty – Australia’s behind-the-scenes work on the legal framework for a new climate change treaty, and ways to finance poorer countries’ efforts to adapt to a low-carbon world, could become a crucial contribution in breaking the impasse on a greenhouse treaty – Sydney Morning Herald

Right-to-die quadriplegic passes away – Perth quadriplegic Christian Rossiter has died after succumbing to a chest infection, five weeks after a court granted him the right to refuse food and water. Mr Rossiter, 49, died in a Perth nursing home early on Monday morning, his brother Tim Rossiter said in a statement – The West Australian 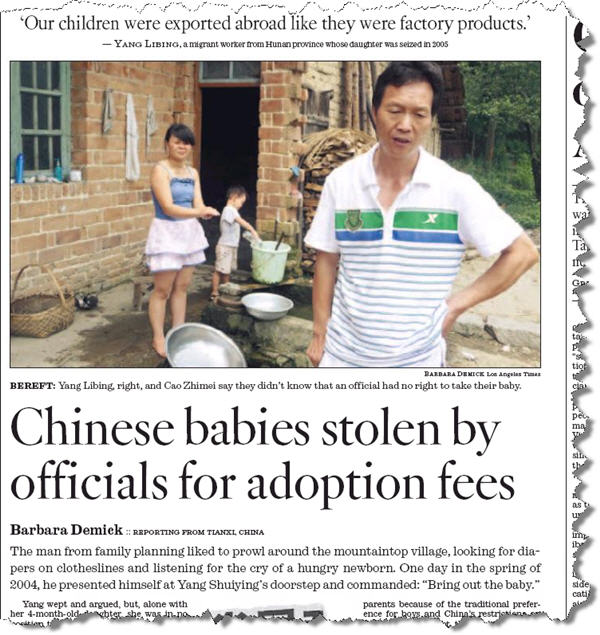 Chinese babies stolen by officials for foreign adoption – In some rural areas, instead of levying fines for violations of China’s child policies, greedy officials took babies, which would each fetch $3,000 in adoption fees – Los Angeles Times

No more suffering in silence as Rudd urges action on depression – The Prime Minister, Kevin Rudd, has called for depression to be ”brought in from the cold” and regarded in the same way as any other medical condition after the decision by a senior Liberal MP to take leave of absence from the Opposition frontbench – Sydney Morning Herald

Open-door morgue leaves bodies up for grabs – Security at one of Sydney’s biggest hospitals is so lax that anyone can walk into the morgue and claim a body without showing identification, prompting fears that corpses could be wrongly removed or defiled. – Sydney Morning Herald

Record number of properties for auction – Estate agents have about 670 properties listed for auction next Saturday, a record volume since weekend sales compilation began more than two decades ago. Sydney’s previous busiest weekend was when 570 houses and units were listed on a March 2007 weekend – Sydney Morning Herald

Children must see dad, like it or not: Family Court – The Australian