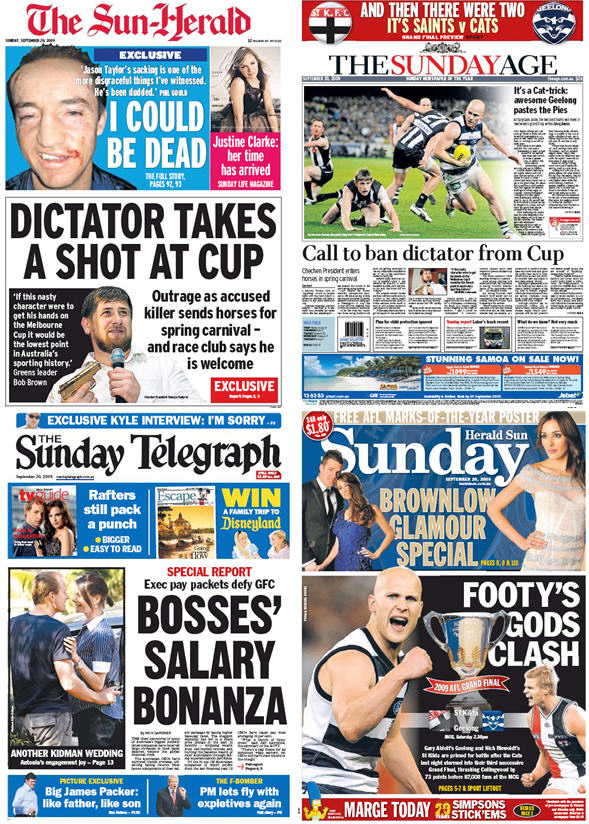 Senior liberals attack rebels – Senior liberal frontbenchers are urging Malcolm Turnbull to publicly stand up to Nationals renegades such as Barnaby Joyce – even if it means the Coalition formally splits. The senior shadow ministers are also demanding Mr Turnbull act against maverick Liberal MP Wilson Tuckey, even suggesting he be expelled from the party – Melbourne Sunday Herald Sun

It’s Isobel Who? as voters shun Libs – Labor has cemented an overwhelming 12-point lead over the Opposition amid voter confusion about who is leading the Liberals into the March 20 election. Premier Mike Rann’s team is on track to win the election – six months from this weekend – without losing a seat if the Government’s 56 to 44 per cent lead revealed in the authoritative Sunday Mail poll is maintained – Adelaide Sunday Mail

Runours abound that Peter Costello may quit politics – Speculation is mounting that former Treasurer Peter Costello may soon quit Parliament, following in the footsteps of former Coalition leader Brendan Nelson. Some say he could retire in time for a by-election in his seat of Higgins to coincide with the by-election in Dr Nelson’s seat of Bradfield – setting up a so-called “Super Saturday” electoral test for embattled Liberal leader Malcolm Turnbull – Brisbane Sunday Mail

ALP turning on itself: Libs reveal NSW poll strategy – NSW Labor MPs desperately seeking re-election in 2011 will be allowed to campaign against their own government in order to portray themselves as Aussie battlers fighting for their constituents. That’s the view of Liberal Party masterminds who have prepared a bloody campaign battle plan based on international strategies – Sydney Sun Herald

The good, the bad and the chronically late – Labor made big promises before being elected in 1999. Reid Sexton in the Melbourne Sunday Age investigates what happened to them. 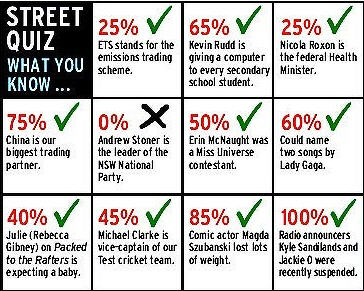 Celebrities, yes, but politics? Don’t ask – Stress, celebrity worship and rising complacency are fuelling a growing political ignorance. A nationwide Nielsen newspoll last week revealed only 5 per cent of voters knew Warren Truss was the federal National Party leader, a far cry from the days when Tim Fischer held the post. And a snap poll by The Sun-Herald on Friday confirmed fewer people – across age groups – could correctly answer political questions than popular-culture questions about actors, models and sporting figures – Sydney Sun Herald

Australia: where the poor are poorer – Australia’s unemployed are experiencing poverty at a far higher rate than the unemployed in other developed nations – Melbourne Sunday Age

The right to know

Our bid to give school results – The Sydney Sunday Telegraph promises a campaign to deliver basic information about the performance of their children’s school even if it results in prosecution and a hefty fine.

How NSW spends $4 on patients’ food – Meals served in hospitals across NSW contain $4 worth of food and drink. About 22 million meals are served each year for a total food and drink cost of $88.56 million and the State Government wants to slash another $16.5 million from the budget – Sydney Sunday Telegraph

Labor’s women MP record an illusion – Piers Akerman in the Sydney Sunday Telegraph writes that in the in the cacophony of splenetic hyperbole that passed for question time under the Rudd Labor government, the irony of the appointment of 32-year-old Kelly O’Dwyer went unremarked as did the fact that she had soundly beaten a 53-year-old millionaire businessman, Andrew Abercrombie, and that her successful nomination for Higgins made her the first women to be preselected by the party for a safe seat in Melbourne.

All a boy could want – Josh Gordon in the Melbourne Sunday Age writes that the Liberal Party has already given Kevin Rudd all the presents he needs on his birthday. 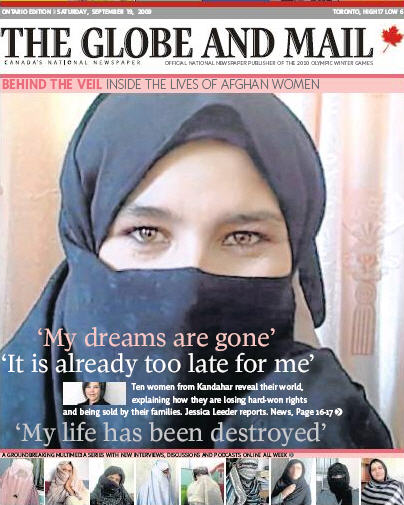 Behind the veil – an intimate journey into the lives of Kandahar’s women – “Many women in public life have been forced to curtail their activities or abandon their jobs, lacking confidence that the authorities are able or willing to provide them with protection,” declared a report by the United Nations High Commissioner for Human Rights released earlier this year. “The Government is failing to adequately protect the rights of women in Afghanistan despite constitutional guarantees and its international obligations,” the high commissioner charged, warning, “Important gains made recently by women in the public sphere are in danger of receding.” Globe and Mail, Canada

‘Stalin’ prepares runners for Melbourne Cup – Chechnyan President Ramzan Kadyrov – who was described as ”a new Stalin” by a journalist weeks before she was assassinated – is preparing the gelding Mourilyan for the Melbourne Cup and the stallion Bankable for the Mackinnon Stakes, which is run on Derby Day. The Greens leader Bob Brown demanded that Prime Minister Kevin Rudd ”intervene and do all he can to stop him and his horses from coming” – Sydney Sun Herald

Dreams turn to dust in Dubai – Two Australian businessman are trapped in a legal hell, writes Taghred Chandab in the Sydney Sun Herald

Movers and shakers engulfed by a desert storm – Dozens of projects remain unfinished, and many others were shelved, including the Donald Trump hotel – Sydney Sun Herald

Crisis-proof pay packets for bosses – It’s been the worst year for the global economy since the Great Depression. But while millions of Australians have either lost their jobs, seen wages frozen or been forced to work fewer hours to cut wage bills, the bosses of some of our biggest companies have helped themselves to double-digit hikes of their base salaries – Sydney Sunday Telegraph

LabRat lines up for Kyle Sandilands’ radio gig – Jason “LabRat” Hawkins, breakfast host for Brisbane station B105 FM, has been favourably compared to Sandilands and in 2007 the popular and tenacious LabRat was despatched to Brisbane to help turn around the fortunes of embattled sister station B105. In partnership with a panel of two, he has enjoyed some success – Sydney Sunday Telegraph

School mums’ fashion war – Fierce style battles are being waged between Queensland mothers during the daily before and after-school drop-off. The couture clash is played out by the “slummy mummys” in their pyjamas and tracksuit pants, and the “yummy mummys” who turn up in designer denim and expensive sunglasses – Brisbane Sunday Mail

Victoria’s homes bonanza – Victoria’s property market has passed its biggest test of 2009, prompting claims the “boom is back”. Real Estate Institute of Victoria figures show 648 of 790 reported auctions resulted in home sales yesterday – a clearance rate of 82 per cent and more than any other Saturday this year – Melbourne Sunday Herald Sun

Cafes hounded by dog of idea – Dog owners who stop for a cappuccino on their morning walk on Sydney’s lower north shore could face fines of $330 under a council crackdown. Two NSW laws prevent dogs from being within 10m of a food consumption or preparation area, but not one Sydney council enforces the discretionary rule. Mosman Council is moving to fine both cafe and canine owners if they breach the Companion Animals Act 1998 and the Food Safety Act 2003, after receiving “a few” complaints from residents – Sydney Sunday Telegraph

Unqualified undertakers working out of their loungerooms – Self-declared undertakers with no qualifications or experience are setting up shop in their lounge rooms to cash in on the lucrative funeral industry. Major Queensland funeral companies say they are alarmed that new cut-price operators are able to collect bodies from hospitals and nursing homes, and to arrange burials and cremations because there is no government regulation. Anyone can register a business name, call themselves a funeral director and trade – Brisbane Sunday Mail

Is it a bird? Is it a plane? No, it’s super broccoli – Rather than changing our eating habits, scientists are supercharging our food, writes Peter Munro in the Melbourne Sunday Age