Words of praise from the OECD

Nationals turn on Malcolm Turnbull with support not guaranteed – Senior Nationals have warned Malcolm Turnbull he can no longer take their support for granted, strongly attacking his “contempt” for their outright opposition to carbon emissions trading – The Australian

Nelson’s last word: principles first – Brendan Nelson has bowed out of politics with a final plea to his party to avoid doing a deal with the Government over climate change until next year when the intentions of other nations might be known – Sydney Morning Herald

Rees readies for 2011 election wipeout – Labor is believed to have begun secret polling in safe Sydney seats over new fears the State Government’s appalling standing may trigger a voter tsunami, wiping out up to 70 per cent of its Lower House seats in the 2011 election – Sydney Daily Telegraph

Bligh says husband works hard ‘because he has less hair’ – Premier Anna Bligh has been forced to defend the performance of her bureaucrat husband, insisting the amount of hair her man has lost proves he is a hard worker – Brisbane Courier Mail

Nelson calls for decency in emotional farewell speech – The Australian

The real story behind my earring: Brendan Nelson – The valedictory speech in full – Melbourne Age

Stimulus to be felt for decade, says OECD – Australia’s economic stimulus package is delivering a bigger boost to employment than those of any other advanced country and the benefits could be felt for up to a decade, according to the OECD – The Australian

$75,000 for school about to close – A Spencer Gulf school facing closure at the end of this year has been awarded $75,000 to upgrade its buildings as part of the Federal Government’s stimulus program – Adelaide Advertiser

Car grants to stay secret – Australia’s car companies will be spared having confidential details of their taxpayer subsidies revealed, after the Opposition gave in to government and industry pressure – Adelaide Advertiser

FOI report reveals culture of secrecy– Premier John Brumby is facing a potentially damaging pre-election investigation into government departments preventing the release of documents under freedom of information, following a scathing report by the Victorian Ombudsman. The report, tabled in Parliament yesterday, revealed a culture of secrecy, with departments acting to restrict rather than release information under FOI laws – Melbourne Age

Revealed: chief’s meetings with Richo – The head of the NSW Planning Department, Sam Haddad, met the controversial Labor powerbroker Graham Richardson four times over the past year and spoke with him on the phone but did not inform his minister, Kristina Keneally. Ms Keneally told a parliamentary committee yesterday it was not his job to tell her which lobbyists he met; he simply advised on decisions – Sydney Morning Herald

Retailers under fire over website – The country’s most powerful retailer lobby group scuppered Prime Minister Kevin Rudd’s election promise to force grocery prices down, a government inquiry has been told – The Australian

Unions declare war on BHP Billiton and on each other – Industrial tensions have escalated in the resources sector, after unions declared “open season” on BHP Billiton over the 51per cent pay rise granted to chief executive Marius Kloppers, and a brawl ignited between unions over coverage of workers at the massive Gorgon LNG project – The Australian 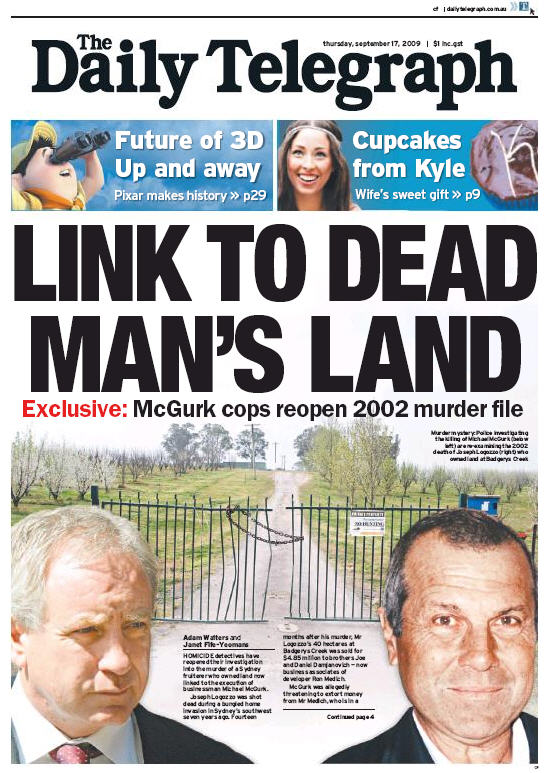 NSW MPs deny meeting McGurk – All 70 NSW Labor MPs have denied meeting or speaking with Michael McGurk, despite claims that five of them had been secretly recorded in conversations with the slain standover man. The Australian contacted each of Labor’s State MPs and all of them declared they had neither met nor spoken with McGurk.

Brumby faces tougher Indian mission after ‘racist’ attack – The bashing of four Indian men in Melbourne has reignited simmering tensions in India, and Victorian Premier John Brumby has conceded it will make his mission to repair relations more difficult – The Australian

Hardline MPs are boxing Turnbull in on ETS rejection – Lenore Taylor writes in The Australian that Malcolm Turnbull has been quite clear that he thinks it would be futile — both in political and policy terms — to give the government an excuse to hold an early double dissolution election triggered by Coalition rejection of the emissions trading laws. But a determined minority in his own party is making it harder and harder for him to avoid one.

PM’s neo-liberal ETS is calamitous – Former National Party Leader John Anderson warns in The Australian that if The Nationals are left alone on the other side of the chamber on the ETS, it would be a historic breach of trust with seven million regional Australians. It would so damage the Coalition contract with Australia that it might never be mended.

Interest rates on their way up – Allan Wood in The Australian

Brumby must explain fire-prevention delays – Paul Austin in the Melbourne Age outlines how the Government failed to act on bushfire readiness despite warnings over many years.

Career that had a certain earring about it – Tony Wright as the Goanna in the Melbourne Age reflects on a retirement.

Reshaping of Japan begins – Yukio Hatoyama has been sworn in as Japan’s Prime Minister, launching a struggle to impose a new political and administrative order on a country dominated for more than 50 years by the Liberal Democratic Party and its conservative constituencies – The Australian

Telstra rebounds as its fate is reviewed – Telstra could benefit from the government’s regulatory assault — particularly if it co-operates with the national broadband network — experts declared yesterday, as the market dramatically reversed its verdict on the impact of Canberra’s plans to break up the industry giant – The Australian

Telstra tells shareholders it will stay a ‘cornerstone’ – Melbourne Age

Friendless telco will have to act quickly – While Telstra bunkered down yesterday as it grappled with the biggest shake-up since privatisation, Communications Minister Stephen Conroy was telling all who would listen that the regulatory reform was a ”win-win” situation – Melbourne Age

Small miracles for Malcolm Turnbull – One of the more painful chapters in the lives of Malcolm and Lucy Turnbull, the miscarriage of two children, was played out in private more than 20 years ago. Yesterday, their story became part of a more public retelling of the effects of losing a child, as a contribution to a new book raising money for families confronted with stillbirth, miscarriage and premature birth – The Australian

Gambling addicts set own bet limit – Problem gamblers will set their own limits in an expanded statewide trial running across 16 venues in SA. Two commercial groups are running pre-commitment programs that encourage people to specify their maximum losses or time limits on their gaming – Adelaide Advertiser

Grylls sees NW towns as cities – The North-West industrial towns of Karratha and Dampier will be transformed into modern cities with marinas, high-rise apartments and cappuccino lifestyles if Regional Development Minister Brendon Grylls gets his way. The West Australian