Turnbull hit with rebellion over ETS – Turnbull’s shaky leadership took another heavy blow yesterday when he was confronted with a partyroom rebellion over his position on climate change. Retiring Liberal Brendan Nelson sparked the discord with an impassioned valedictory address in which he begged colleagues to “stand for something” and urged them to reject Kevin Rudd’s proposed emissions trading scheme – The Australian

Backbench warns Turnbull over emissions accord –  Malcolm Turnbull faces a revolt on emissions trading, with members of the Coalition warning him against striking a deal with Labor before the Copenhagen conference – Melbourne Age

‘Mamma mia, you know too much’ – Tripodi mate linked to Medich deal – The Sydney Morning Herald reports that the fallout from the murder of standover man Michael McGurk is edging closer to the State Government.One of Labor minister Joe Tripodi’s closest friends and a director of his private company has taken out an option on a block of land at Badgerys Creek earmarked for rezoning by the Government.The 37-hectare rural block is only one paddock away from another block owned by the developer Ron Medich.

Ex-Liberal minister joins sexism outcry – Former minister Fran Bailey says those in her party who have allegedly waged a sexist campaign against the woman expected to succeed Peter Costello in the plum seat of Higgins are troglodytes. The blast came after question time yesterday was dominated by a fight over women in politics, in which the Coalition moved to gag two female ministers – Melbourne Age

Call to extend nursing home bonds – The prospect of high-care nursing home patients being required to pay accommodation bonds of more than $180,000 has been raised by the Productivity Commission

AG bid to bend gender ruling – Attorney-General Christian Porter has launched an appeal against a landmark ruling that two female-to-male transsexuals could be considered men, despite them still having internal female reproductive organs – The West Australian 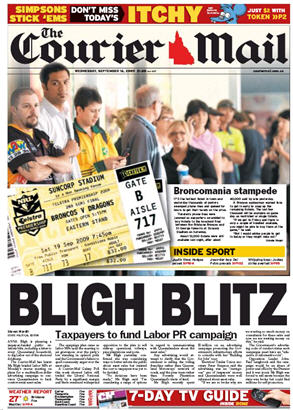 Taxpayers to fund Anna Bligh’s PR campaign – Premier Anna Bligh is planning a taxpayer-funded PR blitz, including a letter to every Queensland household, to dig Labor out of the electoral doldrums – Brisbane Courier Mail

Obstetricians double fees – Obstetricians have more than doubled the amount they charge pregnant women to manage their pregnancy in the last five years as they milked a new taxpayer-funded Medicare Safety Net which has turned them into millionaires. A Government attempt to try and cap further rises and save taxpayers $194 million is in danger of being blocked by the Senate – Brisbane Courier Mail

Brimbank City Council sacked by State government – Intimidating parking inspectors, leaking of confidential council information and attempts by councillors to influence outside organisations led to the sacking of the disgraced Brimbank City Council. In a dramatic intervention, the State Government appointed administrators to run the ALP-dominated western suburbs municipality, leaving the more than 170,000 residents without any elected representatives until 2012 – Melbourne Herald Sun

Moore vows to codify transport blueprint – Sydney’s Lord Mayor will try to enshrine any new public transport plan into law, with a guaranteed budget and construction timetable, to ensure the projects are delivered – Sydney Morning Herald

University staff to strike over casuals, pay rise – Brisbane’s three universities will be hit by a 24-hour strike as unions attempt to wipe the Howard-era conditions from their enterprise agreement – Brisbane Courier Mail

Insulted watchdog John Lloyd snaps: no quota system on construction crackdowns – industry watchdog John Lloyd has criticised the Rudd government over its handling of his future, with taxpayers facing a $115,000 compensation payout if he departs before his contract expires next year – The Australian

NT public servants’ pay freeze – Public servants will have their wage increases capped at 2.5 per cent as part of the NT Government’s attempt to rein in spending in the wake of the global financial crisis – Northern Territory News

Online register created for executive Aboriginal positions – An online register has been established to get more Aboriginal people to take on senior management roles, positions on boards and on committees in the public and private sectors. It will be launched today by SA Employment Minister Michael O’Brien and state Aboriginal Affairs Minister Jay Weatherill – Adelaide Advertiser

Economic reform a Turnbull minefield – Paul Kelly in The Australian believes the Liberal Party confronts a novel political and intellectual dilemma: how does it present as the party of economic reform when the new policy fashion is fiscal stimulus and labour market regulation?

Must accept the Conroy call – Jennifer Hewett writes in The Australian that Communications Minister Stephen Conroy gallantly insists Telstra has a choice about how to react to his big new telecommunications reform. Actually, Canberra is determined to prevent Telstra from having any real choice at all and is willing to use the full force of government to make sure.

Politics is the real driver – Dennis Shanahan in The Australian explains that the real story of the current enthusiasm for the structural separation of Telstra is the difficulty the government’s promise on a national broadband network finds itself in.

Economic medicine went down a treat thanks to Howard – Ross Gittins in the Melbourne Age writes that Kevin Rudd needs to give credit where credit’s due. John Howard, Peter Costello and the Liberals are entitled to a lot of the credit for our comparatively comfortable position. In seeking to deny them that credit, Kevin Rudd is being disingenuous and churlish.

Now it’s a game of smash the pinata – Peter Hartcher in the Sydney Morning Herald writes that we have long known that Rudd is shrewd. The news is that he can be steely as well.

Oh boy – Julie and Julia turn up the heat – Annabel Crabb in the Sydney Morning Herald on the Liberal Party’s women trouble.

US planning to weaken Copenhagen climate deal, Europe warns – Key differences between the US and Europe could undermine a new worldwide treaty on global warming to replace Kyoto, sources say – The Guardian, UK

Carve-up of Telstra ringing in a better deal – Lower prices. Simpler plans. A greater range of products. Actual customer service. These are the potential benefits of the Telstra carve-up and the tough new punishments for poor performance by any telco – Sydney Daily Telegraph 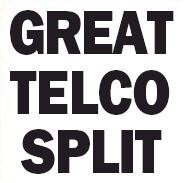 Stephen Conroy rings in a new era for telcos – The Australian

The game’s up for the old Telstra – Melbourne Age

Watching their lives slip away in Port Macquarie – At Lake Cathie, near Port Macquarie, 17 houses are at risk of being washed away – without compensation – Sydney Daily Telegraph

Traveston Dam ‘far from done deal’ – Anna Bligh has been caught out fudging the truth on the “green light” for Traveston Dam, which faces “thousands” of conditions before being approved – Brisbane Courier Mail 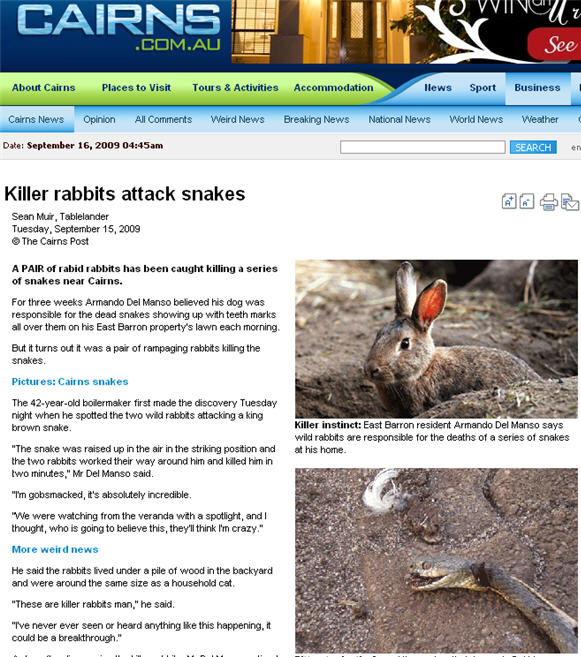 Quick justice for speeding drivers – Speeding drivers who clog up courts by contesting fines will now be dealt with by justices of the peace, in order to get thousands of cases out of the system – Adelaide Advertiser

Smokers: if you can’t ban them, ask them – No smoking – please. That is the message that could be coming to a bus stop near you as the City of Sydney considers using ”courtesy signage” to encourage people not to smoke in outdoor areas, instead of banning it outright. Measures under consideration – to be voted on next week – include signs asking people not to smoke at malls, bus stops and taxi stands and ”etiquette announcements” at city events – Sydney Morning Herald

Hmmmm. Surely these cases should be dealt with on their merits?

What doosey thinks Dennis Ferguson is on the road to redemption? And as if Justice Action chief Brett Collins wasn’t there to stir the hornets nest by symbolically planting geraniums in the new found home of the ex-crim. In Ferguson’s case the NSW and Qld governments are complicit in letting down both the community and Ferguson. They’ve failed to adequately figure how to manage serial offenders and the criminally insane while keeping communities safe. They deem Dennis fit to live in society and like no other crim he’s catapulted to the top of the public housing list for a plum unit in downtown suburbia close to shopping centres, schools, parks and life in high-density Sydney. Inevitably a sick dysfunctional individual will court strife. He has and was sprung selling kiddies toys – to? So again he runs the gauntlet of community hatred and loathing by most of us unforgiving of his horrendous crimes. I think a more fitting place for Mr Ferguson would be one of our detention centres. Lets face it, communities have as much right to say ‘we’ll decide who comes into our suburbs and the circumstances in which they come” as John Howard did when referring to asylum seekers.