The Sydney Morning Herald looks at others who, like Kyle Sandilands, have beaten the totalitarian drum in their comments with Crikey’s Guy Rundle among them.
“In July, writing in the Crikey newsletter, Guy Rundle attempted”, says the Henderson column Nazi remarks go way over the top, “to equate News Corporation’s Rupert Murdoch with Stalin. Rundle assigned News personnel in Australia to the leading Bolsheviks of their day. John Hartigan was Lenin, Chris Mitchell was Bukharin and so on. Sure, Rundle is a part-time comedian. But there was a serious message to his historical vaudeville.”

He concludes his piece with this message: “Let’s welcome the fact that Sandilands’s comments on concentration camps have been bagged. But let’s hope that such condemnation is extended beyond the shock jock brigade.”

PAGE ONE OF THE MORNING’S PAPERS

Leader’s low profile is a Nationals disgrace – An astonishing 95 per cent cannot correctly name the leader of the Nationals. For almost all voters, Warren Truss is the man who isn’t there. An Age/Nielsen poll has found that only 5 per cent of voters can correctly name the Nationals leader – a far cry from the high profile of, say, Tim Fischer, even in opposition – Melbourne Age

Third new Cabinet in one year as Rees reshuffles again – The revolving door of the NSW ministry keeps on spinning, with the swearing in yesterday of yet another Rees Cabinet – Sydney Daily Telegraph

Sexism claims in race for Costello’s seat – The Liberal preselection battle for Peter Costello’s blue-ribbon seat of Higgins has turned nasty, with claims that a sexist campaign has been waged against the woman expected to succeed the former treasurer – Melbourne Age

Heads roll at RBA company – A scandal involving the Reserve Bank of Australia and its global banknote printing activities has claimed its first casualties, with the departures of two key executives. Peter Chapman, Africa manager at the RBA’s polymer bank-note firm Securency, has resigned, while the firm’s South African middleman – white-collar criminal Donald McArthur – has been sacked. Their departures come amid a continuing Australian Federal Police probe into the company – The Melbourne Age

Turnbull keeps powder dry – Malcolm Turnbull is not ruling anything out, reserving the right to keep his industrial relations policy powder dry until the election campaign. But he is not suggesting a return to the radical policy prescription embraced by Howard when the former prime minister unexpectedly won control of the Senate after the 2004 election – The Australian

Speeding bikers beat the cameras – A national police commissioners’ plan to force motorcyclists to wear front number plates has been dumped after 10 years’ study, at a direct cost of almost $500,000 and millions more lost in government revenues – The Australian

Military to lose airspace in $300m savings push – The Australian

Redevelopment under microscope – A controversial parcel of land in Sydney’s outer west owned by an associate of slain businessman Michael McGurk is likely to be “substantially redeveloped” in the near future, according to NSW government documents – The Australian

Blame states if schools complain, MPs told – The Federal Government has advised MPs to blame the states and local grant authorities when fielding complaints from schools within their electorates about projects funded by the $16 billion stimulus spending on primary school buildings – Sydney Morning Herald

Jobs for the boys

Mr 70 per cent has voters in the palm of his hand – Annabel Crabb in the Sydney Morning Herald reckons something funny happens to Kevin Rudd when a fresh opinion poll comes in, confirming that he’s just north of chocolate eclairs in the popularity stakes. He becomes more animated.

Turnbull’s love is never in short supply – The Goanna writing in the Melbourne Age listens to Malcolm Turnbull turn to the scriptures.

France to count happiness in GDP – Happiness, long holidays and a sense of well-being may not be everyone’s yardstick for economic performance, but Nicolas Sarkozy believes they should be embraced by the world in a national accounting overhaul – Financial Times of London 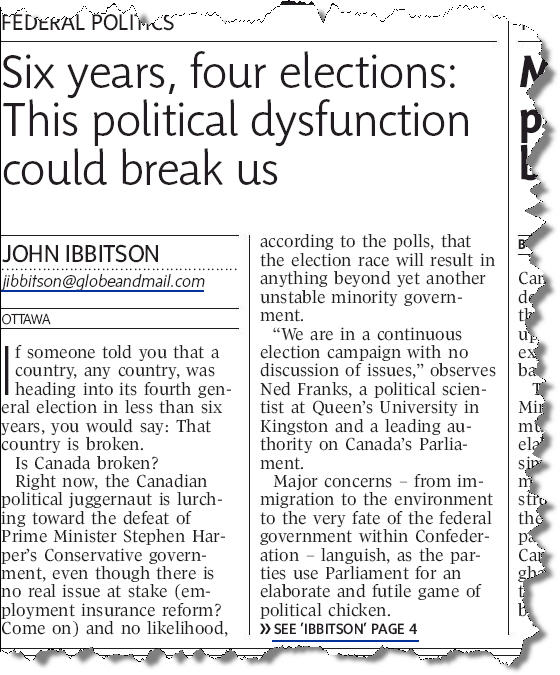 Four elections. Six years. Is Canada broken? – As the Canadian political establishment prepares for yet another vote, with no real issue at stake, our country’s major concerns are left to languish – Toronto Globe & Mail

Business raises carbon claim – Big business is demanding extra compensation under the Rudd government’s carbon pollution reduction scheme, but has rejected Malcolm Turnbull’s “hybrid” alternative, in a final effort to bridge the gap between the parties and get an amended scheme through parliament this year – The Australian

Sharp rise in student suspension – Primary school students appear to be becoming increasingly violent and unruly, with the number of suspensions doubling over the past eight years in Victorian government schools – Melbourne Age

The Worst of Perth

So we can get Canada and London but not Perth? Perhaps you can name this pick of Eastern States media, since the front page of that journalistic wonder The West is never included? It has been out for at least six hours. I know there is a time difference, but tis is just laziness.

I know from WA everything looks ‘east’ but SA isn’t really an eastern state. 🙂

The Worst of Perth

You’re east baby. Deal with it.