Good poll for ALP and Mark Day slags off Crikey

The pick of Monday morning's papers. 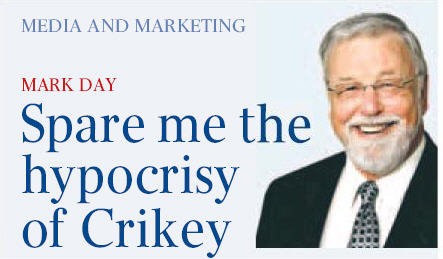 Meet the pests — Mark Day writes: “It is hard to decide which has been the most annoying pest on the media scene in the past week – the shock jock Kyle Sandilands, or the holier-than-thou Crikey website and daily email. Sandilands has been mouthing off again; this time making tasteless jokes about fat people, for which he has earned himself another on-air suspension. Crikey, in pontificating about the Sandilands matter, has revealed itself as a deliberate meddler in the processes that establish media regulatory boundaries. Crikey used to be a media gadfly with a kind of insouciant charm. It traded off the same need, deeply embedded in society, which sustains Sandilands – we all love to hate a bad boy. It is now a crushing, insufferable bore.”

Poll backs Government’s stimulus plan – The Australian public has endorsed the Government’s argument it should continue its stimulus measures and ticked its management of the economic crisis, in an Age/Nielsen poll that shows some improvement in Opposition Leader Malcolm Turnbull’s approval. Two party preferred Labor 55 Coalition 45 – Melbourne Age

PM stimulates praise, but it’s last laugh to Nelson – A solid majority of voters approves of the Rudd Government’s handling of the global economic crisis, supports the continued spending of stimulus money and feels the past year has been kind to them financially. The AC Nielsen poll found that despite a small surge in his personal rating over the past month, the Coalition is in a worse position than it was just after Malcolm Turnbull deposed Brendan Nelson a year ago – Sydney Morning Herald

Most of us doing well in crisis: study – The latest AC Nielsen numbers – Sydney Morning Herald

Bligh is damned if she does … – A Galaxy Poll conducted exclusively for The Courier-Mail has revealed that while voters believe Anna Bligh is serious about cleaning up corruption, they remain outraged over asset sales – Brisbane Courier Mail

McGurk ‘recorded talks with MPs‘ – The murdered standover man Michael McGurk recorded conversations he had with five NSW state Labor MPs and one former federal minister, according to a long-term colleague of the murdered man – Sydney Morning Herald

I have alibi for killing: Byrnes – Sydney Daily Telegraph

Rates eaten as Sydney councils pig out – Mayors and and councillors across Sydney are splurging thousands of dollars of ratepayers’ money on gourmet banquets and waiters. – Sydney Daily Telegraph

Senate vote unlikely in December – The Senate itself, where the Government doesn’t have the numbers, would have to agree, directly or indirectly, to the unscheduled sitting, according to advice from Senate Clerk Harry Evans – Melbourne Age

Malcolm Turnbull to come under fire on IR laws – The Australian

Laws ‘will aid illegal sex work’ – Prostitution will flourish even more under new laws before State Parliament, a Brisbane brothel owner has told The x

With neighbours like these, who needs Americans – Growth in China and the rest of Asia should put Australia’s recovery on the map well in advance of Europe and the US, writes Ross Gittins in the Sydney Morning Herald

When whitefella law intervenes in a love affair – The Melbourne Age tells the story of a girl 12 and a boy 16 who were married in the traditional Aboriginal way and began living as husband and wife in a remote outstation with a population of 100. She became pregnant and he was sentenced to jail.

The greatest game of all: politicians pretending to be sports fans – Phillip Coorey in the Sydney Morning Herald investigates

Malcolm kicks an own goal – Ewin Hannan in The Australian sees Malcolm Turnbull’s decision to mark his first year as Opposition Leader by reopening the door for individual workplace contracts as a high-risk decision with little political upside.

Turnbull gives hint of future post-Howard – Flenn Milne in The Australian argues that when conservative political parties start to use jive talk – particularly black bling – to describe their state of being you can rest assured the street palaver is probably so two decades ago.

Obama adviser victim of own past – Paul Sheehan in the Sydney Morning Herald looks at the resignation of Barack Obama’s environmental adviser Van Jones.

Boom forecast for coal output – A coal investment boom is driving Australian production to new peaks even as our biggest export markets shift towards cleaner fuels. Over the next five years Australia’s coal production is set to bulge by 30 per cent to a record 450 million tonnes a year compared with 350 million tonnes produced now, according to the energy consultancy Wood Mackenzie – Sydney Morning Herald

Financial sector may avoid taking its medicine – Ross Gittins in the Sydney Morning Herald writes that reregulation of the financial system is what should happen now to prevent a repeat of the global financial crisis, but “I’m starting to doubt that it will.”

Losses leave GE Capital in trouble – GE Capital Australia has racked up losses of $263.8 million in the Australian market, with its US parent threatening to cut off its funding in 12 months – The Australian

Australia coming last on climate – While the debate in Canberra focuses on whether to pass climate change legislation this year, the analysis by London-based consultants Vivid Economics suggests Australia is already being left behind. Only developing nations South Africa, India, Saudi Arabia and Indonesia fare worse – Melbourne Age

A longer Do Not Call list: ‘bad call’ – Moves by the federal government to include all businesses on its Do Not Call Register will cost the Australian economy billions of dollars if companies are restricted from selling vital services to each other – The Australian

Decline in successful auctions – Sydney real estate agents secured a 66 per cent weekend auction clearance rate which, while respectable, was the weakest result since May – Sydney Morning Herald

Pressure builds on first-home buyers – The watering down of government grants from September 30 comes as home loan interest rates are set to rise, banks toughen their lending requirements and Australia’s house prices remain among the most expensive in the world – Adelaide Advertiser

Children in knife-point robberies – Children as young as 10 have been caught using knives during armed robberies in Victoria, crime statistics reveal. The figures show that in the last financial year 58 children aged between 10 and 14 were apprehended, a 45 per cent jump on the previous year. A further 287 aged 15 to 19 were also arrested in 2008-09 – Melbourne Age

Podiatrists ‘should not prescribe’ – Doctors are furious about a State Government decision to let podiatrists prescribe drugs of addiction, warning that it could prove a bonanza for ”doctor shopper” drug addicts – Melbourne Age

Drinking at work over, bar shouting – A shout after work may be on the way out, as health authorities try to recruit big-brother bosses to curtail staff drinking habits – The Australian

Adelaide lesbians to marry in Melbourne – SA same-sex couples may be barred from tying the knot, but Kate Randell and Phoebe Maxwell have discovered a loophole. Later this month, the Henley Beach South couple will have their three-year relationship recognised at a civil “partnership” ceremony at the British consulate in Melbourne, and be recognised under UK law – Adelaide Advertiser

I am sorry to be so ignorant, but this is the first time ( at least consciously) that I have heard of Mark Day, but his comment that Crikey ” has revealed itself as a deliberate meddler in the processes that establish media regulatory boundaries” is a bit odd. Why on earth shouldn’t Crikey comment on the boundaries of good taste etc of a media outlet? Is not that what a free press is all about – comment on anything that takes it’s fancy and is news worthy?
Crikey’s real sin I suspect, is it’s attacks on the Australian, and the man they used in the UK to call “The Dirty Digger”, before the leopard changed it’s spots and became an ersatz American.