The PM goes to the country footy with bushfire victims 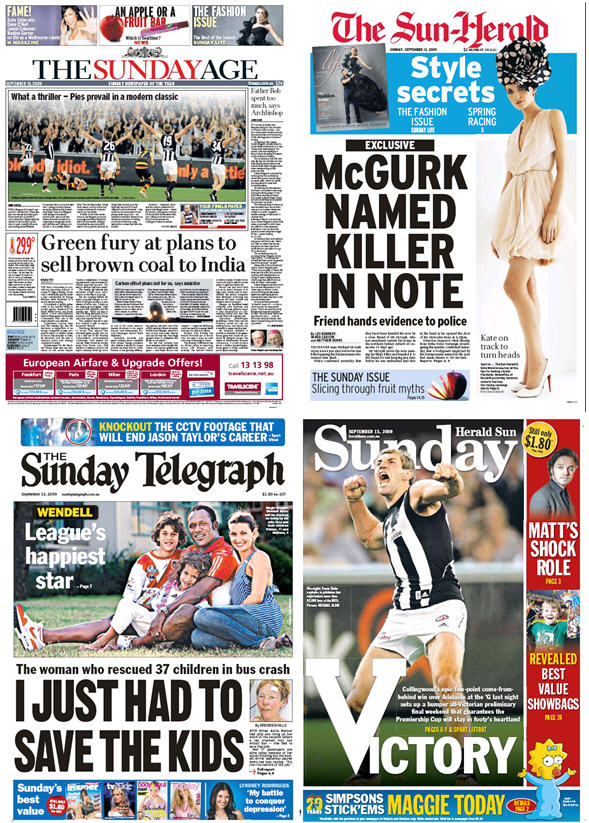 McGurk named killer in note – Homicide Squad detectives confirmed yesterday they were examining the note, which the slain stand-over man signed and handed to a friend in case he met with foul play – Sydney Sun Herald

Labor in a flap as Senate plays game of chicken – Michelle Grattan in the Sydney Sun Herald writes that the Senate is making sure nothing comes easy to the Rudd Government, rejecting significant bills on the first attempt.

Barnaby Joyce can split the Coalition – Tim Gartrell in the Sydney Sunday Telegraph on an Auspoll finding about the lack of recognition of National Party leaders,

We could bring back AWAs if we win, says Turnbull – Sydney Sun Herald

Ethnic squad titles ‘racist’ – A leading Liberal MP has vowed to do all he can to abolish the Middle Eastern organised crime squad, saying ethnic branding has no place in crime fighting – Sydney Sun Herald

The Iceman melteth – Melissa Fyfe ikn the Melbourne Sunday Age on the political consequences of getting lost on a moujntain.

Howard may be history on Timor – The former Coalition government had a vastly different idea of how independent our near neighbour should be than what eventuated. Precede Precede Precede, writes Paul Daley in the Sydney Sun Herald.

Book import laws are madness based on delusion – Guy Rundle writes in the Melbourne Sunday Age that time and technology have overtaken the way we digest our reading matter.

Time to get personal with disability funds – Lisa Carty in the Sydney Sun Herald writes that minimising bureaucracy for carers would help them, and our money, to go a lot further.

Good as gold – The gold price has gone through the roof, cracking $US1000 an ounce for the third time in history last week – and mum and dad investors are jumping on board – Melbourne Sunday Age

Traveston Dam gets approval – The controversial $1.6 billion Traveston Crossing Dam has been given environmental approval and could get the go-ahead from Federal Government within weeks – Brisbane Sunday Mail