Miranda Devine in the Sydney Morning Herald today gives my Crikey colleague Bernard Keane one up the bracket and concludes her sympathetic look at Senator Steve Fielding thus: “The unpleasantness of the past week will have added to the silent suffering of dyslexics. But it says more about those ruthless opportunists who have kicked Fielding, than it does about him.”

Premier agrees to inquiry into Labor role in land deals – A parliamentary inquiry will be held into the McGurk affair after the Government backed down yesterday hours after the Premier, Nathan Rees, characterised such an inquiry as ”absurd” – Sydney Morning Herald

Rules of the game changed for Knowles – The former NSW Planning Minister, Craig Knowles, has revealed he was personally approached to be the chairman of Socceroos captain Lucas Neill’s new western Sydney A-League team by Football Federation Australia heavyweights Frank Lowy and Ben Buckley. Mr Knowles also said he did not know about the involvement of murdered Sydney bagman and enforcer Michael McGurk in the Neill-bid company – Sydney Morning Herald

McGurk investigation snares ministers over land deals – Senior ministers will be called to give evidence to a parliamentary inquiry into allegations of corruption around western Sydney land deals, stemming from the murder of Sydney businessman Michael McGurk. In another damaging blow Premier Nathan Rees was forced to back the inquiry when he realised the Government would not gain the numbers in the Upper House to block it – Sydney Daily Telegraph

The stain that keeps spreading – Damien Murphy in the Sydney Morning Herald summarises the McGurk case so far.

Senate votes down $1.9bn health cuts – The Senate has dealt a $1.9billion blow to Kevin Rudd’s health budget by rejecting plans to means-test taxpayer rebates for private health cover and increase levies on the non-insured – The Australian

Brumby gets his man, with Gillard’s help – Premier ohn Brumby has had a big win over leaders of the ALP’s Right faction and will have his preferred candidate installed as Labor campaign director for next year’s state election. Under a deal brokered by Deputy Prime Minister Julia Gillard and expected to be endorsed by the Right within days, Mr Brumby’s chief policy adviser, Nick Reece, will take the key post at ALP head office – Melbourne Age

Mine unions push for job guarantees – Mining unions will test Labor’s workplace laws by pushing to insert job security clauses into agreements with employers in a bid to limit job cuts, shield experienced workers from retrenchment and wind back the use of contract employment – The Australian

Alarming wait for urgent operations – Waiting lists for urgent operations such as heart bypasses and cancer surgery have blown out dramatically this financial year, with the number of operations performed statewide falling by 5260 to 32,913 in July compared to the same month last year – a 14 per cent slump – Sydney Morning Herald

Financial ties that threaten health – Ray Moynihan in the Sydney Morning Herald writes that juicy inducements to doctors from drug companies are a threat to public health. Evidence shows that such ties can distort the way that practitioners treat us.

Clean up this mess: put planning on a pedestal – Elizabeth Farrelly writers in the Sydney Morning Herald that it is true, as government theory, that incompetence generally beats conspiracy. Sadly, however, the two are not mutually exclusive. Planning in NSW increasingly seems to involve both; a conspiracy of incompetents.

Emotion makes it hard to focus on harsh realities – Michelle Grattan in the Melbourne Age ponders whether it is wise for Australia as a nation to to continue to pick at the BAlibo tragedy.

Global financial shock gives us chance – Dennis Shanahan in The Australian believes there is a rapidly emerging new world order for international co-operation, and Australia is trying to ensure it can build on its longstanding contribution to and founding membership of the G20 to be at the new and enhanced global negotiating table.

Power put in unions’ hands – Allan Wood in The Australian gives credit to then chief executive of Peko-Wallsend Limited, Charles Copeman in 1986 for starting the process of labour market deregulation

Punting on coal is a loser, tell the Government – urges David Spratt in the Melbourne Age

Obama under observation: a critical moment – President Barack Obama’s speech on health care reform today will be a pivotal moment of his presidency. For the first time he is expected to firmly declare he wants Congress to pass a plan with a public insurance option, the plan favoured by Democrats in the House, but resisted by some moderate Democrats and most Republicans in the Senate – Sydney Morning Herald

Libya stinks but hold your nose – Greg Sheridan writes in The Australian that governments such as Britain’s and Australia’s are right to continue to engage the Libyans.

Barrick gives gold bulls a reason to run – Barrick Gold, the world’s largest gold producer, is raising $US3 billion ($3.5 billion) through a share offering to close its gold hedges, a move widely seen as delivering credibility to the bullish outlook for the metal – Sydney Morning Herald

Bent out of shape over trademark laws – Australian marketers are facing stiff resistance in getting shapes or symbols registered as trademarks. This follows a court ruling that has left experts to ponder if the business of branding is only going to get harder – Melbourne Age

Storm Financial victims hit again by bank cash grab – Up to 10,000 investors who lost millions in the collapse of the Townsville-based advisory firm have since been slugged “adviser service fees” by a company acting on behalf of the Commonwealth Bank – Brisbane Courier Mail

Byron council to vote on demolishing seafront homes – Byron Shire COuncil is pushing ahead with plans to demolish a number of seafront houses it says are most affected by coastal erosion. The plan is likely to inflame relations with the State Government, strained since the Government instructed the council not to finalise its local environment plan before the Government’s coastal management plan is completed – Sydney Morning Herald

Australia out of step on nuclear – Australia is alone among advanced countries thinking it can meet deep greenhouse reduction targets without a nuclear power industry, the head of the Federal Government’s nuclear agency, Ziggy Switkowski, has said – Melbourne Age 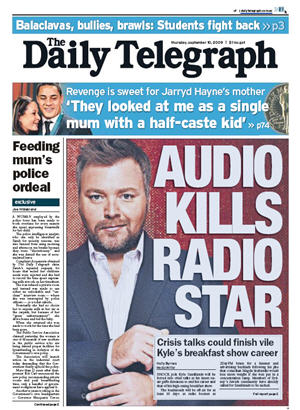 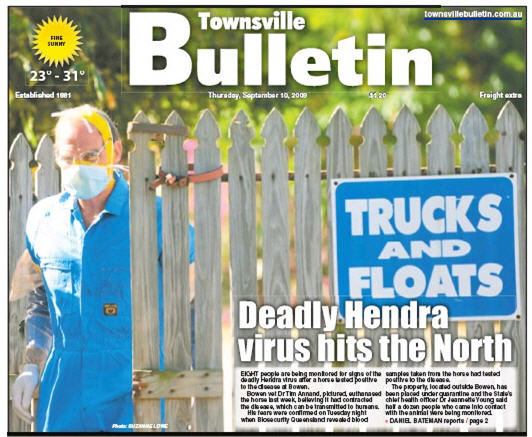 Will a cover-up save vet Tim Annand? – A week after Hendra virus killed Rockhampton vet Alister Rodgers, the lethal bat-borne disease has also been detected in a horse Dr Tim Annand treated near the north Queensland town of Bowen last week – The Australian

So just who rules this school anyway? – Balaclava-clad students jeered as frightened children stood outside the gates of their government high school yesterday with signs reading “Stop the violence”. School bullying has become so rampant that parents fearing another Jai Morcom-style death threatened to remove their children from school. Police have charged two 15-year-old boys with assault and affray after an alleged serious attack on students at Airds High, near Campbelltown in Sydney’s southwest – Sydney Daily Telegraph

Parents boycott Seven Hills buses – Parents have banned their children from a school bus service because of theft and violence. Concerned parents yesterday told The Daily Telegraph they took their children from the Hills Sports High School’s bus service in Sydney’s west because it was “too dangerous” and “not worth the risk” – Sydney Daily Telegraph

Young troublemakers set on the road to antisocial adulthood – One of the world’s most famous and long-running studies of children has found children who persistently lie, steal, are physically aggressive or cruel are at high risk of turning into antisocial and troubled adults. Yet governments are ignoring proven ways of fixing the problem – Sydney Morning Herald 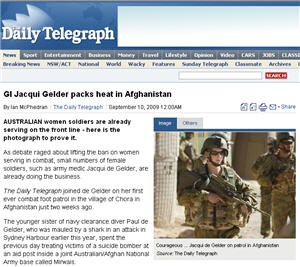 Sex diseases on the rise – Chlamydia, gonorrhoea and syphilis rates in South Australia are at their highest level in at least four years, sparking renewed warnings to young people about the dangers of unprotected sex – Adelaide Advertiser

Calls to ban booze bombs – “Boozxebombs” served at pubs and clubs are tipping drinkers over the edge, leading to drug experts calling for them to be banned. Among the most intoxicating drinks is a fish-bowl sized margarita containing an astonishing 13 shots of alcohol – Melbourne Herald Sun

Slurred speech? No more booze for you – Hotel staff for the first time are to be given clear legal guidelines about when to eject patrons for being excessively drunk under legislation introduced in the SA Parliament yesterday – Adelaide Advertiser

Cat and dog combination nothing to sneeze at – A team of New Zealand researchers who tracked more than 1000 people over 30 years found those who lived with dogs and cats for significant periods of time were less likely to develop allergies, compared with those who lived with either a dog or a cat – Melbourne Age