Women on the defence front line, terrorist threat on the docks

Lifestyles of the rich and infamous – The assassination of such a low-life character as Michael McGurk in such a high-life suburb as Cremorne was always going to focus attention on the city’s different tribes, but now Sydney and the State Labor Government have become a free-fire zone mixing unfounded gossip and claims of graft and corruption – Sydney Morning Herald

MPs pay for misusing perks – The Rudd Government has taken the axe to the generous printing entitlements of politicians and given notice of broader reforms by commissioning a six-month review of all other perks, including travel allowances. The announcement coincided with the publication yesterday of a report by the federal Auditor-General that found the printing allowance was widely misused – Sydney Morning Herald

Rorting MPs to lose their perks – The Australian

Private schools’ cash boost – Victoria’s wealthiest private schools are set to receive massive increases in federal funding, with some to get more than 20 per cent extra over four years despite enrolments rising only marginally by comparison – Melbourne Age

ACCC spent $5m on fees for doomed grocery site – Criticisms of the Australian Competition and Consumer Commission’s management of Grocery Watch, and its reincarnation as the independently run Grocery Choice, have been made in a submission to a Senate inquiry into the events leading up to the Federal Government’s sudden decision to scrap the project, five days before its remodelled version was to be launched by the consumer group Choice on July 1 – Sydney Morning Herald

Revealed: terrorist threat on our docks – Convicted criminals who pose a terrorist or organised crime risk are free to work on Australia’s ports due to gaping holes in the nation’s maritime security, according to a report commissioned by the Federal Government – Sydney Morning Herald

Liberal senator crosses the floor on refugee bill – A lone Liberal senator, Judith Troeth, crossed the floor of Federal Parliament to scrap the debts only Australia imposed on people owed protection. But the retiring senator’s move captured the sentiment of more within her party but whose political ambitions stopped them from following her – Sydney Morning Herald

Protect whistleblower, unions urge – The head of the union representing thousands of airport workers has called for the federal government to ensure that whistleblower Allan Kessing is not prosecuted a second time for leaking a report on airport security – The Australian

Currency, shares pushed to new highs – Investors are backing Australia as the world’s standout economy, pushing shares and the dollar to new highs while business confidence has soared to its best level since 2003 – The Australian

Battle over stimulus spree as economy soars – A flood of good economic news, including a six-year high in business confidence, a surging sharemarket and the continued march of the Australian dollar, has intensified pressure on Kevin Rudd to scale back economic stimulus spending – The Australian

Parents want to refuse Sydney school grant – A group of parents is considering boycotting the Rudd government’s school building program and sending back its $2.5 million grant in protest at being forced to knock down a building of four classrooms to build a new block of four classrooms – The Australian

Chemical plant Huntsman hit hard by recession – Australia may have avoided a “technical recession” in the mind of the Treasurer, but 325 sullen faces at a Brooklyn chemical plant paint a much harsher reality – Melbourne Herald Sun

Once more with Fielding, a spellbinding display – Annabel Crabb in the Sydney Morning Herald picks on the day’s easy target

Steven Fielding’s learning secret is no shame – Neil Mitchell in the Melbourne Herald Sun reckons it says something of the blood sport that is Australian politics that the Family First senator became a target for sniggering and sniping after he stumbled through a speech in which he sounded half drunk, and then conducted a door-stop interview in which he confused the words “fiscal” and “physical”.

Memo to future MPs: don’t leave your run too late – Peter Costello writing in the Sydney Morning Herald has some not so subtle digs at Liberal Party associates.

No such thing as a free market – Ross Gittins tells us in the Sydney Morning Herald. They need to operate within a government-imposed framework and be diligently regulated to ensure rules are obeyed.

Why the PM stands by his man – Peter Van Onselen in The Australian looks at evidence in Ruddspeak of his economics adviser Andrew Charlton but concludes that the era of conviction politicians might be over.

Rudd aims spear at Liberals’ heart – Paul Kelly in The Australian says in his his latest fashioning of a political narrative Kevin Rudd has located his government in the Hawke-Keating reform tradition and seeks to de-legitimise the Howard era from any claim on Australia’s economic and social success.

Love in the noughties

Ivy, Star City on violent venue list – Justin Hemmes’s mega-club, the Ivy, and Star City will have to enforce 2am lockouts and will need to serve alcohol in plastic glasses from midnight after being identified as two of the most violent clubs in the state – Sydney Morning Herald 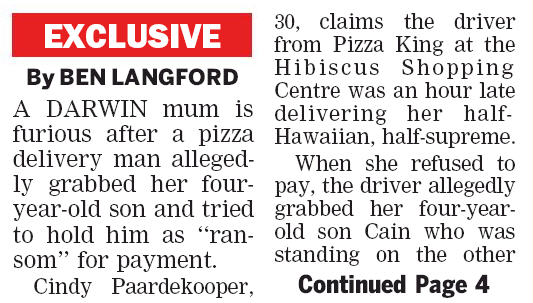 Last drinks feared for ailing city clubs – Sydney’s inner-city licensed clubs are at risk of extinction, with more than a dozen forced to close and those that remain having to sell the farm to avoid going under. The impact of increased competition, the indoor smoking ban and the changing tastes of inner-city workers have led to the number of clubs there halving since 1999, and the attrition rate shows no signs of slowing – Sydney Morning Herald

Push for women on defence front line – Women should be able to serve in all frontline combat units of the Australian Defence Force, including the SAS and commando units, under a controversial plan that could avert a looming recruitment crisis – The Australian