Sandilands and scandal: is this the tipping point?

Kyle Sandilands has hit the airwaves -- and headlines -- again with another attention-grabbing stunt. Will the provocative tactics that have made his career also break it?

Update: Sandilands has just been suspended by 2DayFM, effective immediately: ‘‘2Day FM believes the comments made by Kyle were unacceptable and sincerely apologises and regrets any offence they caused’’ – SMH

At Crikey, we like to pretend that he doesn’t exist (well mostly), but everyone is talking about Austereo’s favourite shock jock Kyle Sandilands and his latest publicity grabbing stunt.

Just weeks after the scandal involving a 14-year-old child revealing on 2DayFM’s Kyle and Jackie O show that she was raped at 12, further controversy has hit the show, this time involving actress and comedian Magda Szubanski and a joke about fat people and concentration camps. Szubanski has a contract with weight loss company Jenny Craig and is of Polish origin.

The story hit the front page of the Herald Sun today, noteworthy because the main photo is of Szubanski, indicating who the Herald Sun sees as the bigger star. 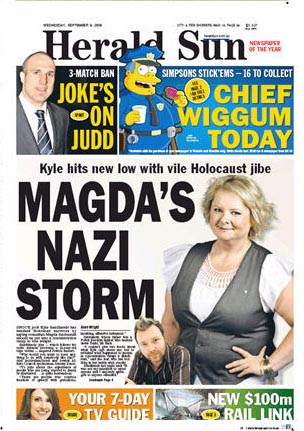 Magda could have another run out of [the Jenny Craig contract] … She could get another season out of them, easy … she’s not skinny.

And then when Jackie O suggested her build was just a big one — and perhaps she couldn’t lose more weight, he made the comment that spawned 100 articles:

That’s what all fat people say … You put her in a concentration camp and you watch the weight fall, like she could be skinny.

Today on his radio show Sandilands addressed the controversy in typically glib style. He didn’t mean to “offend her [Szubanski] or anyone else with those comments”. It was “just one of those things”. Yada yada.

Beyond the Kyle-says-something-offensive shock, the real question now is surely whether the provocative tactics that have made his career, will also break it. But where is the tipping point?

Despite public outcry over the rape scandal, viewers were still tuning into the Kyle and Jackie O show, with ratings up last month.

But ratings only mean something if you have advertisers — and sponsors like American Express and Optus did pull their dollars from the show following the controversy.

Ad exec Adam Ferrier backed their reaction calling on advertisers to use their dollar-power for good:

Those in the advertising industry, who buy media space, sponsor radio shows, or advertise on radio will in the future think twice about working with Kyle and Jackie O. They may achieve good ‘reach’, but at what cost. What brands want to:

• be associated with the exploitation of damaged people?

• be associated with the sexualisation of children?

• be associated with rape, bigotry, and misogynistic behaviour?

• contribute to a show that’s contributing to the demise of our culture?

The rape scandal also cost Sandilands more personally. He lost his job as an Australian Idol judge thanks to pressure from Nineteen, the London-based owner of the Idol franchise and the show’s sponsors. The decision was also influenced by Channel Ten’s recent decision to move the show to the more family-friendly timeslot of 6:30pm.

More generally, Kyle and Jackie O are on the nose. A survey by UMR released on Monday highlighted this. As The Australian‘s Media Diary notes:

Then again, people love a villain, and unpopularity does not necessarily mean poor ratings. As Amanda Meade notes, “Sandilands has never been well liked, despite his impressive media profile”.

For TV celebrities like Sandilands (and The Chaser and Gordon Ramsay), “when your insulated world collides with the world most other people live in, things can become really ugly really quickly”, says Mia Freedman.

In the face of such extreme public anger and media castigation, she says, “some boundary pushers have understood faster than others that they’ve gone too far. Some remorse has been heartfelt and sincere like The Chaser.”

So far Sandilands hasn’t grovelled very hard over the Szubanski incident. Will he have to? And will he live to insult another day?

Jewish leaders are speaking out publicly against Sandilands. And Evan Moloney’s asking whether jokes about the Holocaust are ever OK? Conclusion: they are sometimes… just not Kyle’s.

Meanwhile, the Magda factor cannot be discounted in all this. She’s hot media property at the moment — the women’s mags fought to have the slimmer Szubanski on their cover.

By insulting Jewish people and a woman whose weight loss battle many identify with (not to mention the public at large) in just one sentence, Sandilands has invited the wrath of large segments of the community. But whether the outrage means anything depends on advertisers’ response.

Could 2GB poach Sandilands to be the new Stan Zemanek?

Am I being overly cynical, or is this starting to look like it’s being done on purpose. I would hate to underestimate Sandilands abilities to be a total prat, but surely not even he could be this stupid by accident?

As you said in this article, his ratings went up after the lie detector debacle. Certainly his media profile has increased (internationally!!) to a level an ignorant, talentless moron like him could not have achieved any other way.

Is it possible he is doing all this on purpose with an eye to lucrative shock-jock positions elsewhere?

And if it is, what do we do? Should we send out warnings or desperate email his CV to every radio company that doesn’t broadcast in Australia?

I believe the problem(or asset) that Kyle now has is that it is ok to be “Vile Kyle” attacking people while your audience is a bunch of teens and young adults but his audience now includes adults who are looking for the next offense. If he believed what he said in the first place he wouldn’t spend so much time apologising, or he may be able to inject some sincerity into his apologies.

It could be a problem when he doesn’t plan it and an asset when he tries to manipulate the press.

I personally have more problems with Jackie O who tries to pass herself off as a lady with respect for other people but should remember that if you lay with dogs you come up with fleas. Sitting with a vile person cheering them on for your benefit tends to be inexcusable. Is her response to this comment on record? Anyway she can always go back to her TV career…..Oh

Maybe if some were to just prick him with a pin. He looks a bit chubby from all the hot air he produces. He could even market it as a new diet for idiots – sure to be a money spinner with his audience

This latest on air gaff by Kyle Sandilands proves that he lacks 2 things that I consider necessary to be a force in the media – or any industry for that matter – class and intelligence. It also proves a long-held opinion – empty vessels makes the loudest noise. Kyle, and Jackie, I’m sad to say, should both be sacked, regardless of how high their ratings are. Advertisers have clearly realised that their money-earning abilty will continue to fall as long as they continue with the sensationalist rubbish they currently braoadcast.