Property developmentPensioner who gave $75,000 to the ALP – As calls mount for a royal commission into the relationship between developers, lobbyists and government after the murder of Michael McGurk, questions have been raised as to how a 68-year-old disability pensioner was able to donate $75,000 to the NSW ALP. As one source said of the donor, Richie Vereker, ”He doesn’t have enough money to buy lunch.” – Sydney Morning Herald 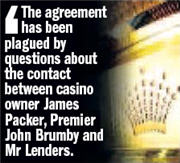 State forced to review Crown deal – The State Government agreed to give Crown Casino 150 extra gaming tables without any assessment of the impact on problem gambling and without knowing what benefit the deal would offer taxpayers. Opposition parties have threatened to block legislation needed to approve the increase in tables unless they see research justifying the Government’s decision – Melbourne Age

One, two, three bites at the cherry for Labor staffer – The daughter of the former state Labor minister Brian Langton, Davina, has been employed in Nathan Rees’s office two years after leaving the state Labor Government with a six-figure payout to work for the Rudd Government. She also got a redundancy payment when former federal defence minister Joel Fitzgibbon resigned  – Sydney Morning Herald

Boundary changes ‘woeful’: ALP – Labor Party has launched a scathing attack on the Australian Electoral Commission over its draft redistribution of the electoral boundaries in NSW, saying it was “woeful” and that the AEC had “misunderstood its obligations with respect to discharging its duties” – Peter van Onselen in The Australian

Malcolm Turnbull up but still far behind PM Kevin Rudd – Kevin Rudd’s personal popularity as measured by Newspoll has lifted to a six-month high, despite problems with the economic stimulus spending, rising unemployment and fears of interest rate rises – The Australian

Fighting to lead state Labor – Simon Benson in the Sydney Daily Telegraph gives a form guide on the potential starters.

IVF mums to fork out after cutbacks – More than 11,000 infertile women face a financial double whammy with budget cuts to IVF and obstetric services to cost them $3800 – Sydney Daily Telegraph

Adelaide plan stays secret – Attempts to force the State Government to release a report behind the 30-year plan for Greater Adelaide have failed, sparking claims the process is skewed – Adelaide Advertiser

NSW leads uprising against Swan – NSW is leading a revolt against the Rudd Government over a proposal that would force the state to spend more than $1.4 billion on core services to tackle a health crisis before it received any Commonwealth assistance – Sydney Daily Telegraph

Treasury chief to face Senate panel – A special one-day hearing on the Government’s economic stimulus package, with Treasury secretary Ken Henry as the star witness, is expected to be approved by the Senate today – Melbourne Age

Memory dims for children overboard – An extract from Paul Kelly’s book “The March Of Patriots – The Struggle For Modern Australia” published in the Sydney Daily Telegraph looks at conflicting accounts about whether John Howard knew that no children were actually thrown overboard.

Parolees allowed to travel overseas, before their sentences are up – Sydney Daily Telegraph

Metro plan warnings kept out of cabinet – The state’s top transport official and senior bureaucrats from Treasury and the Department of Premier and Cabinet have been warned that a second rail tunnel through the city will be needed by 2020 even if the $5.3 billion CBD Metro is built. But the Sydney Morning Herald has learnt that the cabinet has been largely shielded from the advice about the urgent need for this so-called CityRail ”relief line”.

Who will pay for the tragedy of dementia? – Piers Akerman in the Sydney Daily Telegraph considers the implications of a report by Access Economics commissioned by Alzheimer’s Australia that has estimated the number of Australians with dementia will quadruple by 2050, rising sharply from 245,400 today to 1.13 million .

Rudd will need reform for recovery – Gerard Henderson in the Sydney Morning Herald writes that the problem with Rudd’s tactic is that it diminishes, unintentionally, the Hawke-Keating role in the transformation of the economy. In February, Keating queried Rudd’s critique of neo-liberalism on Lateline, pointing out he had been central to the reduction in protectionism, the floating of the exchange rate and introducing flexibility into highly regulated industrial relations. This reform agenda was continued by the Coalition from 1996 until its defeat – Sydney Morning Herald

Pyrrhic victory may help Stewart – George Williams writes in the Sydney Morning Herald that former state minister Tony Stewart suffered a setback on Friday in his legal battle to restore his reputation because of the centuries-old constitutional principle that law and politics do not mix. Despite losing this round, Stewart may still have a win in court and ultimately in the field of public opinion.

Roles reversed in slushy squabble – Annabel Crabb in the Sydney Morning Herald hears Julia Gillard explain how not only had the previous government been just as incompetent as this one but it had been just as self-centred and boastful too.

Embassies no place for mates – Malcolm Colless in The Australian says Kevin Rudd should think beyond rewarding Labor mates when he decides who will fill the soon to be vacant position of ambassador to Washington.

Unwind the stimulus – Michael Stutchbury in The Australian

Coalition attack fails to ignite – Dennis Shanahan in The Australian says the inescapable trends in the Newspoll figures over the past year or so are that Kevin Rudd has maintained freakish levels of popular support – back up three points to 64 per cent – while Turnbull’s early promise has been marred and mired by the fake email disaster.

Movie Studios See a Threat in Growth of Redbox – The REdbox Rental kiosks hold about 500 DVDs and focus on new mainstream releases. Customers follow a series of touch-screen prompts to use the kiosks, which vend from slots on the side. Once a selection is made, the customer swipes a credit card through the reader. The card is charged a dollar (and tax) for each DVD rented; the charges for additional days, if any, are added when discs are returned. The charge for lost DVDs is $25 – New York Times

Solar project on the skids – Solar Systems, the company that planned to build the world’s biggest solar power station in north-west Victoria, has been placed in receivership, putting the future of the project in serious doubt – Melbourne Age

Eco group backs Brumby on pipeline water rights – The environment would be better served if new water-sharing rules affecting the north-south pipeline were approved, according to long-time opponents of the project – Melbourne Age

NT radio station forced to play more country – Territory FM 98.7 in Alice Springs – run by Wiseguy Pty Ltd – is now running “unhosted country music programming” for a massive 87 per cent of its airtime. Its listeners are being driven mad and are ropeable about the changes. But the move came after the Australian Communications and Media Authority found Wiseguy was breaching the terms of its narrowcasting licence by broadcasting too much mainstream music and programming – Northern Territory News

Pornography and prejudice: Jane Austen’s dirty talk is a sweet affair – There are some predictable smirks, but a show imagining the novelist’s work with an explicit playwright is surprisingly sweet and witty – The Guardian, UK

Just when you thought NSW had seen it all – a political link to murder?