John Howard back in the news

The nanny state is coming – the National Health Preventative Taskforce has its way, by 2020 Australians should be beer-refusing, meat pie-avoiding non-smokers. Vast new bureaucracies will be established with just one thing in mind: To stop you from eating, drinking and smoking anything the government disapproves of – Brisbane Courier Mail

Chinese workers exploited in building sites all over town, just like home – writes Kirsty Needham in the Sydney Morning Herald

Queensland workers’ watchdog rocked by factional war – Queensland taxes pay for eight commissioners on $300,000 a year each whose duties have been slashed but are guaranteed their jobs until they turn 70. The State Government has no idea what it will do with the Industrial Relations Commission and is hoping talks later this month with the Federal Government and other states about a national system will boost the workload of the faction-riddled commission – Brisbane Courier Mail 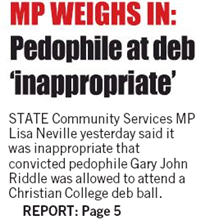 Pedophile at deb ‘inappropriate’, says MP – “It probably wasn’t the best idea by the school,” Ms Neville said. “It is clear that this has caused considerable distress for some families.” Gary Riddle was charged with 14 counts of indecent assault against nine girls aged eight to 16, between 1971 and 1989, and was sentenced to five years in prison in 2002. – Geelong Advertiser

Canberra to maintain a hard line on Fiji – Rowan Callick writes in The Australian that the Pacific-watching community, such as it is in Australia, is wringing its hands about what to do about recalcitrant Fiji – but Prime Minister Kevin Rudd is displaying no second thoughts.

An economist’s laugh, but joke’s on us – David Burchell argues that in practice, a good deal of the fiscal stimulus doled out across the Western world over the past 12 months has followed Keynes’s light-hearted spirit. Just as for Keynes the pharaohs’ pyramids made better public works projects than did railroads, so for us the best form of stimulus is that which gets money into people’s pockets the fastest, regardless of its economic or social efficacy – The Australian

Focus on the means – Our present approach to solving global warming will not work. It is flawed economically, because carbon taxes will cost a fortune and do little, and it is flawed politically, because negotiations to reduce CO2 emissions will become ever more fraught and divisive. And even if you disagree on both counts, the present approach is also flawed technologically writes Bjorn Lomborg in The Australian

PM’s task: making voters see they dodged a bullet – Phillip Coorey in the Sydney Morning Herald says that domestically, there lingers a problem of convincing people what they avoided, let alone have them appreciate it. 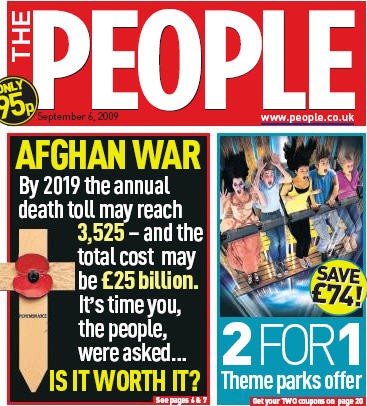 SHALL WE STAY OR SHALL WE GO NOW? As Gordon Brown is forced to defend UK’s Afghan role, we ask… Should we pull our troops out of Afghanistan NOW? Is it time – to use the title of a 1971 protest song – to Bring the Boys Home? Freda Payne was singing about the Vietnam War in which more than 58,000 American troops died. Now Afghanistan is in danger of becoming Britain’s Vietnam – The People, UK

Marathon fight over what lies beneath the Flinders Ranges – The anti-Marathon lobby is made up of an array of strange bedfellows including greenies, scientists, tourists and politicians – most notably federal Liberal heavyweight Nick Minchin, who, as resources minister, approved the nearby Beverley uranium mine. They are stepping up a campaign urging the Rann government not to let Marathon continue its work – The Australian

‘Few checks’ made on big projects – Only a small proportion of environmental conditions imposed on projects such as the Gorgon gas plant are monitored by authorities, a survey of Australia’s biggest companies has found – Sydney Morning Herald

Climate change: melting ice will trigger wave of natural disasters – Scientists at a London conference next week will warn of earthquakes, avalanches and volcanic eruptions as the atmosphere heats up and geology is altered. Even Britain could face being struck by tsunamis – The Observer, UK

Carlton off the air, back in the Herald – The broadcaster Mike Carlton will announce on air this morning that he is leaving his 2UE breakfast radio slot to return to the Herald as a Saturday columnist – Sydney Morning Herald

3D TV just a mirage – Mark Day writes in The Australian on how next year will see the introduction of receivers capable of displaying pictures of incredible depth on flat screens a couple of centimetres thick.

Insurance fears deter bowel cancer tests – Australians could be shying away from life-saving genetic tests out of fear of being denied insurance cover, according to experts who found that half the people offered a test for a mutation that causes bowel cancer refused the procedure – The Australian

Meals, trips used to sway choice of devices – Some medical device companies have made secret financial arrangements with doctors in an attempt to influence the brands they implant in their patients – Sydney Morning Herald