The GDP numbers don’t add up – Tim Colebatch writes in the Melbourne Age that yesterday’s GDP figures are certainly wrong. But for now, we don’t know which of its figures are wrong – and so we don’t know Australia’s real rate of economic growth. Sorry, but that’s the truth.

Australia, US call on China for war games – The US and Australia will invite China to join three-nation military exercises to allay concerns about China’s military ambitions and pave the way for stronger diplomatic ties – Sydney Morning Herald

Workers and bosses ‘worse off’ as IRC forces award delay – Yhe Rudd government’s award overhaul will be delayed by six months, after the Australian Industrial Relations Commission admitted the revamp would increase costs for employers and potentially cut the take-home pay of workers – The Australian

Gillard’s pledge exposed by wages umpire – Employers and workers could be worse off under a plan to modernise awards, the industrial umpire has ruled, in a direct contradiction of Workplace Relations Minister Julia Gillard – Melbourne Age

John Della Bosca – the two-minute man – Denied a “pair” by the Opposition, which would have allowed him to escape Sydney and attend to his personal crisis without reducing the Government’s voting numbers, the former health minister was forced to remain at work – Sydney Daily Telegraph

Bingo: Della’s lover steps into spotlight – Meet Kate Neil, the glamorous young bingo winner who brought down a health minister and unleashed one of the biggest political tragicomedies the state has seen – Sydney Morning Herald

Support for John Della Bosca’s rehabilitation despite affair – The Australian

New law demands police checks for childless couples – Would-be parents are outraged at new laws forcing them to prove they are not pedophiles or child abusers before they undergo fertility treatment. Victorian IVF clinics have started asking patients to submit to police checks ensuring they are fit to be parents – Melbourne Herald Sun

No visas, boys? Welcome to Australia – The Rudd government last night moved to overturn John Howard’s controversial policy of processing all asylum-seekers off-shore, allowing a group of detained Afghan youths to leave Christmas Island and arrive on mainland Australia without visas – The Australian

The recession we hardly had – Mark Kenny in The Adelaide Advertiser writes of the strong GDP result vindicating the Government’s extraordinary stimulus spending and the Reserve Bank’s aggressive mortgage interest rate cutting drive which has seen 4 percentage points knocked off the official cash rate in the last 12 months.

Gillard’s plan will shackle economy – Michael Stutchbury argues that a more flexible labour market has played a big role in this miracle performance from Australia’s modern economy. So why on earth would we reimpose the old-world industrial relations system that used to so shackle the economy? – The Australian

The big cash splash – Dennis Shanahan in The Australian writes that even if Australia stays on top of the developed world economically, the Rudd government is not going to cut back on its stimulus spending – it can’t, politically or economically.

Turnaround still requires restraint – Alan Wood in The Australian says for Australia far better the problems thrown up by rising national wealth and prosperity than the alternative, but don’t kid yourself it will be an easy or a painless ride.

TV the most right wing medium – Newspapers are left wing, television is right wing, and the media as a whole tends to favour the Coalition, according to a study of coverage while John Howard was Prime Minister. And surprisingly, according to researchers from the Australian National University, the ABC Television news is the most pro-Coalition of them all – Sydney Daily Telegraph 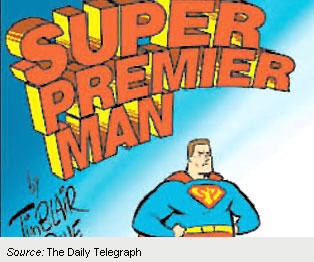 The comical state of NSW – So you think Nathan Rees came from out of nowhere to lead NSW Labor? Today’s Sydney Daily Telegraph has a comic-book take on how he came by his powers and why he thinks he has the staying power for the next election

Concern over caffeine energy drinks’ impact on children – Five NSW pupils have had serious side effects, including dizziness, nausea and heart palpitations, after taking “shots” of a high-caffeine energy drink on the way to school – Adelaide Advertiser

Smart-card proposal to combat NZ obesity – Health economist Des O’Dea and colleagues have suggested the Government set up a smart-card electronic subsidy system that would be similar to the food stamps now given to low-income families in the United States on an electronic debit card. It would be aimed at reducing “food insecurity” and encouraging consumption of healthy foods – New Zealand Herald

Are these guys crackers? – NT WorkSafe crews were trying to blow up out-of-date crackers and flares in an incinerator at the NT Government’s explosive reserve at Hidden Valley when it all went horribly wrong – Northern Territory News

Paparazzi warned about new laws protecting Princess Mary – Following hectic scenes during Princess Mary’s holiday back in her home state last year, Tasmania Police legal advisers have advised officers there are several sections under the state’s Police Offences Act that can be enforced to protect her and her young children’s privacy – Melbourne Herald Sun