One minister saved from snow, other out in the cold

Fat, salt will be exposed on labels under new proposals – Melbourne Herald Sun

Interest rates on hold, but rise push grows – The Australian 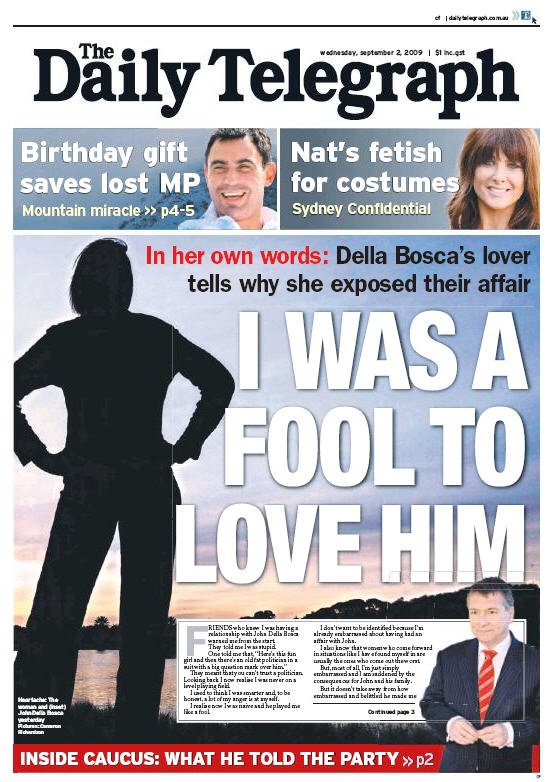 How a woman scorned her ministerial lover – Sydney Morning Herald

Infidelity bolsters Neal’s grip on seat – If there is anything positive for Belinda Neal after revelations of her husband’s infidelity, it is a growing sentiment in the ALP that she should keep preselection for her seat of Robertson – Sydney Morning Herald

I was a fool to love him, Della Bosca’s lover says – If he is capable of lying to his wife and children – and John really does love his sons – and of manipulating a woman into believing he actually loves her, then why wouldn’t he do that in other aspects of his life and career? – Sydney Daily Telegraph 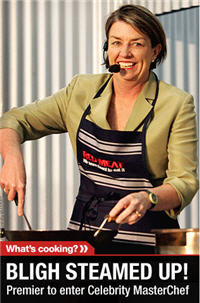 Anna Bligh to enter Celebrity MasterChef – It is understood Ms Bligh accepted Ten’s offer to appear onCelebrity MasterChef in a bid to plug Queensland produce. She will line up alongside stars including Vince Colosimo, swimmer Eamon Sullivan, INXS’s Kirk Pengilly and Miss Universe Australia Rachael Finch. Ms Bligh’s looming appearance on the program could prove a massive circuit-breaker for the Premier who has battled plunging support since winning the March State election. Brisbane Courier Mail

Fantasies of pizza in freezing wilderness for Tim Holding – The Australian

Sex romps bad for the health portfolio – Tony Wright in the Melbourne Age reckons John Della Bosca, the powerful NSW Labor figure whose interests include bushwalking, according to Who’s Who, must wish today he’d gone walking in a blizzard with Tim Holding. At least everyone would be sympathising with him and inquiring about his health.

Paying the cost of a mid-life crisis – David Penberthy in the Sydney Daily Telegraph writes that the general test is that the public only care about the private conduct of politicians when it affects their ability to do their job. John Della Bosca abandoned his public duties on the frontbench because his private life has gone off the rails. As he said yesterday, this has become a distraction for a government that cannot afford any more distractions – Sydney Daily Telegraph

Tax fix is a nasty habit – Neil Mitchell in the Melbourne Herald Sun writes that if Kevin Rudd is seduced by the 300 pages of social-engineering strategy that sit on his desk he will become the Super Nanny of Australian history.

As you give Della a kick, remember his successes writes former Premier Bob Carr in the Sydney Morning Herald

Muslim Aussies must win the war on the home front – Associate Prof Shahram Akbarzadeh, deputy director of the National Centre of Excellence for Islamic Studies at the University of Melbourne, writes in the Melbourne Herald Sun that Muslim scholars and educators carry the burden of alerting Muslim youth to the folly of Islamic radicalism.

Prevention: a track record to die for – Simon Chapman in the Sydney Morning Herald explains that prevention receives a tiny fraction – generously, some 2 per cent – of the resources we give to the sick and dying. But economists have long argued spending on preventing disease should not be seen as a cost but an investment, as a healthier population is more productive.

Stevens signals panic has gone – Michael Stutchbury in The Australian writes that the hint from Glenn Stevens may be guarded, but the Reserve Bank is still on track to start lifting interest rates before Christmas.

Spare the goat and let us vote – Annabel Crabb wonders what NSW Opposition Leader Barry O’Farrell would have to do, exactly, to get a gallop in the media these days? Intimacy with a goat probably would not do it. Not on its own, anyway. The goat would have to be pregnant, and willing to talk. This is not an ideal state of affairs. None of it is. And there is only one way to stop the madness: a swift, brutal and – ideally – immediate recourse to the democratic process – Sydney Morning Herald

Stimulating role reversal – Shaun Carney in the Melbourne Age says our politicians are taking unusual positions in search of the economic high ground with the Opposition talking things up and the government talking them down.

Under fire on the front line – Ian McPhedran writes how an Australian Army Chinook “Brahman” helicopter had a lucky escape earlier this week when a U.S. patrol base came under mortar attack – Adelaide Advertiser

China firing up again – Chinese demand for Australian raw materials is expected to remain strong, after its manufacturing grew at its fastest pace in eighteen months – Melbourne Herald Sun

Big four banks have all the mortgages – Melbourne Age

Britain admits it is not green enough, reveals poll – The poll shows majority support for individual action, including fitting low-energy lightbulbs or turning down heating – The Guardian, UK

The public’s right to know – The editorial in the Sydney Daily Telegraph makes the case that while public figures deserve private lives this should not allow public figures to escape serious examination when matters that are usually private spill over into the public realm.

Channel Nine’s still the one to annoy viewers – It has already lost a critical part of the ratings race to rival Seven, but don’t expect Nine to boast about its latest poll prize – as Australian TV’s most unreliable network. An online survey has delivered more unwelcome figures for Nine, with viewers voting overwhelmingly against its poor programming and “contempt” shown for the station’s audience – Sydney Daily Telegraph

Dog given parking ticket – The blue heeler was tied to a fence outside Rapid Creek market when it was approached by two Darwin City Council traffic wardens. One of the inspectors wrote out a ticket – and taped it to the dog’s lead – Northern Territory News

Plenty of jobs going if all the unfaithful were to quit – If every person resigned after having an affair, ”there would be a lot of empty offices”, says a psychologist, Clif Evers. The University of NSW lecturer cautioned against taking the moral high ground in the Della Bosca incident – Sydney Morning Herald

Why risk your baby? health experts ask Brian Lake – Bulldog Brian Lake is risking his unborn daughter’s health by inducing her birth so he can play a football final, experts have warned – Melbourne Herald Sun

Cross-border abortion as state acts – Pregnant, with her unborn baby dying in her belly, Shay yesterday joined the sad procession of Queensland women to cross the state border to access medical abortion services that have been withdrawn due to an impasse between the Bligh government and doctors – The Australlian