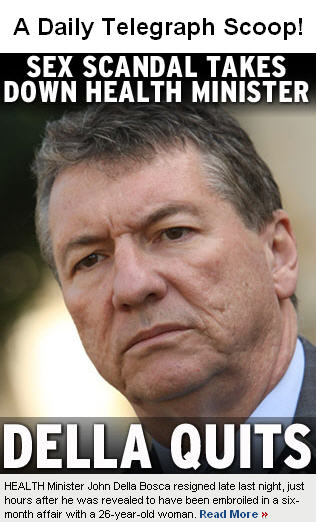 Della Bosca quits after sex scandal – The Health Minister, John Della Bosca, resigned last night after revelations he had an affair with a 26-year-old woman ended hopes he had of becoming premier – Sydney Morning Herald

Interest rate genie on the rise – The Treasurer, Wayne Swan, has been playing down the strength of the economic recovery before the publication tomorrow of growth figures that could prompt the Reserve Bank to start increasing interest rates – Sydney Morning Herald

Kevin Rudd trapped by error: Malcolm Turnbull – has warned that Kevin Rudd has condemned Australians to needless debt by making the “political error” of promising a new building for every primary school in the country – The Australian

Premier to cabinet: focus on our aims – Nathan Rees told his cabinet yesterday to focus on the achievements and aims of the Government in the first week back in Parliament, during which the Government is expected to reveal the details of the proposed sale of electricity retailers – Sydney Morning Herald

Missing minister Tim Holding tipped to be Labor leader – Determination youth and a steel-trap mind for facts and figures have seen Tim Holding make a meteoric political rise.
The passionate Cats fan has been a State Government minister for seven years, but only celebrated his 37th birthday less than two weeks ago. The Labor Party wunderkind came a long way before getting lost on Mt Feathertop – Melbourne Herald Sun

‘Land bribe’ exposes Labor’s coziness with property developers – In his withering 33-page decision, Judge David Lloyd never mentions the $143,500 Rose Group donated to the Labor Party in the lead-up to the last NSW election. But he does something more. He describes what happened at Catherine Hill Bay as a ”land bribe” – Sydney Morning Herald

Former premier paid for lobbying – Former Liberal premier Dean Brown has received more than $400,000 over the past two to three years to lobby on behalf of the state’s drought-stricken communities. A senior Liberal MP, who did not wish to be named, said the lobbying register proposed by Premier Mike Rann had one glaring omission: the need to register lobbyists retained by the Government – Adelaide Advertiser

Hunters hold Nathan Rees to ransom – Premier Nathan Rees has offered to let hunters into national parks to shoot feral animals on a trial basis in exchange for support in the Legislative Council to reverse the ban on publishing school leagues tables. But the Shooters Party said they will reject all Government Bills until it agrees to support plans for the hunting of feral animals in national parks and the creation of a game park in NSW – Sydney Daily Telegraph

Some bitter, others sweet over housing – In the first three Northern Territory communities to receive new houses and refurbishments under the $672 million Strategic Indigenous Housing and Infrastructure Program, a mixture of gratitude and resentment greeted the release of yesterday’s review into the program – The Australian

Dry lives without crime – Controls imposed by government on alcohol consumption in indigenous communities in Queensland have been the single most important reason why crime has decreased markedly and the lives of women and children have improved, according to District Court judge Michael Forde, who retired last week – The Australian

India to open university sector to Australia – On the first official day of a five-day visit to India yesterday, Deputy Prime Minister Julia Gillard said the two countries had agreed to regular ministerial talks that would involve representatives from Indian and Australian universities and industry on ways to build collaboration – The Australian

Enter the young conservatives – Gerard Henderson in the Sydney Morning Herald says Brendan Nelson’s resignation from politics also provides Turnbull and the Opposition with an opportunity. A reasonable result in Bradfield would give Turnbull the chance to re-establish some authority in the lead-up to the next federal election.

Questions mount on PM’s spending – Dennis Shanahan believes there is an opportunity for the Coalition to argue that Labor panicked, spent too much borrowed money on non-productive building and has left an unwarranted legacy of debt – The Australian

Hats off to the big spenders – Tim Colebatch in the Melbourne Age reckons the issue that now needs examining is what oppositions should do when governments implement sensible policies.

Dinosaurs block the road to change – Malcolm Colless in The Australian argues Communications Minister Stephen Conroy must ignore the temptation to meddle, something his predecessors were unable to resist. Otherwise his dream for a brave new broadband world could well become his worst nightmare.

Labor the competition party? – Michael Stutchbury believes it’s a crucial time for the Rudd government’s policy direction. Does it believe in the Hawke-Keating model of enterprise-driven opportunity and prosperity? Or has it regressed to its base interventionist instincts, blending misplaced Whitlamesque idealism with the cynical politicking of modern Labor? – The Australian 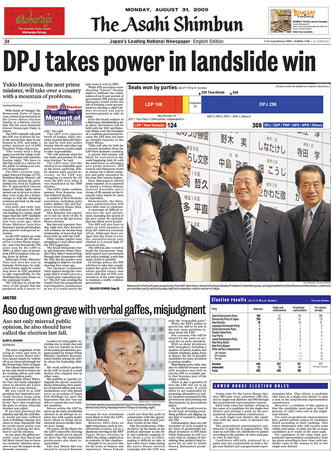 Lower House gets facelift: More women and newcomers – A record number of female candidates and a significant number of rookie politicians won Lower House seats thanks to the overwhelming election victory by the Democratic Party of Japan on Sunday – Asahi Shimbun

Settler burden weighs on Israel – Jason Koutsoukis in the Melbourne Age looks at the financial cost to the Israeli Government of the West Bank settlements.

Upheaval in the wrong direction – Peter Hartcher in the Sydney Morning Herald sees a problem in Japan. The new party of government, the Democratic Party of Japan, is promising more welfare capitalism, not less. The change Japan needs is not the change the party is offering. Nor is it change the country can afford. 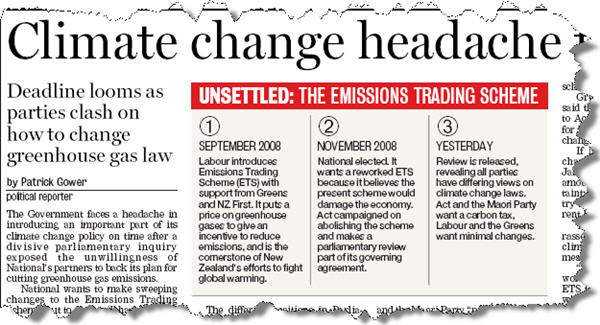 Pakistani drowned during reality TV contest – A contestant on a Pakistani reality TV show drowned while performing a challenge for the programme, a spokeswoman for the show’s sponsor said on Sunday. Contestant Saad Khan, 32, was swimming across a lake while wearing a 7kg backpack when he called out for help and then disappeared underwater, according to Fareshte Aslam, information officer for Unilever Pakistan, the show’s sponsor – Dawn, Pakistan

Eddie McGuire in the hot seat for Triple M – McGuire’s show, The Hot Breakfast, will take on the long-time No. 1 team at 3AW – Ross Stevenson and John Burns – Melbourne Herald Sun