The pick of the news from Saturday morning's media

Doctor out of the house: Nelson’s final diagnosis – Peter Hartcher of the Sydney Morning Herald gets a farewell message from Brendan Nelson that describes Malcolm Turnbull as having a narcissistic personality.

Bishop treated unfairly: Nelson – The retiring Brendan Nelson talks with Michelle Grattan and says he thinks Julie Bishop is being treated very unfairly by some of her colleagues – Melbourne Age

Brumby ‘wasting millions’ on ads – ohn Brumby is under fire for spending millions of dollars on a taxpayer-funded pre-election advertising blitz promoting his Government’s economic performance during the global financial crisis. The Opposition has branded the $4 million campaign a blatant misuse of public money to “spruik” the Government in the lead-up to next year’s election and is urging the Auditor-General to investigate – Melbourne Age

Sport rort claims go to CMC after mum cries foul – Community sports projects deemed “high risk” won millions of dollars in taxpayer grants on the eve of the last state election and 82 per cent of the cash went to Labor electorates. The Crime and Misconduct Commission has been asked to investigate allegations of rorts and favouritism because $23.6 million went to Australian Labor Party seats and only $5.2 million to non-ALP seats – Brisbane Courier Mail

Rudd cash plan hits the roof – The Federal Government is on the back foot over its $42 billion stimulus program, admitting dodgy deals in its home insulation roll-out the day after it revealed a cost blow-out in the school building program – Melbourne Age

Malcolm Turnbull link to Godwin Grech fee deal – Grech, the Treasury official at the centre of the fake email affair, proposed a fee deal to the merchant bank running the OzCar fund whose chairman was a key backer and personal donor to Malcolm Turnbull. The effect of the deal was to enable Credit Suisse, the bank hired by Treasury to implement OzCar, to maintain its $5 million in fees, despite the fund being scaled back from $2 billion to $1.3bn – The Australian

Federal police drop AWB investigation – fter a review of the evidence by senior barrister Paul Hastings QC, who declared the prospect of convictions was limited and “not in the public interest” – The Australian

Political lobbyists to be registered in Victoria – Melbourne Age

New code reins in lobbyists – The SA State Government will restrict the activities of political lobbyists to guard against corruption, cronyism and conflicts of interest – Adelaide Advertiser

Award revamp splits business as supermarkets and stores disagree – Independent supermarkets and Queensland tourism operators have accused Julia Gillard of “betrayal”, declaring the Rudd government had failed to address concerns about the financial impact of Labor’s award overhaul – The Australian

‘Spare us a wailing wall’: Noel Pearson – The national Aboriginal representative body proposed by Social Justice Commissioner Tom Calma would not tackle the real crises in Aboriginal affairs, and would be little more than “a blackfellows’ wailing wall” – The Australian

Private schools win cash bonuses – Private schools in Australia will receive up to $23 million each in overpayments over the next four years because of the Rudd Government’s commitment to a deal that John Howard struck. Some NSW schools will receive up to $15 million more than their entitlement under a funding formula that measures need according to the socio-economic status of the school community – Sydney Morning Herald

Julia Gillard – from Teflon coating to feet of clay? – Laurie Oakes in the Brisbane Courier Mail finds that suddenly the Deputy Prime Minister’s competence is being questioned.

Emissions trading scheme parallels US healthcare reform – Dennis Atkins in the Brisbane Courier Mail looks at the difficulties of selling complex ides to the public.

Stimulus an item of faith – Paul Kelly in The Australian writes that the Rudd government’s $42 billion fiscal stimulus has now been exposed for its inefficiencies, cost overruns and lack of “value-for-money”, yet Australia’s economic trajectory will enshrine Labor’s fiscal and monetary stimulus at the heart of its 2010 re-election campaign.

Bishop’s bad move – The Australian‘s foreign editor Greg Sheridan believes that during the past six months the Liberals seem to have abandoned all political values in foreign policy.

Come election day, Rudd and co may get a lesson in the folly of self-aggrandisement – Tony Wright in the Melbourne Age questions how clever it is to insist that schools receiving federal funds from the stimulus package put up signs saying so

We need Rees like a hole in the head writes Miranda Devine in the Sydney Morning Herald. Rees’s only qualification for the job, according to one of many detractors in his party, is that he was a “westie” and not a “wog”, 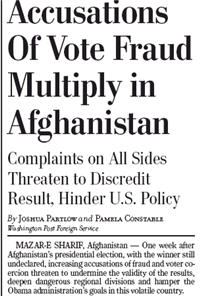 Abuse Issue Puts the C.I.A. and Justice Dept. at Odds – The tension between the agencies complicates how the administration handles delicate national security issues, particularly the tracking and capturing of suspected terrorists overseas. It also may distract Mr. Obama, who is trying to move beyond the battles of the Bush years to focus on an ambitious domestic agenda, most notably health care legislation – New York Times

Hambali off hook over 2002 Bali bombings – Hambali, the terrorist mastermind believed to be behind the Bali bombings, is set to escape justice for his role in the 2002 attacks that killed 202 people, 88 of them Australians – The Australian

Could Afghanistan Become Obama’s Vietnam? – Peter Baker in the New York Times says the L.B.J. model – a president who aspired to reshape America at home while fighting a losing war abroad – is one that haunts Mr. Obama’s White House as it seeks to salvage Afghanistan while enacting an expansive domestic program.

New-look Telstra back on track – John Durie in The Australian advises forgetting the gloomy outlook statement from Telstra – the company is doing just fine as it emerges from its revolutionary transformation, focusing on customer satisfaction and still vowing to protect shareholder interests whatever demands the government may make.

Moving ahead by investing in news – The Australian will take another bold step forward next week with the launch of new sections, new features and a second magazine.

Julia Gillard out to make the grade with kids – Is Julia Gillard smarter than a 5th grader? TV viewers will find out on Monday night when the Deputy Prime Minister appears on the Channel 10 quiz show Are You Smarter Than A 5th Grader? – Melbourne Herald Sun

Cancer on rise as births delayed – The number of women diagnosed with breast cancer during pregnancy or soon after giving birth has almost doubled since the 1960s, and researchers say cases will continue to rise as women have children later in life – Melbourne Age

Obstetrics and IVF fees soar – Obstetricians and IVF specialists have increased their fees by more than 20 per cent in the past year, Medicare figures reveal, in a move the Government has slammed as an irresponsible grab for public cash – Melbourne Age

It’s all white at wine award night – Penfolds Yattarna chardonnay was named wine of the year at the Hyatt/Advertiser SA Wine of the Year Awards.last night – Adelaide Advertiser

Flood of drivers with no licences – Almost 45,000 WA motorists were caught driving without a licence last financial year, including 8650 who never had one in the first place, new police statistics reveal – The West Australian

Old fans show support for Cousins – Although the 2005 Brownlow medallist now wears the yellow and black guernsey of Richmond, he was greeted with a mammoth cheer from the Subiaco Oval crowd when the Tigers ran on to the ground to take on West Coast tonight – The West Australian