Brendan’s out but so is Buddy and he’s devastated

Nelson hands Turnbull his toughest test – Malcolm Turnbull’s leadership is to face its stiffest test yet with a byelection in the safe north shore seat of Bradfield, caused by the shock early resignation of his predecessor, Brendan Nelson – Sydney Morning Herald

Has anyone seen Premier Nathan Rees? – The Sydney Daily Telegraph reports that Nathan Rees’ Rees’ own staff yesterday made the stunning admission they don’t know where he is, as a key Labor powerboker told the embattled Premier his leadership is over.

Loyal to the end – Publicly Brendan Nelson has been the soul of discretion and the model of tight-lipped loyalty since he was tipped out of the federal leadership of the Liberal Party by Malcolm Turnbull in September last year. A class act, in short, but one that must have taken considerable effort – The Australian

Indigenous body won’t be another ATSIC – A representative body to be announced tomorrow will be independent of government, include women and have advisory powers only – Sydney Morning Herald

Employers taken to task on back pay – Underpayments to roofers, hairdressers, shop assistants and vet assistants have been exposed after complaints to the State Government and workplace inspectors – Sydney Morning Herald

Holden to axe hundreds of white-collar jobs – Hundreds more jobs are to be axed at struggling car maker Holden in the coming months, with most set to be lost from Victoria and its Port Melbourne headquarters – Melbourne Age

How finding a job is a 10-week task – The Bureau of Statistics says 10 weeks is the typical length of unemployment for men. For women, it’s nine weeks – Melbourne Age

MP Michael Johnson says torture OK, then quickly backtracks – A political row has erupted after federal Liberal backbencher Michael Johnson said there was a place for torture so long as it was done “in an appropriate way” – Brisbane Courier Mail

Nelson ahoy – now who will float the boats of Bradfield? asks Annabel Crabb in the Sydney Morning Herald

Electorate waits to punish NSW Labor’s incompetence – Mark Coultan writes in the Sydney Morning Herald that the Rees Government’s insistence on a metro rail line to Rozelle is probably the greatest white elephant of recent times, easily dethroning that other pachyderm, a desalination plant no one wants and we do not need. That was a mere $1.9 billion down the drain. The Rozelle metro will cost $5.3 billion.

Left to its devices, it’s their ABC – Peter Costello remembers his treatment at the hands of the national broadcaster – Sydney Morning Herald

Another headache for leader – Dennis Shanahan in The Australian

Earnest and bland, but still a good bloke – Drew Warne-Smith in The Australian reviews a political career

Rhetoric fails to tell whole story – Janet Albrechtsen in The Australian writers that increasingly, Fair Work appears to represent a dramatic overreach. And though the business community has been slow to react and even slower to pick fights with a government known to be vindictive, it seems the full horror of the new regime is starting to dawn on it. Even worse, workers will end up bearing the brunt of Labor’s IR hubris.

Nationals find cause for survival – Paul Kelly in The Australian writes that split between the Liberals and Nationals on climate change has two consequences: it shatters the unity of conservative politics, and inaugurates a populist and sectional campaign against the Rudd government on the assumption it is vulnerable in regional Australia. 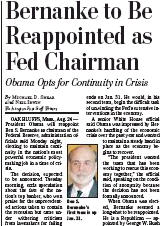 White House Sharply Increases Deficit Projection to $1.6 Trillion – The federal deficit will soar to nearly $1.6 trillion this year, miring the nation in the deepest pool of red ink since the end of World War II, the nonpartisan Congressional Budget Office and the White House reported Tuesday – Washington Post

U.S. Raises Estimate for 10-Year Deficit to $9 Trillion – The Obama administration, citing an economic downturn that has been deeper than it had first thought, raised its estimate on Tuesday of the government’s deficit over the next decade to $9 trillion from $7.1 trillion – New York Times

$20m to go to rebranding Australia – Taxpayers will outlay $20 million over four years on a new brand to promote Australia, seeking a new logo and tagline to boost our image and trade in the world – Melbourne Age

Dredging damage mocks Premier’s praise – A week after Premier John Brumby feted the dredging project oft Phillip Bay for its ”exemplary” environmental performance, a report has shown the impact of loose rockfall at the entrance has been worse than the Port of Melbourne predicted – Melbourne Age

PM condemns violence at home – As Labor MPs rallied around a colleague who was allegedly assaulted by her partner, the Minister for Women, Tanya Plibersek, said more needed to be done to stop domestic violence – Sydney Morning Herald

Fair crack of the whip: a racing sore point – punters and owners, jockeys and trainers, stewards and animal-rights activists are mired in controversy over the type of whips to be used and, more confusingly, over when, where and how often they may be cracked – Sydney Morning Herald

Arts move draws howl of protest – Former state arts ministers have launched an unprecedented protest against the highly controversial merger of the Victorian College of the Arts with Melbourne University. Every living former ALP and Liberal arts minister has written to the university’s vice-chancellor, Glyn Davis, arguing the merger threatens the VCA’s role in the arts community and seeking a meeting with him to voice their concerns – Melbourne Age