Gillard to rescue of school building program – Education Minister Julia Gillard was forced to step in to save the $14.7 billion school building program from bureaucrats who threatened to derail the centrepiece of the federal government’s economic stimulus package by delaying payments to schools for projects already under way – The Australian

Enough: Prominent Victorians hit out at Melbourne’s violence – A chorus of prominent Victorians demands MPs and police work together to save our city from thugs and hooligans. The plea for urgent action comes after city leaders were stung by a first-hand account of the mindless violence by Herald Sun senior journalist Mike Sheahan – Melbourne Herald Sun

Hello, hello: big brother cops an eyeful – Police would be given more access to the inner-city closed-circuit TV network for ”general intelligence gathering” and ”police operations”, under rules proposed by the City of Sydney – Sydney Morning Herald

Foreign students reported for absence, unsatisfactory results – Thousands of overseas students each year are reported to the Federal Government’s international student compliance watchdog for failing their courses or not turning up for lectures and tutorials – Brisbane Courier Mail

Turnbull needs to learn from Whitlam – The Liberals are in danger of being split over an ETS the way Labor was split over communism, and unless someone modernises the party it faces long years in opposition, says Nick Dyrenfurth in The Australian

Not all cultures are good – Australia is multiracial but it should not be multicultural, contends Barry Cohen in The Australian

Recovery now, but it may cost us heavily later – The stimulus spending has worked so far, but long-term debt may rebound on the government, writes Politcal editor Dennis Shanahan in The Australian

Battle for East Timor fought in Canberra’s corridors – The new film Balibo tells only part of the story of the Indonesian invasion, writes Paul Monk in The Australian

White fellas in the black – Andrew Bolt in the Melbourne Herald Sun writes of of a booming new class of victim you’d never have imagined we’d have to support with special prizes and jobs. They are “white Aborigines” – people who, out of their multi-stranded but largely European genealogy, decide to identify with the thinnest of all those strands, and the one that’s contributed least to their looks. Yes, the Aboriginal one now so fashionable among artists and academics

Banks deliver less than super retirement returns – High-profile uperannuation funds operated by some of the nation’s savviest bankers have delivered some of the worst returns on investment in recent years, according to the first comprehensive snapshot of Australia’s $1 trillion superannuation industry – Melbourne Age 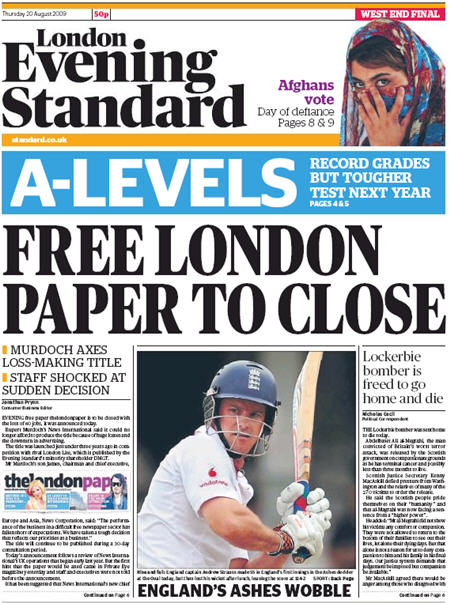 Free paper to shut after ‘most difficult year’ for Rupert Murdoch – Evening free paper thelondonpaper is to be closed with the loss of 60 jobs, it was announced today – London Evening Standard

Goodbye Kyle. Goodbye Jackie. Hello Hi-5 – Shock jocks Kyle Sandilands and Jackie O have had their national prime-time show replaced by a former Hi-5 member in the wake of a backlash from advertisers – Adelaide Advertiser

Ruling to shift abortions interstate – Queensland women facing the trauma of a medical abortion will have to cross the border for the procedure because the state’s biggest hospital has scrapped its service, forcing the state government to review its controversial laws on abortion – The Australian

Bets on for ‘our’ Rachael – The Miss Universe Australia finalist, who had a lucky escape from a 5m croc in the Territory, is an equal favourite with NT bookmakers to win the international competition – Northern Territory News