An Australian version of the FBI?

FBI model considered – Spy agency ASIO could be expanded into an FBI-style organisation that targets a range of threats, such as organised crime and border security, under plans to redefine its mission for the first time since the end of the Cold War – Melbourne Age

China envoy flies home – Australia’s ambassador to China has rushed back to Canberra for high-level meetings about reviving the ailing relationship, as Beijing stepped up its anti-Canberra rhetoric – Melbourne Age 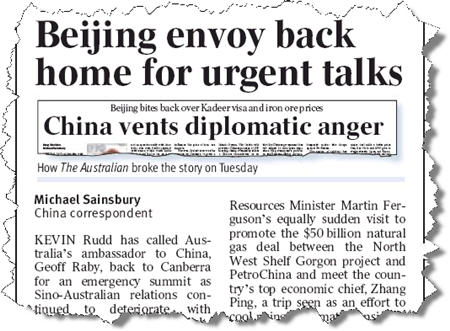 Beijing envoy back home for urgent talks – The Australian

Gillard offers olive branch after farmers protest changes – Julia Gillard is preparing to intervene in another industry facing spiralling costs from Labor’s overhaul of awards, after the horticulture sector warned the revamp would send thousands of fruit and vegetable businesses across the country to the wall – The Australian

$1.8b program puts patients at risk – Hospital patients’ lives could be put at risk from overdoses or wrong medication, experts warn, if the ambitious timetable for the Government’s e-Health plans mean computer-generated prescriptions are introduced without adequate training and support for staff – Sydney Morning Herald

State income tax in reform mix: Henry – Treasury Secretary Ken Henry has called for a complete overhaul of federal finances, with the possibility that states will be allowed to levy their own income taxes – The Australian

IMF calls for capital gains tax on property – The Australian

Nationals talk of terminating Coalition with Liberals – The Australian 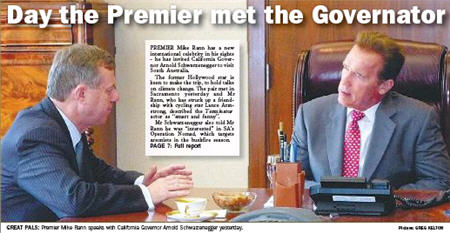 Governator would like to visit Down Under – Adelaide Advertiser

Anti-drinks man ordered to leave town – Being partner to the local mayor’s cousin wasn’t enough to protect Daniel Bracegirdle when he challenged Aurukun Shire Council over calls to reopen its notorious beer canteen: after spending a decade in the remote north Queensland township, he was told to pack up and get out – The Australian

The Mad Uncle’s Liberabble – Dennis Shanahan in The Australian says frustration over being in opposition, resentment at the dominance of Kevin Rudd and his ability to win good publicity, divisions over personnel and policy and general demoralisation boiled over yesterday and made the Coalition look a shambles.

Stimulus must stop when we get out of the woods or else – Alan Wood warns that if the government fails to wind back spending as the economy recovers, the Reserve Bank will raise interest rates – The Australian

Slice of pie for building is shrinking by the day – Natasha Robinson comments in The Australian on delays in providing promised new housing for Aborigines.

Australia on the Gorgon’s back – a deal of rare beauty – Annabel Crabb in the Sydney Morning Herald on the terrifying powers of Labor’s Gorgon. 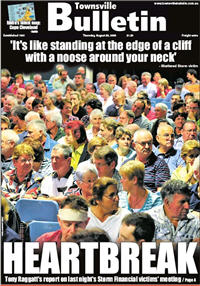 BoQ faces Storm test – Lawyers will launch legal action alleging unconscionable conduct against one of the key lenders in the Storm Financial debacle today, a meeting of more than 500 investors in the failed wealth advisor was told last night. While the lender, Bank of Queensland, has consistently denied any wrongdoing, Slater and Gordon lawyer Damian Scattini accused the bank’s North Ward branch of being a ‘rat’s nest’ – Townsville Bulletin

Qantas profit dives 90pc as it slashes cost by $1.5bn – The Australian 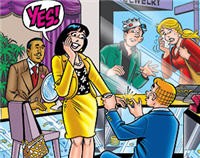 Arch Rivals: As Archie Sidles Up to a Bride, Why Does The Betty-vs.-Veronica Debate Ring Eternal? – So this is how the end begins. When it comes to affairs of the heart, we are gathered here today to bear witness that Archie Andrews — that long-iconic teenager of Riverdale High, that sputtering chassis of eternal chastity — is a complete and utter jughead. After nearly 70 years in one of popular culture’s most celebrated threesomes, Archie is about to ask Veronica — that shallow, conniving, materialistic tease — to marry him – Washington Post

Scientists Develop Intelligent Coffee Mug – Materials to keep drinks cold or hot for longer have been around for quite a while. Now a pair of German scientists has come up with a high-tech mug they claim keeps coffee at the perfect temperature – Der Spiegel