Quote of the day:

Neil Young, QC, arguing for Crown Casino that pathological gambling did not mean a person lacked control over their actions.

Money talks in China deal – Australia will supply $50 billion worth of liquefied natural gas to China over the next 20 years in the nation’s biggest ever trade deal. The deal came as Foreign Minister Stephen Smith yesterday confirmed that China had cancelled a vist from a senior official in retaliation for Australia granting a visa to exiled Uighur leader Rebiya Kadeer – Melbourne Age

Piping hot: $50b gas deal with China shows the resoources boom is far from over- Sydney Morning Herald

Behind the bars with the Rio four – Zhang Peihong, lawyer for one of the imprisoned Rio four, says his client has not been abused, he has not been tortured and nor has he been asked to write any form of self-confession – Melbourne Age

All guns turned on Turnbull – Kevin Rudd has launched a multi-pronged attack on Malcolm Turnbull’s judgment, in a bid to put the Opposition Leader to the political sword in the wake of the OzCar affair – The Australian

NSW Premier Rees on slide as voters lose patience: Newspoll – than half of voters have become dissatisfied with the performance of NSW Premier Nathan Rees, according to the latest Newspoll – The Australian

Big challenges ahead for next ICAC chief – A respected 71-year-old judge in the Court of Appeal, who has served part-time in Fiji’s Supreme Court and been a critic of long and complex litigation, will become the next commissioner of the state’s anti-corruption watchdog – Sydney Morning Herald

Dragon is cross, but it’s business as usual – Peter Hartcher in the Sydney Morning Herald asks is it possible for a medium-sized country to stand up to an angry China politically and still do a booming trade with the difficult dragon and answers yes, as the Rudd Government has just demonstrated.

A blow for equality, but sexist whingers need their ears boxed – Jacqualine Magnay in the Sydney Morning Herald on the IOC decision to make women’s boxing an Olympic sport.

Ferguson fires up Asia’s interest in Gorgon project – Matthew Stevens writes in The Australian that Martin Ferguson’s dash through Asia’s gas markets has boosted his standing in the Australian resources sector, given the impetus it has helped to create for the next big thing in energy, Chevron’s $50billion Gorgon liquefied natural gas project.

Tale of final straws and camel backs – Rowan Callick argues in The Australian that China as launched a two-track strategy to manage its increasingly strained relationship with Australia, encouraging investment to continue while freezing out Canberra on the official front.

PM’s stand on Beijing pleases Obama – Greg Sheridan reckons today that the Rudd government may be in bad odour in Beijing, but its steady management of the quite serious crisis in Canberra-Beijing relations has won discreet but high praise from the Obama administration in Washington – The Australian

Coober Pedy’s great leap backward – Life for many Aborigines is patently worse than it was 50 years ago, writes John Pasquarelli in The Australian

Kabul locks down in fear of Taliban – Sydney Morning Herald

Palin’s Red Menace – Richard Cohen in the Washington Post on how Sarah Palin has turned health-care reform into her own form of McCarthyism.

MacBank in $250m airport gain – Macquarie Group is poised to book $250 million in revenue on the sale of its management rights of Macquarie Airports, with about half that amount likely to go directly to Macquarie Group staff – Melbourne Age 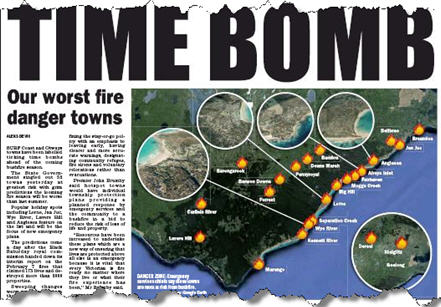 Witch bank? The Reserve, of course – The Reserve Bank of Australia paid $500,000 to a self-styled ”white witch” to oversee an ultimately disastrous workplace overhaul at its bank-note printing company – Melbourne Age

Revealed: What’s in the Tigers’ tank – Three Wests Tigers rugby league players – including their captain, Robbie Farah – were photographed at training using their secret weapon in the race to the finals: masks to inhale an artificial oxygen mixture to help recover from injury – Sydney Morning Herald

Industry told to shape up as obesity rate climbs – The Rudd Government’s preventive health taskforce is believed to call for the diet industry to be regulated in a report completed last month. The move follows evidence that many people on weight loss programs stack the kilos back on when the diet ends – Melbourne Herald Sun

Government to crack down on fad diets – Sydney Daily Telegraph

Instead of imposing a tax to recover our economic stimulus package just launch the Debt Disaster Appeal and raise another $900m as we did for the Asian Tsunami.