There’s one very obvious difference between news in a newspaper and news on a website. In the morning newspaper things are static for 24 hours. Corrections or explanations to a story have to wait until the next day. On the website news is an immediate thing – updates and/or corrections can happen immediately they are learned of. Unless, of course, the website is run on newspaper hours with no one in the office on a Saturday when there is no upcoming Sunday edition.
The website of the national daily The Australian is clearly in the part time category. Yesterday morning the printed paper ran with this extraordinary beat-up as its page one lead: 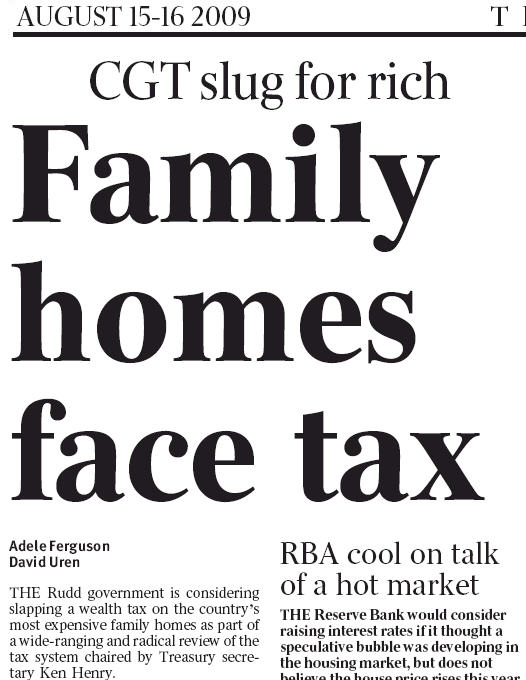 Saturday morning was still young when Treasurer Wayne Swan’s office released a statement denying the Government was considering the tax. “There has been no request from the Government to the Australia’s Future Tax System review to model such proposals,” the statement said. “We are advised that no such modelling is being carried out by the review, and therefore no recommendation of this sort will be made to us by the panel.” The Government is not considering and “will not” consider the policy outlined in the report. “There will be thousands of stories between now and when the final report is released and unfortunately, like this one today, many of them will be incorrect.”
That was just about as complete as a denial could be and it was featured appropriately at the top of the news,com.au website: 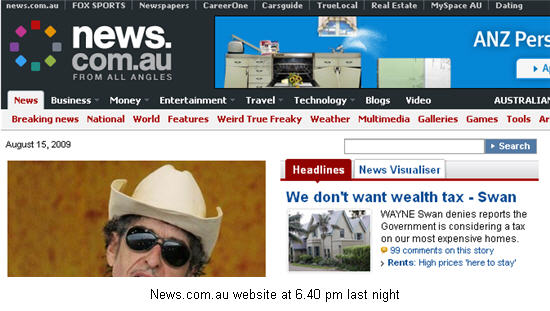 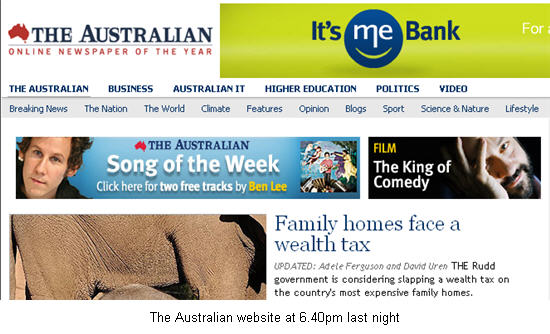 ALP set for early, post-Turnbull poll – THE Labor Government is preparing to fight an election against Tony Abbott or Joe Hockey and has bluntly warned senior political advisers to get ready or go home – Melbourne Sunday Age

Call for inquiry into board jobs for ALP money men – The State Opposition yesterday called for an inquiry into the private business arm of the Queensland Labor Party, claiming a possible conflict of interest by directors who also serve on government boards and corporations. Labor Holdings Pty Ltd generates millions of dollars from share and property investments for party campaign war chests, with more than $4 million of donations in the past three months alone – Brisbane Sunday Mail

Threat to lift class sizes – SA State school class sizes are being primed for a potential increase next year, in some cases by as many as 11 extra students – Adelaide Sunday Mail

Labor stooges blow hot air on emissions – Piers Akerman in the Sydney Sunday Telegraph writes how courtesy of the ABC television program Q And A, I have been given a precious insight into the heart of the global warming scam and here’s how it works: lies and obfuscation and total confusion.

No-bull warrior – the case for Malcolm Turnbull – Charles Waterstreet in the Sydney Sun Herald concludes Yes, we are a lucky country to have a quality Opposition Leader and not just another mediocre opportunist. With Turnbull on board, Rudd will need to keep both hands on the rudder.

Why Gillard will follow the leader – The PM and his deputy have an understanding on the leadership, writes Paul Daley in the Sydney Sun Herald

High time we started looking to a new age – Lisa Carty writes in the Sydney Sun Herald that some members of the Opposition are apparently advocating the shove for deputy Liberal leader and health spokeswoman Jillian Skinner, 65, on the basis of her age alone. There would be only one legitimate reason to relegate Skinner to the back bench and that would be because she was not doing her job. But she is doing her job and making a pretty good fist of it

‘Barbaric laws’ reverse Afghan women’s rights – Afghanistan has quietly passed a law permitting Shiite men to deny their wives food and sustenance if they refuse to obey their husbands’ sexual demands, despite international outrage over an earlier version of the legislation that President Hamid Karzai had promised to review – Melbourne Sunday Age

Our richest survive $5.5b loss – Brisbane Sunday Mail finds it has been a whirlwind year for Queensland’s wealthiest with more than $5.5 billion cut from the combined worth of the state’s 100 richest individuals and families

Rudd splits bill to wedge Libs – Glenn Milne writes in the Sydney Sunday Telegraph that Kevin Rudd is calling Malcolm Turnbull’s bluff on climate change, with a surprise agreement to some Opposition demands on the Emissions Trading Scheme

Radical fertility bid – A 47-year-old Melbourne woman has had radical surgery that may make her a first-time mother – and part of medical history. Eight years after having “slices” of her ovaries removed, frozen and stored, Lisa had them reimplanted last month in the hope of becoming pregnant – Melbourne Sunday Herald Sun

The Family cult’s secrets exposed – Melbourne’s Sunday Herald Sun goes back to interview the leader of Australia’s most notorious cult, The Family, who remains unrepentant two decades after the raid that shocked the nation.

Kennett: why I acted over suicide story – Jeff Kennett began his crusade against the publication of stories about suicide long before he took 60 Minutes to the Supreme Court last week to prevent it from airing a report on a cluster of teen deaths at a Geelong high school reports the Melbourne Sunday Age

Victoria’s taxi shame – The shameful state of Victoria’s taxi industry has been exposed in official documents detailing widespread rip-offs, attacks on passengers and even drug use and drinking among drivers – Melbourne Sunday Herald Sun

Lives wrecked by teachers – A growing number of teachers are failing their students, ethically and emotionally, by engaging in inappropriate conduct and relationships, the Brisbane Sunday Mail has found.

Fears of Hendra virus mutation – Queensland Government scientists have discovered that the deadly Hendra virus is different from region to region in Queensland, with fears that it could mutate into an even more dangerous form – Brisbane Sunday Mail

Most Aussies drink four coffees a day – Australians are more addicted to caffeine than to any other substance, with research showing many people enjoy the equivalent of four cups of coffee a day – Melbourne Sunday Herald Sun

The dark side of teeth whitening – A boom in teeth whitening has prompted calls for the unregulated industry to be closed amid fears staff in shopping malls, beauty parlours and tanning salons are carrying out the potentially dangerous treatment without proper training – Sydney Sun Herald

Typical rubbish from The Oz, peddling Liberal Party propaganda. I used to subscribe to this rag but gave it away a few years back when it turned into a Liberal Party version of Pravda …

What a farce! A leftist liberal ingrate disingenuously and ironically accusing the MSM in this country of Liberal Party bias.

The Australian made the mistake several years back of editorialising a response to an evermore ridiculous train of Crikey taunts of bias and so gave more publicity to Crikey than it ever had before. Unsurprising to see Crikey never let a week go by without repeating the means by which it achieved it’s singular glory.

Of course accusations of bias from the pages of Crikey is hypocrisy defined and would be staggering were it not for the fact that it is rare not to see leftist bias in any single edition of Crikey.

JamesK, If you cant see the Liberal Party bias in the Oz then Ive got a bridge to sell you. Its a nice one right in the centre of Sydney. Very cheap. Just one owner. The reality is that the Oz is a mouthpiece for the liberal party which is a travesty as it is the only national paper in the country. All Limited News products have a bias against the progressive side of politics, just look at Fox News labelling Obama a Nazi for wanting to bring universal health care to America, despite the US suffering appalling (for a developed country) rates of infant mortality, maternal mortality and lack of longevity amongst its citizens. Of course, if anyone has a differing opinion they are a nasty pinko leftist, arent they JK…

BTW, that story is still up on the Oz website…

re; Charles Waterstreets missive on Turnbull,

Thats what we all thought Charles but wheres the beef?