Where have all the salmon gone? A fisheries catastrophe 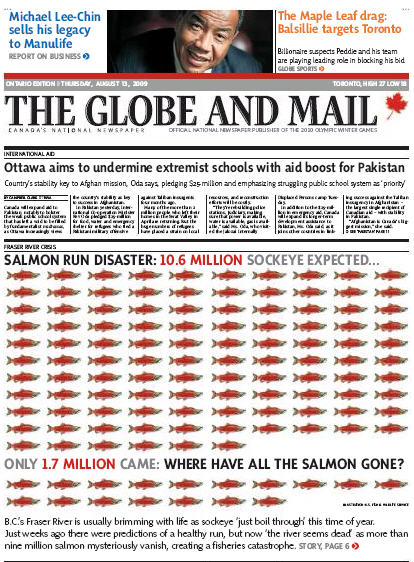 Fraser River’s salmon stocks ‘beyond a crisis’ – The mysterious collapse of the B.C. sockeye run has dashed hopes raised just weeks ago of a good return this year. Between 10.6 million and 13 million sockeye were expected to return to the Fraser this summer. But the official count is now just 1.7 million. Where the nine to 11 million missing fish went remains a mystery – Toronto Globe & Mail

Chiefs go in public sector purge – Kevin Rudd has finally moved to put his own stamp on the leadership of the public service, appointing five new departmental secretaries including new heads of defence, foreign affairs and finance – The Australian

Stimulus architects get their desserts – Finance Department secretary Ian Watt, promoted to run Defence, and David Tune, who will take over from Dr Watt at the Finance Department, were promoted because they had impressed the Prime Minister with their work on the government’s budgets and economic stimulus packages – The Australian

Former diplomat secures top job – Hugh Borrowman’s former post as the Department of Foreign Affairs and Trade’s top official in the Department of Prime Minister and Cabinet was yesterday filled by Patrick Suckling, a man who spent 15 years working up the DFAT ladder – The Australian

Time bomb for Turnbull – The Federal Government will reintroduce its bill to establish an emissions trading scheme before Christmas, forcing the Coalition to either support it then or risk fighting an early election on climate change – Sydney Morning Herald

More than $6bn of crisis funds unspent – About $6.3 billion, or 30 per cent of Kevin Rudd’s stimulus payments, is still sitting in consumers’ bank accounts and could help to prop up retail spending in the second half of the year – The Australian

Shonky schools face reckoning: Baird – The $15.5 billion-a-year international education industry is likely to shrink as shonky operators face their ”day of reckoning”, says the head of a Federal Government review of its future – Sydney Morning Herald

Heffernan in hot water – Liberal senator Bill Heffernan created a further headache for his friend and leader, Malcolm Turnbull, when Senator Heffernan was forced to defend comments made to gay rights activists and a rude gesture in the Senate chamber – Melbourne Age 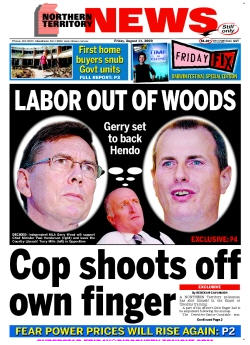 Ruthless Rudd sets Turnbull’s clock ticking – Dennis Shanahan in The Australian says that while the Prime Minister has been acting from a ruthless position of political strength and policy unity in bringing forth his emissions trading scheme to put a higher cost on carbon, and therefore use price to cut greenhouse gas emissions, the Liberal leader has been operating from a position of leadership weakness and policy division.

Coalition needs to get in on action – Rudd government has just failed to implement one of its most important election promises but it is the Coalition that is feeling the pressure. That’s the fate of weak oppositions – Lenore Taylor in The Australian

Corruption watchdog for federal MPs long overdue – Greens Leader Bob Brown writes in the Sydney Morning Herald that the current political culture in Australia decrees that if you hand a minister $10,000 in a paper bag marked ”for you” in return for a talk about your business plans, it is a bribe. But if you hand the $10,000 to a party official to sit next to the minister at dinner and discuss your business plans, that is OK. It is a sham. Democracy is being eroded by money.

Law of war hides from rule of law – Richard Ackland in the Sydney Morning Herald writes that it’s nice that the great lumping discussion paper on freshening up security laws, the 60th birthday of the Geneva Conventions and a new round of official finger-wagging about plea bargaining have all arrived on our doorstep at the same thrilling moment.

Still far from pulling ‘trigger’ – Michelle Grattan in the Melbourne Age warns us that the ETS debate might seem to have gone on for ever, but there is a lot more of this story to run.

Liberals finally stand up for the leader they have to have – Michelle Grattan in the Melbourne Age says Malcolm Turnbull’s small wins fail to mask his ongoing problems.

Freedoms are losing out to fear – Nicola McGarrity writes in the Melbourne Age that proposed changes to anti-terrorism laws fail to find a balance between human rights and protecting citizens.

Recession over for Germany, France – The Australian

B&B directors breached duties: says report – Babcock & Brown directors may have breached their duties and the corporations law by operating the investment bank while it was insolvent, and failing to get shareholder approval for a $40 million loan to controversial broker Tricom Equities – The Australian 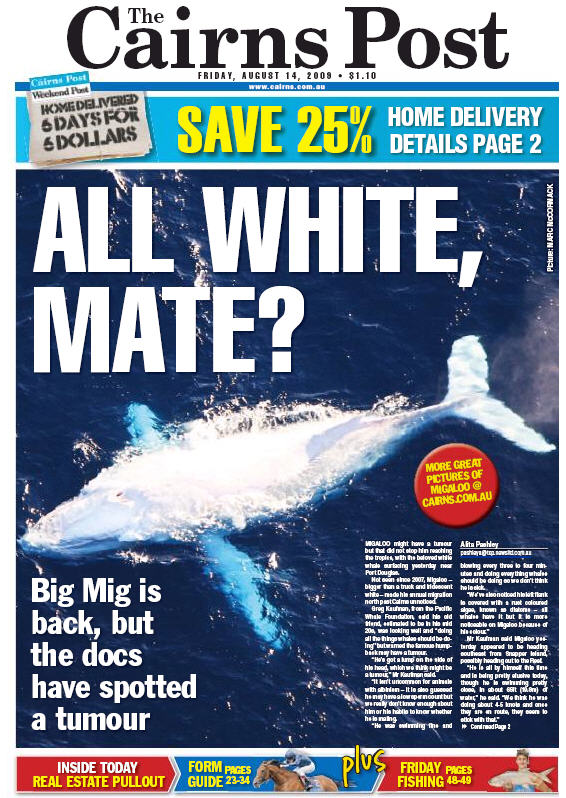 White whale Migaloo back in Far North – Migaloo might have a tumour but that did not stop him reaching the tropics, with the beloved white whale surfacing yesterday near Port Douglas. Not seen since 2007, Migaloo – bigger than a truck and iridescent white – made his annual migration north past Cairns unnoticed – Cairns Post

Ministers could split energy bill – Renewable energy plans, including subsidies for domestic solar panels, could be in place much earlier than expected because the Rudd government is considering altering its climate change plans in the Senate – The Australian

Farmers seek level playing field for exports – Australia’s rural woman of the year, Victorian dairy farmer Roma Britnell, believes the Rudd government’s proposed Carbon Pollution Reduction Scheme would spell disaster for Australian dairy farmers and drastically undercut their ability to compete in an international export market, even if agriculture were not included under the scheme – The Australian

Krill may give seal of approval to new fishery – Puzzling over what drives a pregnant fur seal to cross the Southern Ocean in winter has led to new evidence of the critical role of krill in Antarctica, just as a fishery in the crustacean looks likely to take off – Sydney Morning Herald

Shooters’ claim goes to ACCC – Conservation groups have complained to the Australian Competition and Consumer Commission about the Game Council of NSW, saying it is using false advertising – Sydney Morning Herald

Developers, miners attack heritage laws – Mining and development groups have condemned proposed fines of up to $1.1 million for destroying indigenous heritage in NSW, saying the new laws are unfair, will hold up development and could mean innocent company directors would be prosecuted – Sydney Morning Herald

The threat from rising sea levels