World War II themes – Kokoda and the sinking of Sydney

Pilot in PNG crash had six months’ experience – The Australian

Lifetime top-up proposal for those retiring on small super payouts – Sydney Morning Herald reports people retiring with modest superannuation payouts could ”buy” a lifetime top-up to the age pension from the Federal Government under a plan being examined by the Henry review of tax policy.

Lawyers see glimmer of hope in Hu charges – China has changed course from accusing the Australian Stern Hu of stealing state secrets to charging him with commercial espionage and taking bribes. This provides a potential circuitbreaker in the fraught relationship between the two countries but places the detained Rio Tinto executive in a new predicament – Sydney Morning Herald

You can take your pick from these two versions of Labor’s planned changes to terrorism laws!

Rees in hands of Joe the gymnast – The future of the Premier, Nathan Rees, rests largely in the hands of the state’s most reviled politician, Joe Tripodi, whom senior Labor sources suspect is showing signs of shifting his support, giving further weight to the push to get rid of Mr Rees – Sydney Morning Herald

‘Mandarins’ on roll in public service reshuffle – Some of of Canberra’s most senior public officials are set for new roles, with the Rudd Government planning a reshuffle of its mandarins – Melbourne Age

Aboriginal crisis spreads to west – The paralysis engulfing Aboriginal housing in the Northern Territory has spread to Western Australia, with the Barnett government admitting a $496million federal injection will not fix the crisis – The Australian

New houses sit vacant in the Tiwis – The Australian

CLP plans big changes to House – The Country Liberals have announced a raft of parliamentary reforms it will introduce – if it takes over government. Ahead of tomorrow’s vote on a motion of no confidence – that could bring down the Labor Government – the Opposition yesterday revealed its plans if the vote goes their way – Northern Territory News

Plan to change Pu njab Place to Oak Tree Place ‘racist’– A race row is brewing in the quiet cul-de-sac of Punjab Place at Logan, south of Brisbane, as 32 residents petition to change the street’s Indian name – Brisbane Courier Mail

Metro shapes up for an own goal – The proposed West Metro train between the city and Parramatta could wipe out two of the most popular sporting venues in Sydney, a draft environmental impact statement for the project has revealed – Sydney Morning Herald

Finding the right balance after 9/11 – Patrick Walters in The Australian says Robert McClelland has produced a necessary and broad-ranging set of amendments to Australia’s counter-terrorism legislation.

The pull of the track continues to inspire – Peter Fitzsimons in the Synday Morning Herald writes there are few bigger challenges than the Kokoda Track, but its pull is irresistable.

Wake up, Australia, and smell the hubris – Annabel Crabb in the Sydney Morning Herald on the Government’s bully boy approach

It’ll take two terms, so use the time well – Stephen Loosley says Malcolm Turnbull has the herculean task of endeavouring to recover from a dissatisfaction rating of more than 50 per cent. This figure, and not Rudd’s huge lead as preferred PM, is the most devastating figure for the Opposition Leader. Rarely does a political leader return to the positive side of the ledger. Fifty per cent plus suggests strongly that the voters have made up their minds – The Australian

Brumby is putting on the blinkers – For John Brumby, the cash-for-access debate is personal. The key to understanding why the Premier has got himself into an embarrassing tangle on this issue is to know that the organisation at the heart of it all is one of Brumby’s babies – Melbourne Age 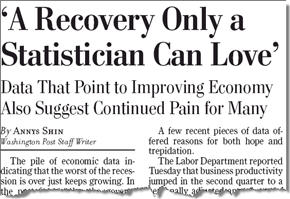 ‘A Recovery Only a Statistician Can Love’ – The pile of economic data indicating that the worst of the recession is over just keeps growing. But the same data also explain why any recovery isn’t going to feel like one anytime soon for millions of Americans. Its existence will be confirmed by statistics, but, over at least the next year, the benefits are unlikely to materialize in the form of higher wages or tax receipts or more jobs. “It’s going to be a recovery only a statistician can love,” Wells Fargo senior economist Mark Vitner said – Washington Post

Japan poll rivals clash in TV debate – The televised debate, which neither leader dominated and in which both stuck to their party’s chosen election themes, came ahead of the formal launch of campaigning next week for Japan’s August 30 general election, which opinion polls suggest could spell the end of the LDP’s long rule over the world’s second largest economy – Financial Times of London

Pakistan nuclear sites under threat – Terrorists have attacked three of Pakistan’s military nuclear facilities in the past two years and there is a serious danger that they will gain access to the country’s atomic arsenal, according to a journal published by the US Military Academy at West Point – The Australian

Uighurs must fight for rights within China – Greg Sheridan in The Australian writes that Rebiya Kadeer, president of the World Uighur Congress, needs to see her immensely successful visit to Australia as a template for how she should campaign throughout the West. The most important lesson she must learn from her time here is that she and the Uighur movement must definitively abandon any quest for a separate state.

Doubters attend lecture as ETS bill heads for doom – Malcolm Turnbull’s battle to negotiate a deal on climate change will begin today, after the Senate votes to kill the Government’s legislation to establish an emissions trading scheme – Sydney Morning Herald

Turnbull will negotiate ETS later – Malcolm Turnbull has promised to negotiate with the government on its Carbon Pollution Reduction Scheme later in the year, after the Coalition votes against it today – The Australian

Captain ignored intelligence – The commander of HMAS Sydney inexplicably ignored intelligence that there were no friendly merchant vessels in the area when he encountered the disguised German raider Kormoran off the West Australian coast on November 19, 1941, a commission of inquiry found yesterday – The Australian

Just one sip is too much for teens – Parents who let their teens sip champagne at a relative’s wedding or give them a glass of wine over dinner are setting them on a path to binge drinking, a leading psychology professor said yesterday – Sydney Daily Telegraph

A footy betting scandal to greet the finals