ANU climate change expert Professor Will Steffen has responded to Senator Steve Fielding’s climate sceptic claims with an open letter slamming the position advanced by Fielding in June after returning from a greenhouse denialist conference in the United States.

Fielding sought and obtained a meeting between Climate Minister Penny Wong, Chief Scientist Penny Sackett and Steffen to argue that the evidence for climate change was in dispute. Fielding attended the meeting with prominent climate sceptics such as Bob Carter and Stewart Franks, and claimed that evidence showed there was no global warming and carbon was not responsible for climate change.

Fielding subsequently asked that Steffen attend a presentation to senators with Carter, which Steffen has declined.

In a savage assault on the credibility of Carter and his fellow sceptics, Steffen tells Fielding:

… you state in your letter that ‘it is important that all Senators are given the opportunity to hear both sides of the debate…’ In terms of the relationship between carbon dioxide (and other greenhouse gases) and global warming, there is no debate in the climate change research community. That the Earth’s surface is warming is unequivocal, and there is also strong agreement amongst the vast majority of climate change scientists that anthropogenic emissions of greenhouse gases… are the primary cause… The counter argument put forward by Professor Carter and his colleagues do not constitute the “other side of a scientific debate.” In fact, based on the written documentation that I have seen… these counter arguments do not constitute credible science. These documents demonstrate a serious misunderstanding of climate science and processes for assessing that science; they also contain violations of the fundamental principles of sound statistical analysis. In addition, there are numerous example of flawed logic, misleading and inaccurate statements, and confuse and inconsistent analyses. In my professional opinion and experience, science students at the ANU would be expected to much better than this.

Steffen points out that there is no peer-reviewed material that refutes the main findings of the Intergovernmental Panel on Climate Change, and invites Fielding to visit ANU to discuss climate change. 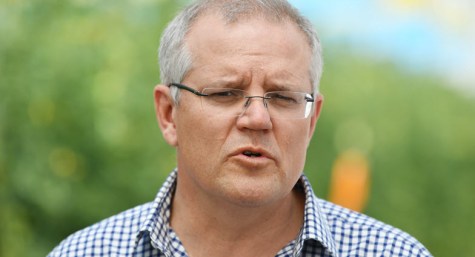 I can’t believe, given Fieldings background in engineering, that he displays the stupidity that he does on this issue.

It seems to me that climate change “deniers” do so out of some philosophical bent and make the mistake of assuming that advocating climate change is also a philosophical stance. It is not, it is a matter of the balance of scientific opinion and an overwhelming balance at that.

To deny anthropogenic climate change is to deny the validity of the entire peer reviewed scientific process in all matters of science, not just climate change!

Fielding displays extreme stupidity in almost everything! Regardless of his claimed “background in engineering” – I am led to believe that he represents some religious factional bloc of voters called Family First. By their very nature all of these people would be rabidly ” creationist ” in their beliefs about how the Universe actually works and thereby knee-jerk in denial of the scientific evidence of the harm Mankind and industry continues to inflict on our island Earth. Creationism is totally ” anti-science “. In his trenchant opposition to scientific fact, Fielding is simply reverting to type. Perhaps he thinks some voodoo deity will just reach-out from the remotest reaches of some far galaxy to wipe away our polluting, Earth destroying sins and make it all better? Like redneck, Bible-bashing Republicans in the US and their eerily similar radical Muslim brothers in certain other countries – Fielding is a living, breathing embodiment of the harm to a just and fair democratoc society that ” religion ” does. We are supposed to have a ” secular ” State – these superstitious cranks have no place in the decision-making on Earth’s fragile future.

Well said Wiseguy. I get a distinct impression of a certain level of snide cyniscm from the ‘deniers’ I’ve come across.

I don’t think Fielding falls into this category though. My impression is that he is merely parroting what he has heard from others without reall understanding the underlying issues, causes or the basic scientific principles that underline the research (or lack thereoff for the deniers).

Philip, what sort of background in engineering has Fielding got? I can’t believe that anyone so moronic managed to achieve any reputable qualifications. I may be wrong but I think he has voted against every single issue put up by the government and compounds this by pretending he knows what he is talking about. He has to parrot what he has heard from other people, usually right-wing rednecks, because he hasn’t a thought of his own.