Liberals ponder how low they can go

THE NEWSPOLL NUMBERS FROM THE AUSTRALIAN 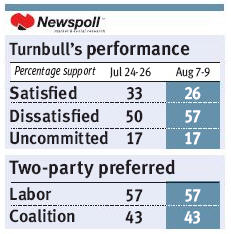 China’s $120bn Rio spy claim – alleges Rio Tinto stripped $A123 billion from the country through a six-year program of commercial espionage, as it signalled it will broaden its spy blitz beyond the four mining employees detained in Shanghai – Melbourne Age

Police poised for new street search powers – Horrified by police reports that children as young as 10 are arming themselves with knives, Premier John Brumby will introduce legislation before the end of the year to give police tougher move-on and random search powers – Melbourne Age 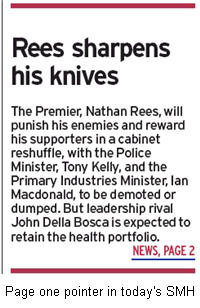 Warnings, hints and threats flood in on the good ship Turnbull – In a crucial week for the Opposition Leader, Malcolm Turnbull will confront a divided party room and tough policy choices on climate change and health – Sydney Morning Herald

Tuckey to ask leader for respect – backbencher Wilson Tuckey plans to demand undertakings from Malcolm Turnbull about his conduct, including that he show ”some respect” to the party room. Mr Turnbull’s leadership is under great pressure, but there is no challenger – Melbourne Age

Spending through dip in confidence – a new sense of optimism is beginning to help lift the national shopping spirit, despite uncertainty about jobs.  – Melbourne Age

Debt a threat to growth, says IMF – The IMF’s annual review of Australia has issued a sharp warning for the first time that the high and rising levels of household debt and net foreign debt make it vulnerable to a sudden collapse in the confidence of global investors – Melbourne Age

Youth face bleak job future – Queensland’s youth is at risk of ending up on the scrap heap of the long-term unemployed, with the jobless rate hitting 19 per cent for 15 to 19-year-olds – Brisbane Courier Mail 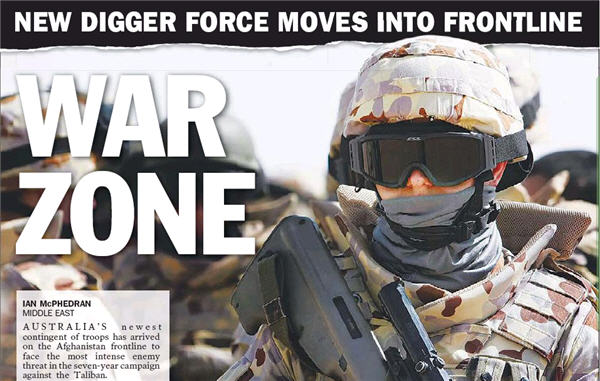 Why unemployment won’t rise this time – Ross Gittins in the Melbourne Age says it appears Australians are working fewer hours, which beats losing their jobs.

Malcolm looking to baseline as a lifeline – Lenore Taylor in The Australian hopes modelling by Frontier Economics gives him a “positive” message on climate change even as the Coalition prepares to vote the Rudd government’s emissions trading scheme down.

IMF sees problems here even after global crisis passes – Michael Stutchbury says the Treasury and the Reserve Bank insist that the IMF is “too pessimistic” in refusing to endorse the budget’s forecasts that, after a slow start, the recovery will build a head of steam, sustaining half a decade of 4-4.5 per cent annual growth from 2011-12 – The Australian

Cutting out cronies – Glenn Milne writes in The Australian of the Liberal determined to clean up the mess of campAign finance and lobbyists.

Every which way, the Liberals lose – Dennis Shanahan writes in The Australian that everyone knew today’s Newspoll would be a disaster for Malcolm Turnbull, and it is.

Taliban chiefs fight to death – Pakistan’s Taliban appeared in turmoil after reports of a deadly shootout between contenders to replace the shadowy movement’s leader, believed to have been killed in a US drone attack – The Australian

Another cash injection crucial – Joseph E. Stiglitz, professor of economics at Columbia University, writes in the Melbourne Age that what is needed now is another dose of fiscal stimulus. If that does not happen, we can look forward to an even longer period in which the economy operates below capacity, with high unemployment. It is a mistake to look only at a country’s liabilities and ignore its assets

MasterChef, Packed To The Rafters, Border Security are TV’s most watched – Sydney Daily Telegraph reports that Australian-made dramas and reality TV shows are kicking ratings goals, while major sporting events have run out of puff. 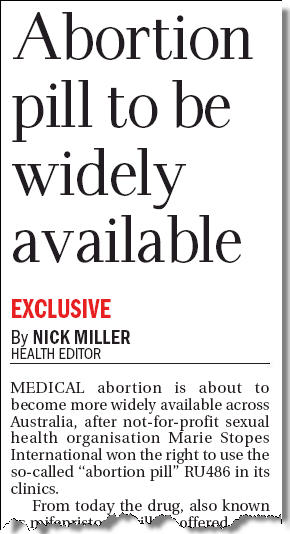 Abortion pill to be widely available – It will be used only at less than nine weeks’ gestation, under prescribing and import rights granted by the Therapeutic Goods Administration. Marie Stopes said the TGA had relaxed rules compared with previous prescribing rights – Melbourne Age

Fee of $10 for myki cards – Passengers using the new myki smartcard in regional Victoria were overcharged 10,800 times in the ticket system’s first four months of operation. And as the launch of the $1.3 billion ticket system nears in Melbourne, it is also now clear that travellers will be expected to pay a $10 fee for the microchipped card, on top of normal ticketing charges – Melbourne Age

Indigenous at more risk of swine flu – The Australian

Respect Wilson Tuckeys political nouse he did try to save us from Howard
by plotting his replacement with Andrew Peacock because he thought Howard was unelectable.
Now he wants to replace Peacock Mk2 with Andrew Robb a dourer version of Howard.

I thought this service you provide had gone!
My only real linkage to Crikey is via the daily email newsletter and I haven’t seen a link to this stuff on that.
Is it possible for Crikey to send subscribers an email with a link to this.
I know that’s a little lazy but I often don’t get to look at these for a week or two and this is a great way to catch up.

A daily link sent to the mailbox would also make it very convenient to pick up old pages.