Our new-media loving Prime Minister Kevin Rudd showed himself to be more typing twit than technical top dog in a patchy attempt at a live web chat about climate change today.

Prime Minister Kevin Rudd might like to portray himself as a nerdy tweeting geek, but his typing leaves a lot to be desired. Which may not normally be an issue — with a team of spell checkers and advisers to fix those slip ups — but today, in his live web chat on climate change, it was clear that he was alone and seriously lacking in tech-savvy skills.

Yep. We’re not sure exactly what he meant here either with his opening comments. Nearly a thousand people contributed to climate change?

The 20 participants with Kevin Rudd in the chat were people taken from commenters on a blog-post about climate change the PM wrote in mid July.

But while the sentiment may have been there — see how well online political engagement worked for Obama — Rudd was a slow and messy typist.

Luke33: Perhaps to start – What will the proposed ETS legislation under consideration this week deliver to the average Australian?

17 people commented and asked questions before Rudd was able to type a response.

PM: Now to Luke 33. The CPRS leg in parlt this week is about three things. Giving effect to our national commitments.Giving business certainty now for the future re the rules And for households certainty also for assistance measures for the impact on the cost of energy. kr

At least it clearly was Rudd doing the hard yards though — making obvious mistakes like pressing ‘enter’ and automatically submitting a comment before he finished.

Ten comments followed in quick succession before Rudd was able to finish his response, including this helpful hint:

r1nce: I feel your pain PM, you can’t press [enter] without the comment being submitted. Try using notepad, then paste it into this box…

PM: re liqidlce. surely we have to tackle both the supply and the demand side. The conventional wisdom seems to be that if we get serious about energy efficiency measures across the board, we can cut ghgs by up to 30 pr cent. then there are the critical supply side measures. and giving a carbon price through the cprs is critical to both.

You can just imagine how agitated the usually eloquent and well-prepared PM must have been getting — accidentally pressing enter, typos aplenty, new comments popping up continuously, complicated questions on the government’s response to climate change.

This photo of Kevin hurriedly typing on his laptop at his desk which accompanied the web chat simply adds to the madness: 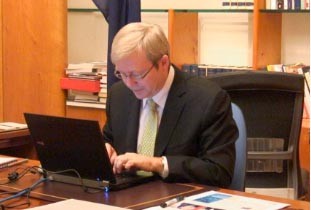 Our humble leader even invented some new words, like ‘mandation’:

PM: On the building code that fearlessCAT raises, the National Strategy on Energy Efficience agreed with the states will see us mandation six star rations for homes and commercial buildings through the code. Also with thr states increasing standards for appliances.

While many participants were writing 100-150+ word questions and comments, Rudd’s replies stayed mostly around the 50-word mark.

The Prime Minister was obviously well aware of his limited typing prowess, even throwing in an apology to his children:

PM: By the way, becasue I am chatting myself and my typing skills are a toal embarassment to my kids, lets extend this session another twenty minutes. OK?

It seemed by the end of it, participants were talking and debating amongst themselves, almost ignoring the PM’s comments. That’s when Rudd wasn’t ignoring their questions, difficult ones about how the government will deal officially with climate change sceptics, if Australia will push higher emission reductions targets, exactly what will happen with coal, and so on.

But of course, he didn’t waste an opportunity to push the great changes his government has brought in:

PM: Back on energy efficiency, ideas re working from home and less business and govt commuting. One of the reasons we are laying out a nationa high speed braodband network is to make all that more possible. and with the states, we have agreed a Telepresence system which means we can stay in our capitals and meet via videolink. One small step for mankind etc….

Even if the typos do take something away from the potency of the argument.

PM: Again on energy efficiency, you may not be aware of nour national green car plan which isbuilt on a 1.3 billion dollar green car innovati0on fund. One of the aims is to produce an Australian made hybrid.Much more to do.

Unfortunately, Crikey couldn’t access the entire the chat. But thanks to a fail whale message from the PM Connect Team, it was obvious that we weren’t the only ones being logged out.

“There have been some reports of various access errors, connection time-outs and problems with cookies. We are still learning our way with the live web chats and apologise for the inconvenience.”

Nevertheless, although Kevin Rudd’s web chat was flawed and filled with typos, at least he is attempting to actively engage with the nation on climate change, using new media, and interacting with voters. Even if does scream ‘election campaigning’, we applaud him.

Your Say: Consent the key issue in conversion therapy debate

This article spent more time dissecting typos than actually analysing the questions &
responses. It is the kind of commentary you write when you have no knowledge of the actual subject at hand. Swing and a miss.

The PM is a two-finger hunt-and-peck typist pretending to be a tech-savvy dude. This is worth commenting on as an example of duplicity

it must certainly be painful for a man using many complex terms to have to actually type them out. given that most policiticians go for consistent repetition of pre-prepared statements, i think he would most certainly have been served by some pre-prepared phrases he could just copy and paste in at short notice. and yeah, mark, i’m sure the issues are important and no doubt covered elsewhere but this article is all about the medium not the message. Take your victory dance over ignorant journos elsewhere – it’s undeserved.