Leadership battles are exploding all over the country today. We survey the best of the morning's media coverage.

Suspect seen at Puckapunyal – A member of the accused Melbourne terror cell was recently spotted near one of the country’s most important army bases at Puckapunyal in central Victoria, police allege – The Australian

Nationals join dash for sponsor cash – Businesses are being asked to fork out $100,000 for the privilege of gold sponsorship for the National Party’s federal council meeting this month at Canberra’s upmarket Hyatt Hotel – Melbourne Age

Brumby defiant on ALP fund-raiser -J ohn Brumby will be the star attraction at a controversial ALP fund-raiser today where business leaders will pay thousands of dollars for one-on-one meetings with him and cabinet ministers – Melbourne Age.

Libs to tighten donation policy – The SA Liberal Party wants to cut companies out of political donations and to limit personal donations to $1000 – a policy that may put at risk the $3.7 million it raised last year – Adelaide Advertiser 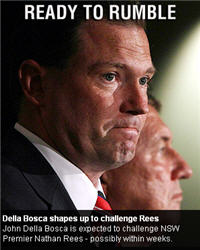 Libs urged to stick with Turnbull – The Liberal Party is in a state of paralysis over its leadership. There was a near unanimous view within the party yesterday that Malcolm Turnbull was in deep trouble but no one knew what to do about it because there was no standout alternative candidate – Sydney Morning Herald

Libs still spinning around – Michelle Grattan in the Melbourne Age writes that the Opposition is in disarray, its leader failing to connect with voters – and then there’s the problem of Costello.

Mooney lobby row – Cairns retailers want probe on former mayor – but the former mayor, Tony Mooney, says his ‘conscience is totally clear’ after opponents of a Cairns shopping development called for an investigation into his involvement in council negotiations – Townsville Bulletin

Public servants instructed to zip it – Public Service Commissioner Lynette Briggs has weighed into the OzCar affair, saying that officials should not meet the Opposition before Senate committee hearings without permission – Melbourne Age

Bosses cutting hours to save jobs – Jacob Saulwick in the Sydney Morning Herald ponders just who is cutting back on time at work.

Business is booming among cafe society – Australia is defying the global downturn with strong growth in employment last month, raising the prospect that the economy will keep growing throughout the rest of the year – The Australian

Contract builders to ‘make killing’ – Lzrge construction companies are set to “make a killing” out of multi-million-dollar contracts in Aboriginal housing, while local black tradesmen remain idle and unable to gain access to construction contracts – The Australian

Anderson’s mall push for early poll – Two days after she quit Labor, shocking her colleagues and setting the Northern Territory government on the edge of collapse, Alison Anderson was in a cheerful mood yesterday – The Australian

A chance to counter terrorism – Cynthia Banham in the Sydney Morning Herald argues that if the post-September 11 years have taught us anything, it’s that civilised societies will not defeat terrorism by tearing down their own values.

Say it like you mean it, we love a bold leader – According to Oliver Hartwich in the Sydney Morning Herald, clinical research has shown that sleep deprivation is often linked to paranoia. Maybe that’s why the Prime Minister feels so threatened by ghosts that exist only in his imagination.

A failure to deal with Fiji blots regional forum’s copybook – writes Jenny Hayward-Jones in the Melbourne Age. Australia has a chance to guide Pacific nations on pressing issues.

Unions to wage bitter turf war in Pilbara – A turf war has erupted over union coverage of Australia’s export iron ore industry, prompting Julia Gillard to warn last night that unions would feel the “force of the law” if they engaged in disruptive and unlawful conduct – The Australian

Sotomayor Confirmed by Senate, 68-31 – Voting largely along party lines, the Senate on Thursday confirmed Judge Sonia Sotomayor as the 111th justice of the Supreme Court. She will be the first Hispanic and the third woman to serve on the court – New York Times

Tabcorp caught up in costly trifecta – A cost blow-out hit Tabcorp’s share price yesterday as the gambling giant announced it would have to spend an extra $100 million on redeveloping of its Star City casino in Sydney, bringing the project’s new estimated cost to $575 million. Tabcorp also announced that fees to the horse-racing industry might more than double next year – Sydney Morning Herald

Macpunter cash gets sucked into vortex – Michael West in the Melbourne Age compares a legal Macquarie externally managed trust scheme to an illegal Ponzi scheme and finds that while Ponzi artists are wont to employ equity alone, Macquarie artists favour both equity and debt to turbocharge their returns … and a smattering of hybrids.

China Balks at Global Warming-Gas Capture Costs – China can achieve larger emissions cuts instead by spending money improving the energy efficiency of buildings and vehicles and investing in alternative power sources such as wind and solar, said Su Wei, director-general of the climate-change unit at China’s National Development and Reform Commission – Bloomberg

Calls for Taronga Zoo welfare chief to resign – The chairman of Taronga Zoo’s conservation and welfare committee, Anthony English, has been called on to resign after it emerged he was an advocate of game hunting in NSW – Sydney Morning Herald

Social sites losing popularity with young – Social networking websites have lost some of their “cool” factor with younger users and are on their way to becoming the preserve of the middle-aged, according to figures published by Ofcom – Financial Times of London

Media mogul sets the digital deadline – It would be a safe bet Rupert Murdoch’s public confirmation of a deadline for News Corporation to charge for access to its digital content unleashed a thousand sighs across his organisation. While teams in News’ three capital cities — New York, London and Sydney — have been working on the right pay-for-content model for most of 2009, there is nothing like a deadline to clarify the work yet to be done – Matthew Stevens in The Australian 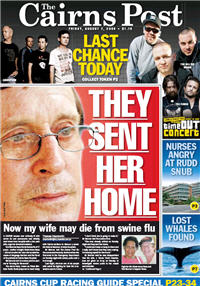 Contaminate fuel suspected to have damaged cars across Melbourne – The RACV and the Victorian Automobile Chamber of Commerce have reported cars needing urgent repairs for severely damaged engines, possibly as a result of contaminated fuel – Melbourne Herald Sun