Up to their ankles in sewage, a remote community’s patience runs out

The NT community of Ampilatwatja is overrun with raw sewage, and with complete inaction from the government, the residents have finally cracked.

Almost three weeks after the nation’s media reported up to 150 Aboriginal people had abandoned their sewage-soaked community in protest of the failing Northern Territory intervention, residents have still not received a visit from a single Territory or federal government bureaucrat or politician.

And so the community of Ampilatwatja — in the Utopia region just three hours north east of Alice Springs — waits. Dozens of residents — many aged into their 80s, but some just little children — remain in the desert, camping in the dead of winter, which reaches below freezing at night.

For some of them, shelter is a tent. For others, it’s simply a windbreak made of branches and leaves, or a blanket in the dirt. One elderly man is sleeping in the rusted-out shell of long-abandoned vehicle. He’s put corrugated iron up against the sides to try and keep out the wind.

The forced takeover of their community store in May by the government almost tipped the community over the edge. But as Ampilatwatja became overrun with raw sewage, courtesy of a hopelessly inadequate sewerage system and an overcrowded community — the residents finally cracked. 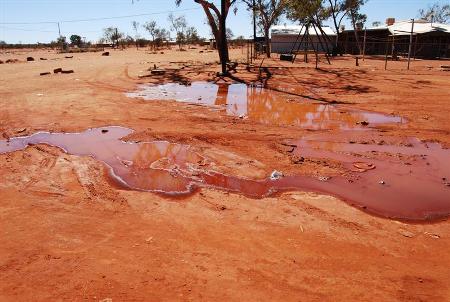 Sewage stream outside the community of Utopia

In mid July, they simply walked out of town, and established a protest camp three kilometres away, at the site of an old bore.

The only visit the community has had from government officials since is the arrival of some Barkley Shire Council plumbers, who fixed sewerage problems in a handful of houses.

A truck was also sent by the Shire to pump some of the sewage from the failing system, which was overflowing into the streets. Alice Brennan, the ABC journalist who broke the story of the walk-off three weeks ago, said the smell of the raw sewage made her and her cameraman dry-retch.

“Most Australians would expect to see that sort of thing in a third world country,” Ms Brennan said.

Not a single bureaucrat from the Henderson or Rudd governments have stopped by. And Minister for Indigenous Affairs, Jenny Macklin has so far ignored a letter co-signed by dozens of residents pleading for an opportunity to meet with government officials on the future of their community.

Their protest — and their plight — appears to have fallen on deaf ears. But community leader Richard Downs says if the government thinks it can simply “wait out” the community, they’re mistaken.

“I don’t know whether [the government] is trying to hide or what. I think maybe they’re ignoring it and hoping it will go away,” Mr Downs said.

“But look, the old people have said they’re quite happy out here. They’re going to stay. The young people are drifting back and forwards from the community — we’ve told the young people they’ve got kids and they’ve got to get them to school. And there’s some sick people (back at the community) as well. But they drift back and forwards and just come out and support us.”

Mr Downs predicted the protest could last months. It might even take on more than a temporary status.

“It could turn into a permanent camp. I’ve had a couple of calls from Sydney, there’s a lot of support building up,” he said. “We might get a little bit of funding from the unions to get the ball rolling. We’re camping on one of those old stock route bores with a windmill, so we’re looking at putting in a tank, a tap, some showers and toilets.” Barkly Shire President Rosalie Kunoth-Monks’ mother chooses to live in this lean-to in the Central Australian community of Utopia.

Federal Country Liberal Senator for the Northern Territory, Nigel Scullion also believes the government is mistaken if it thinks it can outlast the people of the Utopia region. Scullion and NT MLA Adam Giles (the Opposition spokesperson on Indigenous Policy) visited the community last week, and were “stunned and embarrassed” by the federal and NT government responses.

“It was national news,” Senator Scullion said. “They were up to their bloody ankles in sh-t, saying ‘We’re leaving our community.’ ‘Ho hum,’ said the Northern Territory government, ‘ho hum’ said the federal government. They’ve done bloody nothing.”

Mr Giles described the condition of housing in Ampilatwatja as the worst he’s ever seen anywhere in the nation. Aboriginal people who have abandoned Ampilatwatja are sleeping in whatever they can find.

Senator Scullion said he spoke directly to Jenny Macklin about the issue on Monday morning.

“I rang Minister Macklin and explained the circumstances I found there, and that they’re still waiting to hear from her three weeks later,” Senator Scullion told NIT. “I told the Minister that I think it’s really, really important that she or one of her representatives go to Ampilatwatja and speak to them. She thanked me for the information and that was it. I just hope she took it on board.”

Senator Scullion agrees with Mr Downs that the government is mistaken if it thinks it can ‘wait out’ the local residents. “If they think this community will just get tired of this and go back home, then they haven’t met these people,” he said. “They are determined. This is as significant an event to them as the Gurindji Walk-Off. This is a major event for them. They’re not trying to make some political point, they’re just asking for someone to bloody come and talk to them.”

The minister acknowledged in an interview with the ABC she had received the letter, was looking through it but would not commit to visiting the community. When asked if she was intending to visit the community, the minister told the ABC FACHSIA representatives would be conducting consultations in the region around mid August. One of the protest camps outside Ampilatwatja.

Mr Downs said the community remained strong in the face of the adversity.

“We’re a remote community. Our traditions and customs are still strong, our law’s still strong, Aboriginal way. We’re not going to let it go away — we’ve just had enough. This is the first time our mob is speaking up, because we never do — we’re generally very easy going and patient.”

“But our patience has run out.”

As far as I know soon after the Intervention started, contractors arrived at Ampilatwatja to paint the houses at $20,000 per house. This in a community that in the not too distant past used to paint their houses themselves. Now that the Intervention is in its third year a truck has been sent to pump out the septic tanks at $10,000 per tank (a moot point that the truck broke down causing further delay).
As someone living on a prescribed area I suspect that the media, politicians and bureaucrats have missed the point of the walkout. I believe that the walkout has very little to do with sewerage and everything to do with the way the authorities have systematically stripped away people’s initiatives, self-determination, respect and dignity. Its all about control and people’s rights to run their own lives as they choose.
Many years ago Kim Beazly Sr. put it thus:
“In Australia, our ways have mostly produced disaster for the Aboriginal people. I suspect that only when their right to be distinctive is accepted, will policy become creative”….
A great pity such vision has been all but ignored.

“Barkly Shire President Rosalie Kunoth-Monks’ mother chooses to live in this lean-to in the Central Australian community of Utopia.”

This is the home of Rosie Kunoth-Monks mother ( Ms Kunoth-Monks was the star of the 1950s movie Jedda), what isn’t mentioned is that the mother chooses to live in this shelter because of the appalling condition of the house offered to her; it beggars belief that any home would be worse than this for an old woman, or indeed anyone regardless of age. Considering that Rosie Kunoth-Monks, or as she was then Ngarla Kunoth, was about 16 when the film was made 50 odd years ago, her mother well over 80.

Haven’t any of these labourites heard of the waterless, solar powered, composting toilet. Most states, territories and local governments have them in remote locations like national parks/camping grounds/recreation areas. Why haven’t they been building them into remote indigenous housing communities? They are as cheap as chips and don’t pollute or waste water.

When oh when will somebody with a brain and the capacity to consult and negotiate take charge and start addressing these issues in a methodical manner. If we had this situation in a white community it would be all over the media with calls for urgent action. Regretably Jenny Macklin is yet to impress in this portfolio.Think outside the box, involve the community in the decision making and implementation and possibly achieve a lasting resolution.

You want to involve the community – Guess what !

No-one is stopping them having some pride in where they live now.

If it was in a white community they would be able to and would clean up their own shit.

I know these fellas are backward ( read traditional if you like ) but can they do anything for themselves?

Surely some basic maintenance and cleaning is not beyond them.

Buy them some tools Chris !
Get them off their lazy arses.
Quit whinging about stuff they can fix themselves.